As a result of Obamacare Medicaid expansion coupled with means-tested Obamacare assistance, I estimate welfare rolls expanded from 35.4% of the population in 2012 to  about 40% in 2014.

Let’s go through the math to see how I make that estimate.

When those receiving benefits from non-means-tested federal programs — such as Social Security, Medicare, unemployment and veterans benefits — were added to those taking welfare benefits, it turned out that 153,323,000 people were getting federal benefits of some type at the end of 2012.

It’s safe to say what direction this is headed. 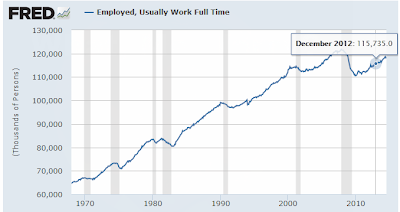 Inquiring minds may be asking “How did Obamacare effect welfare numbers?”

Anyone making up to 400% of the federal poverty minimum is eligible for some assistance. That’s about 17 million according to the Kaiser Family Foundation.

On June 4, the US Department of Health and Human Services reported Medicaid Enrollment Shows Continued Growth in April.

“As of the end of April, 6 million more individuals were enrolled in Medicaid or the Children’s Health Insurance Program (CHIP) as compared to the period before the initial open enrollment under the Affordable Care Act started.”

In addition to regular expansion of welfare, it’s safe to conclude Obamacare expanded the welfare rolls by at least 23 million.

Let’s take the 2012 welfare total of 109,631,000 and add the 6 million Obamacare Medicaid expansion and the 17 million who get Obamacare subsidies and you have a minimum of 126 million receiving some sore of means-tested welfare vs. 118.5 million who “usually” work full time.

Over 50% of the country gets welfare or some other form of non-means-tested assistance. I estimate about 56% or so.