The Smoking Graph: Janet Yellen Has Learned Nothing In 45 Years!

Mish Shedlock today published a truly scintillating graph by Doug Short on the 50-year trend in real hourly earnings for wage workers. This was in conjunction with yesterday’s releases on the CPI, which is back to 2% even on the official measure, and real hourly wages, which were down on a year-over-year basis—notwithstanding $700 billion of Fed QE bond buying in the interim.

And that gets right to the profound message of the Doug Short graph. Real hourly earnings of production workers at about $20.50 per hour in May were exactly the same as they were when President Lyndon Johnson was hauling his hunting dogs around by their ears back in 1968. More particularly, that’s when Johnson also manhandled the chairman of the Fed, William McChesney Martin, and forced him into printing money to finance his “guns and butter” outbreak of massive deficits.

As the chart shows, monetary inflation seemed to work for a few years because in those times of trade account surpluses organized labor was able to push up wage rates faster than the CPI. Accordingly, real wages reached an all-time record of $22.30 per hour in the early 1970. Ironically, the catalysts for that final wage push were soaring construction wages in NYC obtained by the building unions working on the World Trade Center, and a 70-day strike at GM which resulted in the bountiful UAW “pattern agreement” that ultimately took Detroit down.

More importantly, the surge of Fed-fueled inflation in the late 1960s also took down the monetary system and paved the way for today’s destructive monetary central planning which erodes main street living standards and gifts the 1% with speculative windfalls on financial assets. Specifically, the CPI had averaged about 1.2% annually between 1953 and 1965, but then soared to upwards of 6% by 1970-1971( a level never seen outside of the two world wars and post-war demobilizations after the Fed’s opening in 1914).

Equally importantly, as the Fed’s excessive monetary expansion inflated domestic demand, wages and other costs, America’s long standing trade surplus with the outside world (since 1893) went drastically south, owing to a massive surge of imports to meet booming consumption and capital goods demand. The latter could not be supplied by a red hot domestic economy in which the unemployment rate was below 3.5% and practical capacity utilization rates were well over 100%.

The import tsunami, in turn, caused the current account to hemorrhage red ink, meaning that there was a massive outflow of dollars which ultimately ended up in the major foreign central banks— as they furiously printed their own currencies in order to mop up unwanted dollars. Yet in those waning days of the Breton Woods fixed exchange system the US was obligated to redeem this rapidly accumulating hoard of offshore dollars for the international settlement asset, gold, which J.M. Keynes himself had designed at the 1944 conference.

Needless to say, Richard Nixon was not about to allow America’s gold to be exchanged for the unwanted dollars that he and Johnson had forced the Fed to create; it would have resulted in a rip-roaring recession right in time for the 1972 election. In truth, however, it would have merely amounted to an unavoidable and necessary liquidation of the excess domestic demand and the wage-cost spiral that Fed policy had generated in the first place.

The rest is history, and I have tried to lay-out the full story in my book, The Great Deformation: The Corruption of Capitalism In America. Suffice it to say here that Nixon {adinserter 1} slammed shut the doors at Fort Knox during his infamous Camp David weekend in August 1971, and announced to the public that the then overwhelmingly most productive and richest economy in the world would default on its solemn obligations to keep the dollar good as gold at $35 per ounce.

That colossal error essentially destroyed the basis for fiscal and monetary discipline, not only in the US but in the entire world economy. More importantly, for the last 45 years it has proved the neo-Keynesians were completely wrong during the 1960’s when they continuously beat the drums for “easy” money at the Fed, and essentially made the argument for “inflation in one country”.

The chief gummer for that proposition, ironically, was Professor James Tobin of Yale who got a Noble prize for rediscovering the folly of inflationism—something practical men of the world had left behind about 1870. He was also the PhD advisor and tutor of Janet Yellen, the nation’s current chief money printer, who is utterly blind to the half-century of repudiation of the Tobin thesis implicit in Doug Short’s graph.

“Inflation in one country” is an instructive variation on the early 1920’s doctrinal shift by the Leninist butchers in Moscow, who abandoned fomenting worldwide revolution in order to build a totalitarian state (“socialism in one country”) within the post-war Soviet borders.  But what the Soviet’s did was seal their borders to the outside world except for limited and very carefully controlled western investments to rebuild their decimated transportation and industrial infrastructure.  By contrast, when the US floated the dollar, the opposite condition pertained: our borders were wide open to trade, capital flows and short-term financial movements.

Effectively, the neo-Keynesians ignored their master’s conversion to protectionism in 1931. Instead, they proposed to have their cake and eat it, too. That is, monetary inflation at home and free trade abroad.

But that was a colossal violation of every principle of sound money. What happened is just the opposite: rather than inflating real wages and real living standards at home, the destruction of Breton Woods resulted in the vast inflation of imports. The latter were pulled into the American economy by continuous inflation of domestic demand by the Fed and the relentless expansion of domestic credit through which it was accomplished.

As the graph shows, inflating wages and costs at home didn’t work as Tobin predicted and for obvious reasons: even then it was evident that there were about 3 billion peasant farmers in the world who could be mobilized into a cheap industrial work force under the right conditions. And that “condition”, in fact, was exactly what Milton Friedman, the so-called anti-Keynesian doctor, ordered.

Professor Friedman was an arrogant and naïve academic who could not have understood politics if it hit him in the head with a 2X4. The “floating dollar” that he urged upon Nixon at Camp David had nothing to do with “price discovery” on the free market; instead, it became an instant “dirty float” whereby foreign governments pegged their currencies at sub-economic levels in order to implement a mercantilist export -based development model.

In short, after 1971 the entire world got caught up in a monetary delusion. Namely, the misbegotten notion that sustainable economic growth can be achieved by relentless credit expansion at home and a continuous race to the currency bottom aboard.  It is only a matter of time before this entire house of cards begins to collapse, and the signs are already abundant in the two chief practitioners—-China and Japan.

In the interim, however, the US was enabled to experience the greatest debt and unearned consumption party in recorded history. At the time that the Tobin/Friedman theories were implemented, total private and public debt outstanding in the US was about 150% of national income—a level which had pertained during good times and bad, and during war and peace, for nearly 100 years of steady growth in worker incomes and real living standards.

Today, the ratio stands at 350% of national income. These two extra turns of leverage mean that current total credit market debt of nearly $60 trillion is more than $30 trillion greater than would have obtained under the pre-1970 regime of honest money and international financial discipline. In effect, the explosion of credit allowed domestic households to off-shore their own real wages and living standards in return for a temporary binge of credit fueled consumption.  They did so by racking up deep, continuous current account deficits with our off-shore vendors. The tab now exceeds $8 trillion since the Camp David default.

That is the true meaning of the Doug Short graph below. It is also fitting evidence of the fact that Janet Yellen has learned exactly nothing since she sat at her master’s misguided knee. 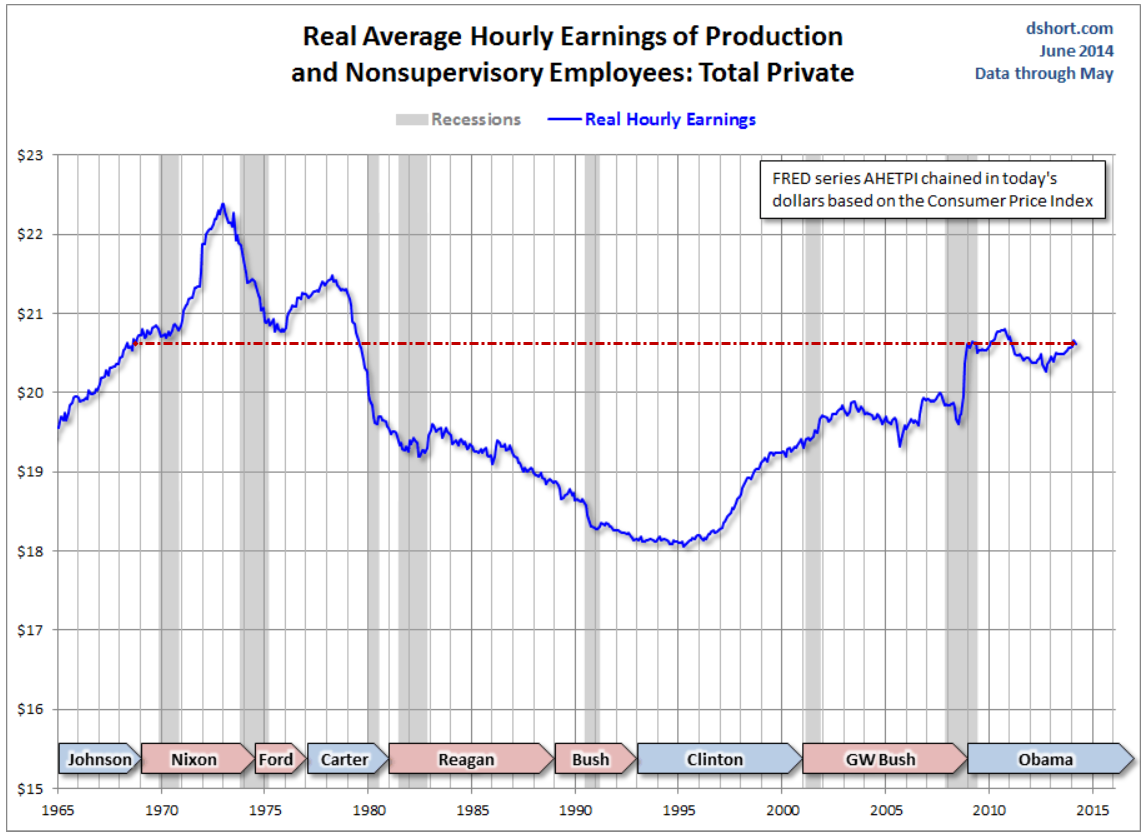