Three Chart Alarm: The Fed Has Set-Up The Corporate Bond Market For A Big Fall

The three charts below, which appeared in this morning’s Wall Street Journal, are still another reminder that the Fed’s heedless fueling of the third financial bubble this century has done enormous damage to the internals of financial markets.  In this case, investors and savers being brutally punished by ZIRP were herded into bonds funds in a desperate scramble for yield. Accordingly, bond fund assets soared from $1.6 trillion at the time of the financial crisis to $4.1 trillion today.

Yet the market’s structural liquidity condition has gone in the opposite direction. Dealer inventories of corporate bonds have plummeted by nearly 75% from pre-crash levels, meaning that the ratio of dealer inventories to bond fund assets has virtually been vaporized. In 2008 that ratio stood at 15%, but presently it is only 1.5%.  Likewise, daily trading volumes have been cut in half since the crisis.

The implication is no mystery. When the financial markets eventually succumb to a “risk-off” selling panic, the corporate bond market will gap down violently. As one astute analyst put it:

“Everyone is hoping to be first through the exit,” said Matt King, global head of credit strategy at Citigroup C in Your Value Your Change Short position in London. “By definition, that’s not possible.”

Stated differently, the Fed’s explicit campaign to force grandpa out of CDs and into corporate bond funds has caused a vast mis-pricing of liquidity. In a healthy free market, bond fund yields would carry a significant discount for illiquidity, and issuers of riskier corporate credits would face far higher yield spreads vs. the 10-year treasury benchmark.

So once again, the serial bubble machine in the Eccles Building has generated a huge unnatural market deformation that is inherently unstable and increasingly fragile. When the break comes, years worth of “extra” yield will be wiped-out in a traumatic drop in bond prices caused by a panic at the exit ramp. 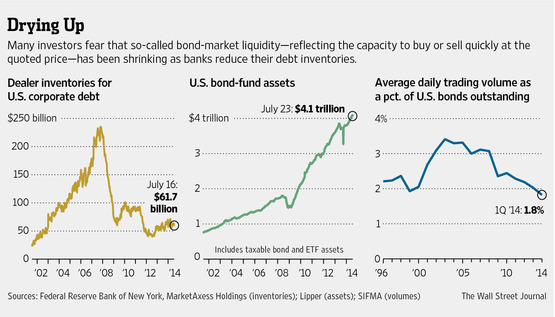 As the balance of the WSJ article makes clear, the risk of log-jam at the exit gates is especially acute in the $1.6 trillion junk bond market. Prior to last week’s initial sell-off, yield spreads had been squeezed to absurdly low levels—less than 300 basis points on the Merrill index. Based on the current rate of inflation and historic 4-5% long-term losses on junk bonds, the spread should be 600 basis points or more. Indeed, during the last junk bond sell-off in 2008-2009, the yield spread over the treasury benchmark blew-out to 2000 basis points before the Fed’s artificial flood of liquidity put a stop to the carnage.

But today the junk bond market is far larger; trading liquidity is far thinner; and the Fed has already used up its trick card—that is, zero interest rates and massive monetization of the public debt. Accordingly, the carnage at the junk bond exit ramp is likely to be far more extensive this time around.  More importantly, the punters who harvested gargantuan profits by buying junk at peak yields in the spring of 2009 may find that the fire brigade in the Eccles Building is MIA when the next crash hits bottom.

By Katy Burne  at The Wall Street Journal

A shakeout in the junk-bond market is drawing only cautious interest from bargain-hunters, underscoring investor fears that many once-hot securities could prove hard to sell in an increasingly difficult trading environment.

U.S. funds investing in debt rated below investment grade lost an average 1.33% last month, according to a BarclaysBARC.LN in Your Value Your Change Short position PLC index, their second-worst monthly performance since November 2011. In June 2013, after the Federal Reserve began hinting that it would scale back its monetary easing, they lost 2.62%. 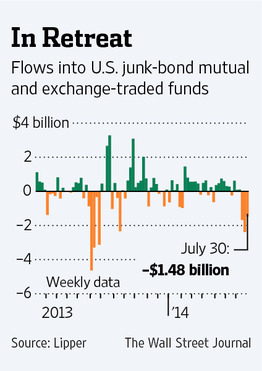 The latest junk-bond decline intensified last week as investors continued to make heavy withdrawals of money, in part because of worry that a recharged U.S. economy could prompt the Fed to raise interest rates sooner than expected, a move that would likely pressure bond prices.

Reflecting the cautious mind set, some portfolio managers are selling riskier bonds and replacing them with safer ones because of concern about market liquidity, or the capacity to quickly buy or sell securities at or near quoted prices. Many investors say liquidity is drying up as the Fed pares its monthly stimulus and large banks trim their bond inventories.

Investors pulled more than $5 billion in July from U.S. junk-bond mutual and exchange-traded funds, according to Lipper, a fund tracker, deepening the liquidity fears and adding to concern that the recent selloff could intensify…..

The downdraft in junk debt highlights concerns that purchasers in the $1.6 trillion U.S. market, lured by higher income than on government and highly rated corporate bonds, have paid too much for the securities. Prices have rallied, sending yields to levels too low to compensate buyers for the risk of the investments, many investors say.

The tremors are being closely scrutinized across Wall Street. Many investors this year have expressed concerns that a pullback in junk-bond prices could signal that market participants are rethinking their willingness to take risk, foreshadowing further declines in stocks and other risky assets.

The conditions are heaping extra pressure on sellers at a time when geopolitical unrest from Israel to Ukraine has caused a pullback from stocks and all but the safest debt securities. The Dow Jones Industrial Average has dropped seven of the past eight trading days and is down 0.5% this year.

Jim Swanson, chief investment strategist at MFS Investment Management, which oversees about $438 billion, said he has been demanding extra yield on some bonds to reflect the risk that selling could take longer, and avoiding some less-liquid bonds. “There’s a question of what happens when everyone tries to sell [bonds] at once, and I want compensation for that,” he said.

Brian Connolly, co-founder of hedge fund Millstreet Capital Management in Boston, which oversees more than $200 million in assets, said he recently tried to sell $3 million of energy company bonds but couldn’t find buyers for three days. Typically such a sale takes a day at the most, he said.

“It has become increasingly harder to trade,” he said.