2007 All Over Again—-Banks Starting To Implode

By John Rubino at Dollar Collapse

So far, each financial crisis in the series that began with the junk bond bubble of 1989 has been noticeably different from its predecessors. New instruments, new malefactors, new monetary policy experiments in response.

But the one that’s now emerging feels strikingly similar to what just happened a few years ago: Banks overexposed to assets they thought were safe but turn out to be highly risky see their balance sheets deteriorate, their liquidity dry up and their stocks plunge.

This time it’s starting in Europe, where bank stocks are down by over 20% year-to-date and credit spreads are exploding. For a general look at this process see Is Another European Bank Crisis Starting?

Not surprisingly, the scariest stories are emanating from Italy which, despite inventing the mega-bank concept during the reign of the Medici, seems unable to grasp how money actually works. Check out the following Wall Street Journal chart of non-performing loans. When 16% of an entire country’s borrowers have stopped making their payments, that country is pretty much over. 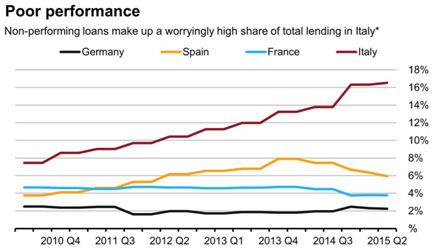 All eyes are therefore on Italy’s Banca Monte dei Paschi, which has a non-performing loan ratio of 33% and, as a result, a plunging share price. When the Italian economy finally blows up, this will probably be where it starts.

But here the story takes an even more disturbing turn. It seems that the other lender now spooking the markets is none other than Deutsche Bank, pillar of the world’s best-performing economy. Shockingly-bad recent numbers have combined with questions about its mountain of derivatives and exotic debt to put DB in a very uncomfortable spotlight. Excerpts from analysis of the aforementioned debt:

(Wolf Street) – Shares of scandal-plagued, litigation-hammered, loss-ridden Deutsche Bank, one of the largest and least capitalized megabanks in the world, closed at €16.32 today in Frankfurt, down 50% from April last year. Investors are fidgeting in their seats, cursor on the sell-button.In October, it had announced that it would shed divisions, clients, and employees, and hopefully some risks, and that it would scrap its dividends.

January 20, the bank reported “earnings” – in quotes because it was a sea of red ink. It had lost €2.1 billion in the fourth quarter, including €1.2 billion in its investment banking division where revenues had plunged 30%. This brought “earnings” for the year to a record loss of €6.8 billion.

All these losses, write-offs, and fines have eaten into Deutsche Bank’s already low capital buffer. To prop up Tier 1 capital, Deutsche Bank had issued the equivalent of €4.6 billion (about $5 billion) in “contingent convertible bonds,” spread over four issues, two in dollars, one in euros, and one in pounds – something for everyone.

These CoCo bonds, as they’re called, are special: The bank can call them after a certain date but doesn’t have to redeem them; annual coupon payments are contingent on the bank’s ability to stay above certain cash and capital requirements, as specified by German and European banking regulations; and investors cannot call a default if the bank fails to make the coupon payment.

Despite the risks, yield-desperate investors eagerly gobbled them up. Now Deutsche Bank is just a hair away from breaching the limits. And there’s a lot of nail-biting.

Meanwhile, it’s not clear what policy changes, if any, will save the day:

A Wounded Deutsche Bank Lashes Out At Central Bankers: Stop Easing, You Are Crushing Us

(Zero Hedge) – Ten days ago, when Deutsche Bank stock was about 10% higher, the biggest German commercial bank declared war on Mario Draghi, as we put it, warning him that any further easing by the ECB would only push stocks (with an emphasis on DB stock which has gotten pummeled over the past few months) lower. What it got, instead, was a slap in the face in the form of a major new easing program when the Bank of Japan announced it is unveiling negative rates just three days later.Which is why overnight a badly wounded Deutsche Bank has expanded its war against the ECB to include the BOJ as well, and in a note titled “The Risks From Further ECB and BOJ Easing” said the benefits to risk assets from further easing no longer exist, and in fact the “impact has been exactly the opposite.”

In other words, we have reached that fork in the road within the monetary twilight zone, where Europe’s largest bank is openly defying central bank policy and demanding an end to easy money. Alas, since tighter monetary policy assures just as much if not more pain, one can’t help but wonder just how the central banks get themselves out of this particular trap they set up for themselves.