By David Collum at Peak Prosperity

I am penning my seventh “Year in Review.” These summaries began exclusively for myself, evolved into a sort of holiday cheer for a couple hundred e-quaintances with whom I had been affiliating since my earliest days as a market bear in the late ’90s, and metastasized into the Tower of Babble—longer than a Ken Burns miniseries—summarizing the human follies that capture my attention each year.1–7 Jim Rickards kindly called it “a perfect combination of Mel Brooks, Erwin Schrodinger & Howard Beale.” I wade through the year’s most extreme lunacies as well as a few special topics while trying to find the overarching themes. I love conspiracy theories and detest detractors who belittle those trying to sort out fact from fiction in a propaganda-rich world. My sources are eclectic, but I give a huge hat tip to sites like Peak Prosperity and Zerohedge. If half of what they say is right, the world is a very weird place.

In an e-mail in early April, I told a friend and Master of the Universe that I wasn’t grasping the year’s theme. He assured me the year was young, but I had a deeper angst. I eventually realized that I had ascended Mount Stupid (Figure 1) and may be heading down The Far Side. Whether we are talking Greece, the Middle East, monetary policy, bonds, domestic politics, or sex changes, I am baffled by it all. Maybe life in the third millennium is like a sci-fi movie: it doesn’t have to make any sense. So my qualifications to comment on geopolitics are not in dispute: I am an organic chemist, a clueless academic one at that. Nothing should inspire you to read on. But—a big Kim Kardashian butt—I have somehow managed to capture a readership. 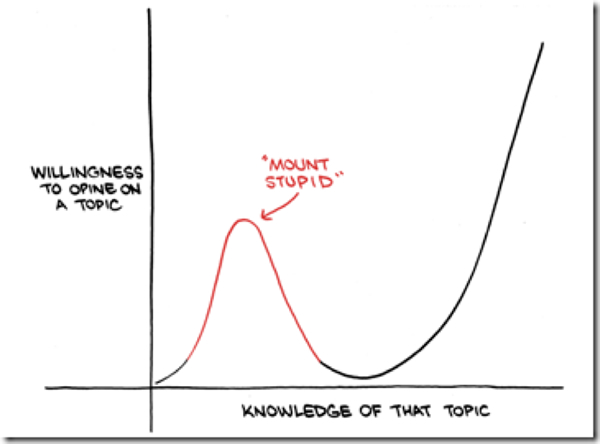 Occasionally I get a few selfies with prominent players, airtime on Russia Today, and some ink in The Guardian and Wall Street Journal.1 All help keep the ruse going. As this review is being uploaded to Peak Prosperity and soon thereafter to Zerohedge (hopefully). I offer just a little more elevator résumé disguised as a survey of personal events. My favorite interview this year was with a colleague-and sponsored by Cornell.8 I did podcasts with the likes of James Kunstler,9 Chris Martenson,10 Ed Rankin,11 and Jason Burack.12 Four BTFD.tv episodes chaperoned by Bob Lehman included a solo shot,13 two with Eric Hunsader of Nanex,14,15 and the last as a threesome with Eric and Joe Saluzzi,16 founder of Themis Trading and author of Broken Markets. A gig at the Stansberry Investment Conference in Vegas landed me some free meals and a shared stage with some actual famous guys. (Porter Stansberry is a self-proclaimed huckster and, in my opinion, brilliant.) The title of my talk was “College Life: The Good, the Bad, and the Ugly.” It came out a week before Yale and Mizzou went batshit and mercifully hid behind a paywall while outrageously uneventful ideas triggered mayhem across college campuses. I even found my nose stuck in the tail end of the Tim Hunt scandal, which I talk about herein. Last, I’m taking a bow for using a single Tweet to nip some corporate misbehavior in the bud.17 Ya gotta tweet ‘em right.

I draw inspiration from a Bloomberg headline:18

And with that, I am obliged to offer the following:

We face an epidemic of wusses, which is sanitized for “pussies,” which some believe finds its origins at pusillanimous. This document is laced with childish tripe, microaggressions, horsemeat, rat hairs, human DNA, central bankers, and presidential candidates. If I’ve already offended you, I apologize. (Just kidding. It only gets worse.) But you need not read on.

Presenting such a review poses a multitude of challenges. There are important topics from past years that remain important but will not be repeated. How many times can one rail on underfunded pension plans, unfunded liabilities, or a quadrillion-dollar derivatives market? These matters are important, but the plot line doesn’t change much year to year. I’m skipping right over Japan; it’s a basket case, but not enough has changed to spill some ink. Despite reams of accrued notes and links, I am light on the Middle East because nobody understands it (or eats parsley.) It’s that Mount Stupid descent again. I leave topics like global warming, mass shootings, and Israel versus Palestine to those who like to shout a lot. Other ideas manage to stay at center stage year after year. Compartmentalizing the topics can seem artificial. How does one separate broken markets from the Federal Reserve? Sovereign debt levels from bond markets? Government from civil liberties? It is also laced with blogger porn (quotes). Somehow 450 pages of notes, quotes, and anecdotes describing a web of interconnected concepts must be distilled into the “Year in Review,” all in a few short weeks. So let’s head to the choppers.