The Low Wage Employment Tsunami———-Now 25% Of All US Jobs

The employment report continues to provide deceptive bread and circus fodder for the mainstream press.  Never is any thorough analysis given to the 93+ million Americans that are now part of the “not in the labor force” category.  In large part, we have a low unemployment rate because this massive army of Americans is simply not counted in the employment report.  Then, if you dig deeper into the report you realize that a wide spectrum of Americans are now part of the low wage economy.  The “recovery” in terms of jobs can be summed up as follows: tons of low paying work, a shrinking of middle class jobs, and few jobs at the top.  It is a crony salad bowl of financial incentives to the banking sector while turning a large portion of the country into modern day debt serfs.  You need debt to keep up.  Good debt (i.e., mortgages) is now tougher to get since banks have crowded out regular families in buying homes.  Junk debt (i.e., auto loans) is easy to get and you can simply drive down to your local car dealer and drive away with a new car.  With that said, the US has a massive number of workers employed in what are known as low wage jobs.  The number is surprising when compared to other nations.

There is more to your pay than your hourly rate.  Many people have faced the multi-faceted attack on their living standards via:

-the destruction of pensions

In other words, most financial decisions have been shifted onto an already poorer nation.  In many cases profits have been on the rise in Wall Street because of stagnant wages and the deep cutting of benefits.  The US now has a large portion of its labor force in low wage jobs.  This is problematic when the cost of housing, healthcare, cars, energy, and college all seem to be rising at breathtaking speed.

Take a look at this chart showing the percentage of workers employed in low wage jobs across various countries: 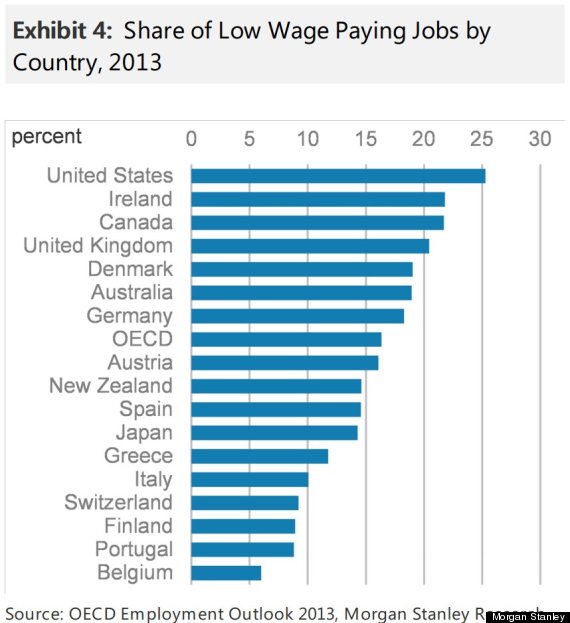 Why is this problematic?  Part of the bigger problem at hand is that many are unable to save and plan for retirement.  Take a look at the current retirement crisis with baby boomers.  Most would be in abject poverty if it were not for Social Security.  And this is a generation that grew up in a robust stock market with nearly every advantage at hand.  And with that, most are facing retirement with little in their nest egg.  How about the upcoming generation of low wage workers?  Take a look at this chart: 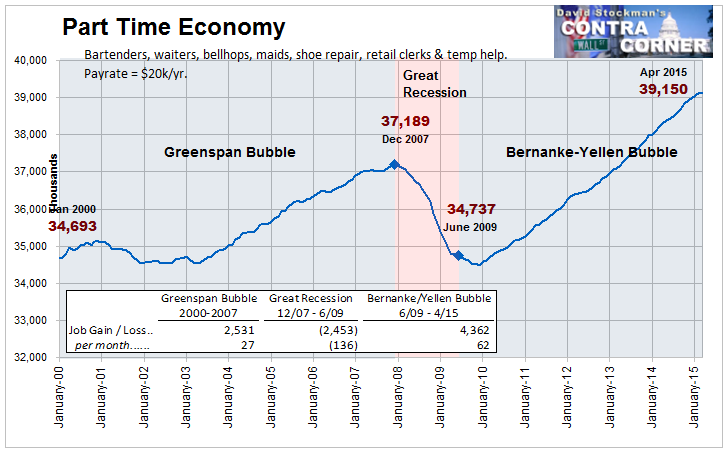 In terms of “growth” we have done a fantastic job of Chipotle-ization of our economy.  Close to 40 million Americans now work in the low wage part-time economy where wages fluctuate and benefits are virtually non-existent.  How many bartenders, waiters, bellhops, maids, shoe repair workers, and retail clerks are putting money away for retirement?  No big deal you might say.  But what happens as the passage of time throws these folks into retirement?  An inverted pyramid can only hold so much weight at the top with a tiny bottom.

That bottom is having a tougher time supporting the top because the bulk of our population doesn’t make all that much money: 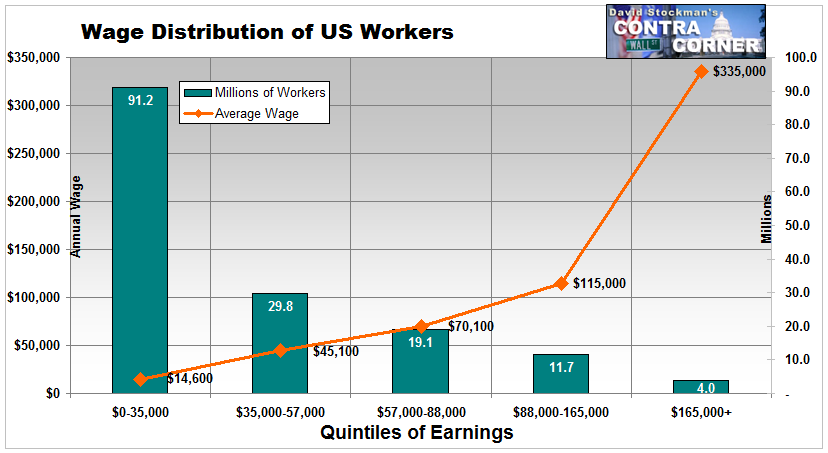 Source: The low wage employment tsunami: Low wage jobs now make up 25 percent of all employment in the United States.