By MARK PETERS and BEN LEUBSDORF at The Wall Street Journal

Hopes for an American export boom are wilting under the weight of a strong dollar and global economic strains.

U.S. exports are on track to decline this year for the first time since the financial crisis, undermining a national push to boost shipments abroad. Through July, exports of goods and services were down 3.5% compared with the same period last year. New data released Tuesday by the Commerce Department showed that exports of U.S. goods sank a seasonally adjusted 3.2% in August to their lowest level in years.

The weak trade performance is restraining overall economic growth, a sign of how troubles in China and other major economies are dinging the U.S. economy.

It didn’t seem that way in 2010, when President Barack Obama set a goal of doubling exports over five years. Some big cities took up the challenge, including Portland, Ore.

Facing a battered economy at home, Vanessa Keitges, president of Portland-based Columbia Green Technologies, lined up sales in Belgium and New Zealand. In Canada, she chased public-building projects and Wal-Marts. Within three years, one-quarter of the green-roofing company’s sales were outside the U.S. 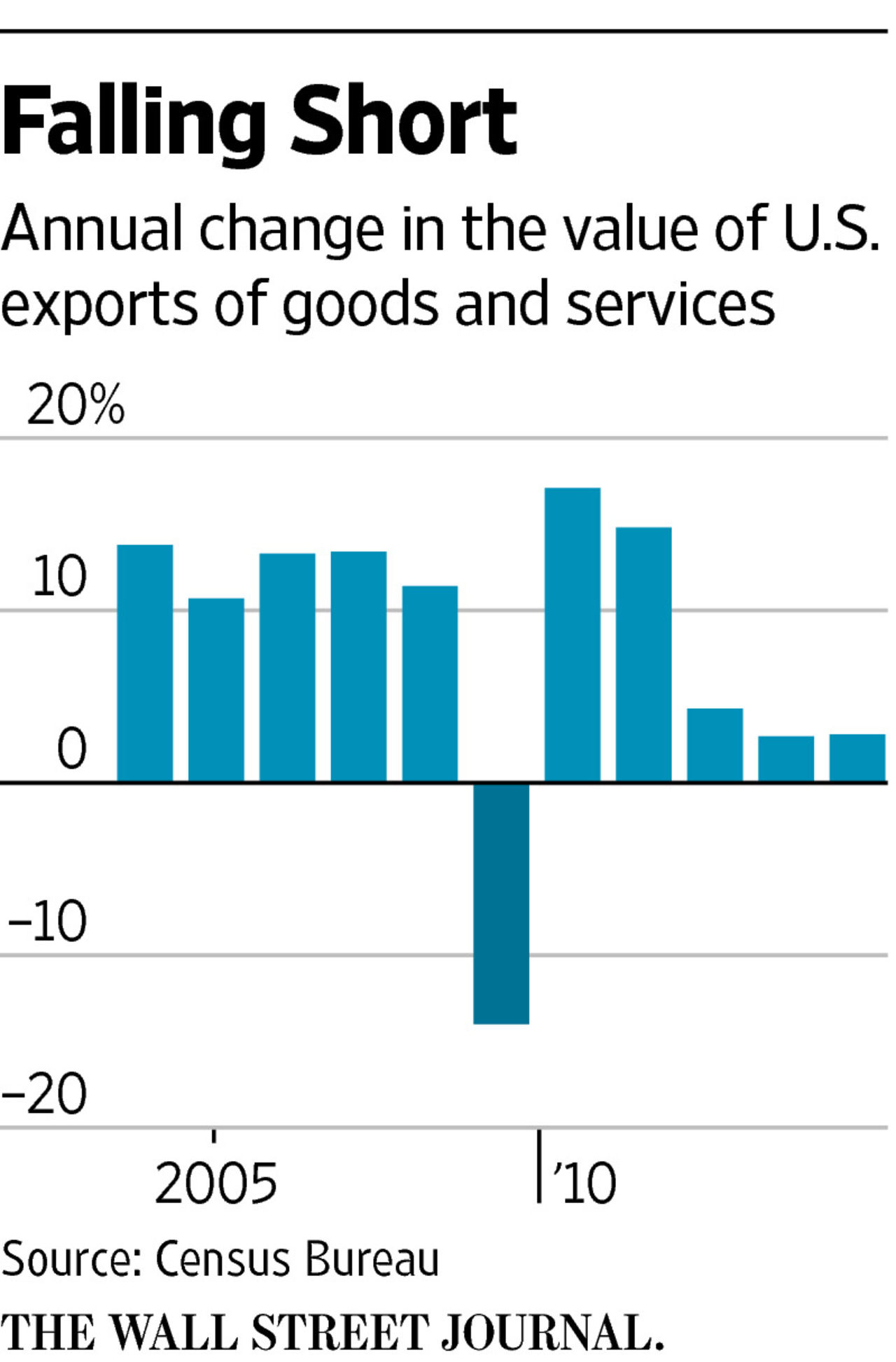 But that proved to be a high-water mark for the company’s foreign ambitions. Ms. Keitges is now focusing on the strengthening domestic market for the company’s rooftop planters as weak growth abroad tempers demand and a strong dollar creates pricing problems.

Exports seemed a golden opportunity as Portland and the rest of the nation emerged from the 2007-09 recession. Foreign sales were a major contributor to U.S. economic growth in 2010 and 2011, outstripping past recoveries. Political leaders hoped selling goods and services abroad would offer a sustained boost to the job market at home.

But the dream of an export boom has faded.

As unemployment has declined, American consumers have reasserted their dominant role in driving economic growth. And a strong dollar and weakness overseas have helped turn international trade into a drain on overall economic growth in four of the past six quarters.

The Federal Reserve worries exports will be a persistent drag on the broader economy going forward. Fed Vice Chairman Stanley Fischer in August said it was “plausible to think that the rise in the dollar over the past year would restrain growth…through 2016 and perhaps into 2017.” If the Fed begins to raise short-term interest rates later this year, that could provide new fuel to push the dollar’s value even higher.

The administration is looking to spur trade growth through agreements such as the Trans-Pacific Partnership. Senior officials from around the world are meeting in Atlanta, trying to complete the expansive trade deal after talks stalled earlier this year.

It isn’t just the U.S. where exports have been a disappointment in recent years. Globally, growth in trade volume is set to trail the pace of economic growth for the third year in a row, and trade growth has been averaging just half its pre-financial crisis pace.

In the immediate aftermath of the recession, confronted by weakness in the domestic economy, U.S. policy makers saw opportunity in global markets.

Following Mr. Obama’s lead, the Portland metro region in 2012 set its own goal to double its exports in five years. “This is how we fight for jobs in the next economy,” then-Portland Mayor Sam Adams declared.

In the past year, Portland has quietly shelved that aim. The value of Portland-area exports actually declined slightly between 2012 and 2014, according to tallies from the Commerce Department and the Brookings Institution, a Washington think tank.

After Portland set its goal, economic conditions started to shift. The value of major currencies declined relative to the dollar, making American-made goods more expensive for foreign customers. Growth slowed in key markets such as China and Canada. At home, the U.S. economy regained its footing.

Over the past year, Portland first was caught up in a labor dispute that caused gridlock at ports along the West Coast, then it lost regular ocean-bound container service. Local officials also came to realize export growth depended overwhelmingly on chip maker Intel Corp., which has extensive facilities in the Portland suburbs.

Exports of computer and electronic products helped drive a more than doubling of the metro area’s exports between 2003 and 2008, according to Brookings. But Intel has suffered from a slowdown in demand for personal computers.

Measurable gains from smaller companies are likely to take years to materialize. Federal estimates show only about 5% of U.S. firms export, with nearly two-thirds of the annual value concentrated among 500 companies.

Hand-tool maker Astro Tool Corp. in the Portland suburb of Beaverton has seen many of the challenges up close. Over the past year, general manager Mike Barnes dedicated half his time to chasing foreign customers, while still overseeing day-to-day operations of the 30-employee company. He faced a steep learning curve. “We, A, didn’t know how to do it, and B, we didn’t have the money to do it,” he said. “You can’t just go to the Internet and say, ‘Where do we find foreign opportunities?’ ”

He eventually landed a small grant to hire a consultant and tapped connections for advice. The share of Astro’s business coming from overseas climbed over the past year to 25% from 15%. But he also watched at a trade show as a foreign competitor sold a cheap, knockoff version of a product similar to his.

The Portland region is trying to court foreign companies that already incorporate exports into their business model. But those companies aren’t immune to global pressures.

Two years ago, exports were nearing 70% of the sales of Shimadzu USA Manufacturing Inc., a subsidiary of the Japanese maker of instruments to test everything from wine fermentation to the urine of Olympic athletes. Now the plant in an industrial park at the far southern edge of metro Portland is getting closer to 50-50 as domestic growth outpaces sales gains abroad.

Foreign customers “can get it cheaper from Japan now than they can from the United States. We’re not as competitive as we were,” said Joe Shaddix, vice president of operations and manager of the factory, referencing the strong dollar.

At the same time, domestic demand for test instruments is developing among marijuana growers as states move to legalize the drug. The factory has expanded what it can make, becoming U.S. Food and Drug Administration registered.

Mr. Adams, the former mayor, remains a strong advocate for the goal of doubling exports—if not by 2017, then eventually. He worries the Portland economy isn’t keeping up with the quality of life that draws twenty- and thirty-somethings at an enviable rate.

“Obviously the timeline will move, but keeping that goal front and center is key,” he said.