A Deflationary Gale Is Storming Out Of China—–Can You Say Malinvestment?

By LINGLING WEI, BOB DAVIS and JON HILSENRATH at The Wall Street Journal 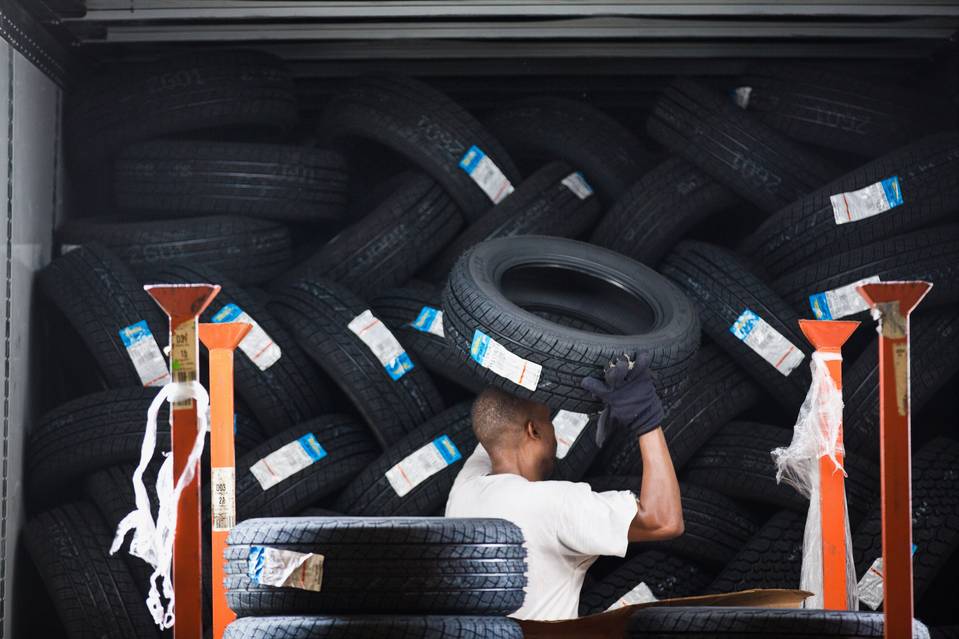 ENLARGE
A worker loads a truck with tires from Del-Nat Tire, a distributor in Memphis, Tenn., that found itself stuck with high-priced inventory after tire prices declined because of overproduction in China.

DONGYING, China— Liu Zijun built a thriving tire-manufacturing business when China’s economy was roaring ahead. But when China’s growth weakened, he had to cut prices to keep his business afloat.

Now the pain felt by industrialists such as Mr. Liu is reverberating across the globe, showing how China, once the world’s most reliable source of growth, is adding to deflationary pressures world-wide.

In the rubber-tree fields of Southeast Asia, planters are scrambling to cut prices for their latex fast enough to keep customers in China happy. In the U.S., tire distributors are marking down prices and some are cutting staff as China floods the U.S. with discounted goods from unneeded factories.

“The growing production capacity in China changed the U.S. industry,” said Brian Grant, chief executive of Del-Nat Tire Corp., a Tennessee tire distributor that exited the business early this year after chalking up losses on overpriced inventory it had bought before prices fell.

A dozen years ago, low-cost workers from the countryside poured in to China’s factories, helping bring down the cost of everything from T-shirts to tricycles.

Then the country’s booming demand for commodities such as oil and cotton helped to reverse that downward inflation trend, as natural-resource prices surged. Now, China’s excess manufacturing capacity and slowing growth rate are changing the equation again, putting renewed downward pressure on prices.

Milk producers in New Zealand, coal miners in Australia and sugar growers in Brazil have been forced to cut their prices after finding they had overestimated commodity demand from China. At the same time, Chinese manufacturers, stung by their country’s economic slowdown and excess capacity, are flooding export markets with finished goods such as tires, steel and solar panels.

Global deflationary pressures emanating from China are symptomatic of wider demand issues gripping economies from South America and Europe to much of Asia. China is far from the sole cause of price weakness; others include new crude-oil supplies in North America and sluggish growth in Europe. But China’s sheer size, reach and central role in global manufacturing make it a potent force.

For U.S. consumers, that is good news. But for policy makers and corporate executives, declining prices present a real challenge. The declines can sap profitability, deter investment and block wage growth, all of which are needed to help the world break out of its years of underwhelming growth.

U.S. prices for services, which are affected by domestic factors such as the cost of labor, are running close to the Federal Reserve’s target of 2% annual inflation. They could move higher still as the job market tightens.

But U.S. goods prices, which are more susceptible to global trade winds influenced by China, have been running well below the Fed’s inflation target since 2012, and entered outright deflation in 2013.

Overall, the Federal Reserve’s preferred measure of annual U.S. consumer price inflation was 0.1% in April. Soft prices of commodities, particularly oil, and declining import prices have been contributors. This U.S. inflation measure hasn’t been above 2% since early 2012.

China’s role in weak price growth world-wide is becoming increasingly apparent as the country struggles to absorb all of the plant capacity it has added. Prices at the factory in China have fallen for more than three years, pressuring the People’s Bank of China to ease credit conditions and bring down borrowing costs in hopes of spurring consumption and broader economic growth.

Still, PBOC officials worry that such moves could make matters worse, by channeling money to industries that already have excess capacity and are looking to export away their problems. The risk is that cheap money spurs even more expansion of Chinese manufacturing capacity.

With China’s slumping construction industry requiring less steel than had been expected, the country has become a massive global exporter of the metal, weighing on global prices.

UBS analysts estimate the world has excess steel-production capacity of 553 million metric tons a year, much of it in China. That is enough to build more than 10,000 modern aircraft carriers a year, or the Eiffel Tower 75,000 times annually.

The price of a common steel product called hot-rolled coil has dropped by 44% since March 2012, according to McGraw Hill’s Platts unit. Other prices are falling with it, including those for iron ore, coking coal and scrap metal.

A fundamental mismatch of supply and demand haunts other industries. In 2013, Chinese authorities named 19 sectors plagued by overcapacity in the country, including cement, aluminum, copper, chemical fiber and paper.

“This has happened again and again in markets, but this was on a super scale,” said Daniel Yergin, vice chairman of the Colorado market-research firm IHS Inc. “People invest, but they don’t see what everybody else is doing at the same time.”

The troubles in China’s tire industry provide a glimpse of how pernicious deflationary pressures can be.

Between 2000 and 2013, China’s tire production soared threefold to about 800 million tires a year as the country grew into the world’s biggest auto market, according to Fredonia Group, a market-research firm in Cleveland. Producers exported many of those tires, occasionally drawing complaints from tire industries in the U.S., Brazil, Turkey, India, Colombia and Egypt that China was dumping its excess supplies on their markets. All six nations imposed tariffs on Chinese tires.

The problem has worsened dramatically since 2009. Chinese tire producers expanded rapidly by taking advantage of the easy credit that was part of the government’s post-financial-crisis economic stimulus. By the time China’s economic growth rate slowed to about 7% this year, output was far outpacing demand.

According to the China Petroleum and Chemical Industry Federation, the more than 300 tire makers in China operate at 70% of capacity, far below the 85% that economists say is needed to generate profits. Chinese tire exports increased tenfold between 2000 and 2013.

Guangrao, a county in eastern China, is home to about 200 tire factories in an area dubbed Rubber Valley. For years, the valley’s skyline was dominated by construction cranes hoisting up new factories.

The Guangrao county government, which needs tire companies’ tax revenue, is trying to keep them in business. Doing so saves jobs in the short run. But it also puts off a consolidation that might make the survivors profitable.

Family-owned Shandong Yongsheng Rubber Group, where Mr. Liu is chief executive, is another local company that has struggled. It began making rubber tubes in 1986 and grew into one of China’s largest tire exporters. 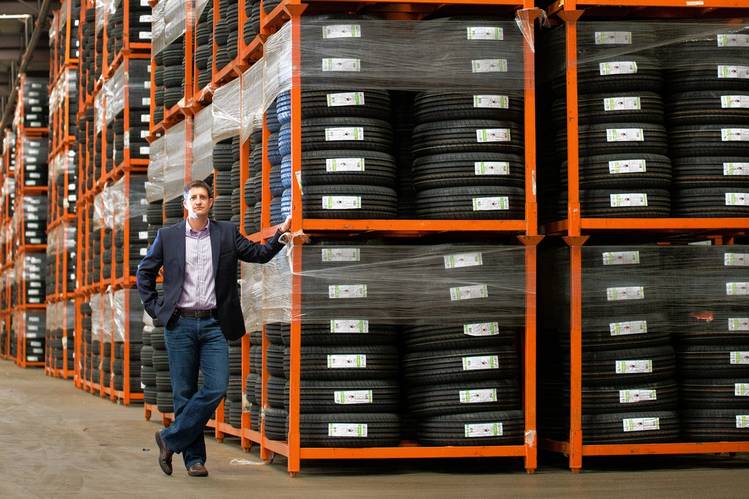 “I’ve been with the company for six months, and the prices of our products have already dropped four times,” Huang Jianning, a Yongsheng salesman, said in February. They now average about 200 yuan, or $32, per tire.

Mr. Liu has mothballed two factories to try to keep his business on track.

Rubber Valley’s problems have rippled out to other countries, including ones where planters produce the raw material for tires.

Rubber trees take about seven years to mature. Planters had to decide in 2007—when China’s gross domestic product expanded by 14.2%—how many trees to plant to meet demand in 2014.

When it was time to harvest, the Chinese economic growth rate had fallen by about half.

Kampanart Pornpromvinij, a Thai planter, bought 395 acres over the past decade for rubber-tree cultivation. He thought demand and prices would keep rising.

Now, more than 316 acres of his trees are maturing. But the price of the milky white sap, called latex, that is processed into rubber is down 60% from its high four years ago. Mr. Kampanart has continued shipping latex at a loss to Mr. Liu’s Yongsheng and other factories, so he can maintain relationships and gain at least some revenue.

In the U.S., the sliding prices are a boon to tire shoppers. Gene Endicott, a Memphis gas-station mechanic, said he used his tax refund in February to buy tires priced at $139 apiece for his Dodge Caravan.

“When I saw what tires were selling for, I jumped on it,” he said.

For some retailers and distributors, though, the deflation has meant losses, layoffs and trade fights.

At Del-Nat, prices fell so quickly they began to undermine the Memphis, Tenn., distributor’s business model.

Del-Nat had been buying a large share of its tires from Yongsheng, reselling them at a markup. When Yongsheng and other Chinese companies started cutting prices, Del-Nat was stuck with older, higher-priced inventory it couldn’t sell at a profit.

“Management had a hard time getting over the fact that prices were going down and to turn the product, they had to reprice it, even at a loss,” said Mr. Grant, a 33-year-old turnaround specialist recruited last year as Del-Nat chief executive. “Instead of minimizing losses, they sat and hoped for a rebound.”

Matters grew worse after low-price exports by Yongsheng and other Chinese tire makers caught the attention of the U.S. government last year, triggering a tariff action that led to even more setbacks for Del-Nat.

The Commerce Department was getting complaints from workers in U.S. tire factories, who argued that Chinese tire producers benefited from improper subsidies such as tax credits.

Commerce zeroed in on Yongsheng, peppering the company with questions. Relations between the Chinese company, which declined to answer Commerce’s queries, and U.S. investigators became so poisonous that Commerce labeled Yongsheng a “non-cooperating party.” The Chinese company “significantly impeded” its investigation, Commerce said in a document explaining a preliminary ruling in November.

In that preliminary action, the U.S. tagged Yongsheng with an 81.29% tariff. A final decision is expected this summer.

Mr. Liu said his company withdrew from the Commerce investigation because it couldn’t provide “in a very short period” all of the detailed information requested. He said it would ask the department to review its decision next year if it puts in place a stiff tariff, as expected by many in the U.S. tire industry.

Recognizing that its tires would probably become uncompetitive in the U.S. because of the tariff on them, Yongsheng stopped shipping orders to America. That left Del-Nat in Memphis without the main supplier for some of its best-selling brands. Losing money already, Del-Nat felt it didn’t have time to find alternative suppliers.

“We were done; we couldn’t rebound,” said Mr. Grant, its CEO.

He quickly sold the distributor’s inventory in January 2015 at what he calls a “distressed” price of $23 million, or about 85% of what Del-Nat had paid for it. Half of the company’s 52 employees have left or been laid off; the others are looking for jobs from the purchaser of the Del-Nat warehouse.

“A tremendous amount of capacity came on line [in China] before people realized it wasn’t sustainable,” Mr. Grant said. “By then, it was too late.”