A Farce Which Is Failing: First Hand Account Of The Ukrainian Government’s War on “Terrorists”

News media reporting of the situation in Ukraine has nearly vanished in the past couple of weeks. Here is an update from reader Jacob Dreizin, a US citizen who speaks Ukrainian and Russian.

Just wanted to give you an update on Ukraine. A lot has happened since I wrote you last.

The rebels in the eastern regions are clearing their hinterland of minor government positions, and securing their supply lines from Russia. The Russian government has started to allow volunteers and weapons to move across the border without interference from its side.

Whether intended or not, it is the classic insurgent battle plan. Once this stage is completed, the remaining government forces in Donetsk and Lugansk regions will be so isolated as to have no choice but to “temporarily redeploy and regroup”, that is, to retreat.

The rebels now have MANPADS, Man-Portable-Air-Defense-Systems as suggested by the below photo. 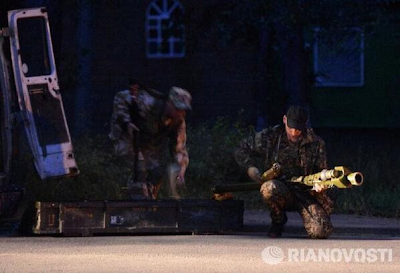 Keep in mind that the average Ukrainian soldier is being paid around $100 per month, which often arrives late.  Most of these people have no motivation to risk their lives in a prolonged war of subjugation and occupation in the eastern regions. So far, Kiev has been compensating for this with its better-paid special police detachments as well as with various yahoo militias funded by the oligarch Igor Kolomoisky, owner of Ukraine’s largest bank.

This cannot last. At some point, the body count will be such that a critical mass of the security forces will simply refuse to fight or even to be deployed in the war zones.  We are already starting to see this.  According to the Ministry of Interior, 13 west Ukrainian paramilitary police were fired today for refusing deployment to the eastern regions.  There was also a recent case where around 100 soldiers in one reserve unit refused call-up orders.

Moreover, it is well known that the military is poorly fed, subsisting on donations as well as shipments of American MREs (meals ready to eat). There is a lot of grumbling in the ranks, and at some point we are going to start seeing mutinies and mass desertions.

Eventually, the Ukrainian war effort will grind down and then collapse.  Meanwhile, the rebels grow stronger by roughly 100 men each day, on average. If Russia cuts off the gas in a few days, as threatened, this will be a huge blow, as it will degrade European support for Kiev.

Finally, please take a look at the video below of a pre-funeral memorial service for five rebel militiamen in a small city in the east. Pay special attention to the segment between 1:48 and 2:07. It looks to me like around two thousand people turned out for this event. So when you read that these rebels are “terrorists” and that theirs’ is not a popular movement, and that the recent independence vote was a total fraud, and that it is all the work of Russia, you know you are reading Western media bias.

If you want, I can start sending you photos of destroyed homes and dead civilians, just to show that it is happening, and the media here couldn’t care less.

Clearly Jacob’s point of view is completely different than that presented by Western media.

I really do not know. However, it certainly is possible even though some may even consider the his viewpoint to be nothing but pro-Russian propaganda.

Meanwhile, my own opinion has been the Eastern regions will not become part of Russia for the simple reason Russia does not want the associated problems.

Will the issue of natural gas supply bring the crisis to head sooner rather than later? We will find out shortly.