The grim news in Europe continues, this time led by Germany. Bloomberg reports German Factory Orders Slump Most Since 2009.

Orders, adjusted for seasonal swings and inflation, fell 5.7 percent in August, the Economy Ministry in Berlin said today. Economists predicted a 2.5 percent decline, according to the median estimate in a Bloomberg News survey. The data are volatile, and the drop followed a 4.9 percent increase in July that was the most in more than a year. Orders fell 1.3 percent from a year earlier.

While August orders were weak partly because of school holidays, they were also affected by the slowing euro-area economy and geopolitical risks, the ministry said.

Factory orders fell 5.7 per cent in August compared with the previous month, the biggest drop since January 2009 when demand slumped in the aftermath of the global financial crisis.

However, Germany’s economy ministry, which released the figures on Monday, played down their significance, saying the timing of school holidays had influenced the result.

Morgan Stanley cautioned clients against “reading too much into a single report” after factory orders rose by 4.9 per cent in July. 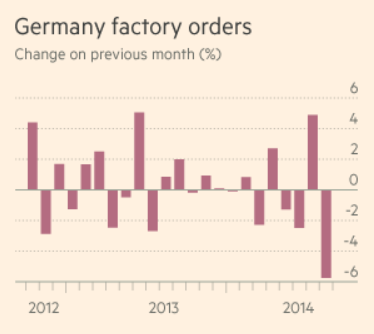 Smoothing Out the Volatility

To be fair, German factory orders are volatile. So let’s presume timing of school holidays is behind the July increase and the August decline. With that in mind, let’s take a simple average of the last two months.

The average result is a decline of 0.4% per month, for the last two months. That process also means four consecutive months of decline.

But what about export orders? Is that 8.4% decline entirely attributable to school holidays?

No matter how you slice it, the “don’t worry, be happy, it’s mostly a school-related holiday phenomena” viewpoint is more than a bit Pollyannaish.