Some 30,000 participants were wondering if the organizers of today’s 34th Beijing International Marathon would cancel the event after “a toxic fog enveloped the Chinese capital and smog levels soared to “hazardous” levels.” Adding to the confusion, and concerns, even the People’s Daily, the Communist Party’s mouthpiece newspaper, cautioned athletes against taking part in the 26.2-mile race, reporting that Beijing’s air was “not suitable for outdoor activities”.  As the Telegraph reports, “Beijing authorities admitted their city’s air was “severely polluted” on Sunday while the US embassy, which also monitors smog levels, described the situation as “hazardous”. The Marathon organizers’ answer, however, was that the Marathon would proceed as scheduled.

As a reminder, this is what the Beijing Air pollution tracker said 8 hours ago when the marathon was due to begin:

And to think China was so demonstratively eager to reform not only its massive debt overhang, but its air as well: “Li Keqiang, China’s prime minister, vowed to “declare war” on pollution in March but Beijing’s “airpocalypse” marathon capped a calamitous month for the city’s environmental authorities.”

Once the green light was given, most competitors chose to ignore the health warnings, instead donning facemasks they hoped would prevent toxic air invading their lungs as they gathered in Tiananmen Square ahead of the race’s 8am start.

“It was really exhausting,” said Ma Dong, a 22-year-old male runner who was among those to use a mask. “Lots of athletes pulled out halfway because of the haze. It was really uncomfortable wearing a mask during the marathon as you can’t breathe freely.”

Organisers told the Beijing News they handed out 140,000 water-soaked sponges to athletes, advising them to “clean” their skin after it was “exposed to the air”.

Luo Changping, a Chinese journalist, posted a photograph of one runner sporting a military-style gas mask. “I’m not running the marathon. I’m going back to the World War,” the journalist wrote.

Not all made it to the finish line across town near Beijing’s Bird’s Nest stadium. “Some of the runners have given up in the 2014 Beijing Marathon due to serious air pollution,” the People’s Daily reported.

Ying Wei, a 23-year-old runner, admitted his “lung hurt quite badly during and after the race”.

Just give it a few more weeks: we are confident the pain will simply go away.

In any event, the end result was a surreal photo album of the “airpocalypse” marathon, perhaps the best harbinger of the globalized future, as of thousands of people jogged across downtown Beijing in gasmasks. 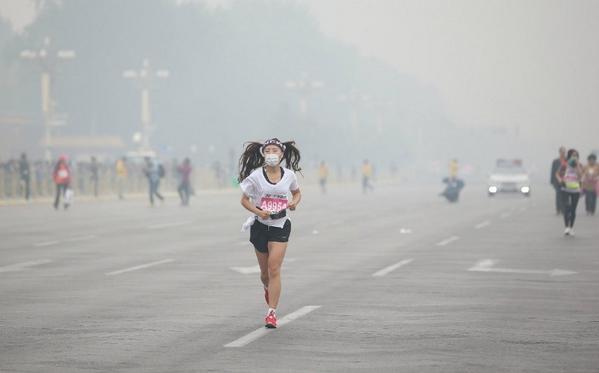 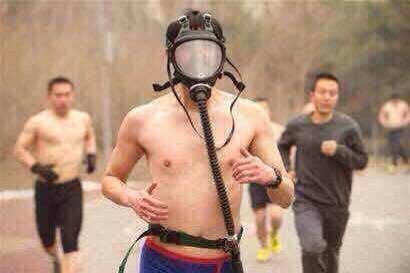 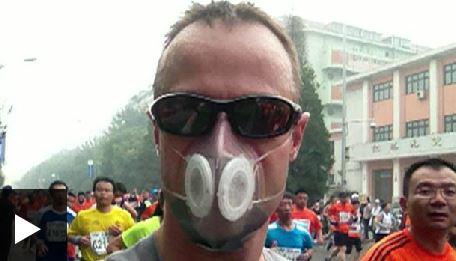 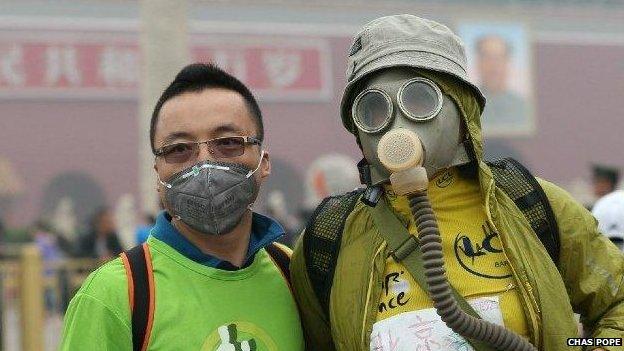 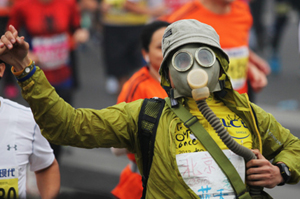 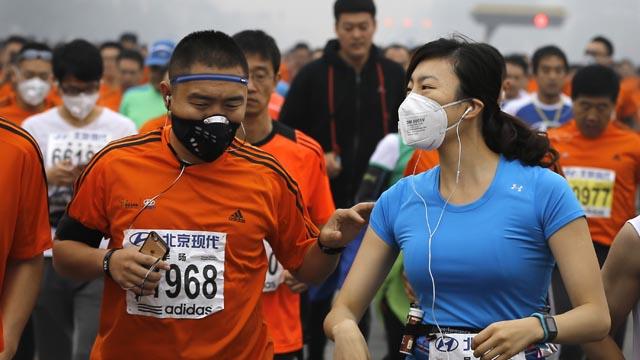 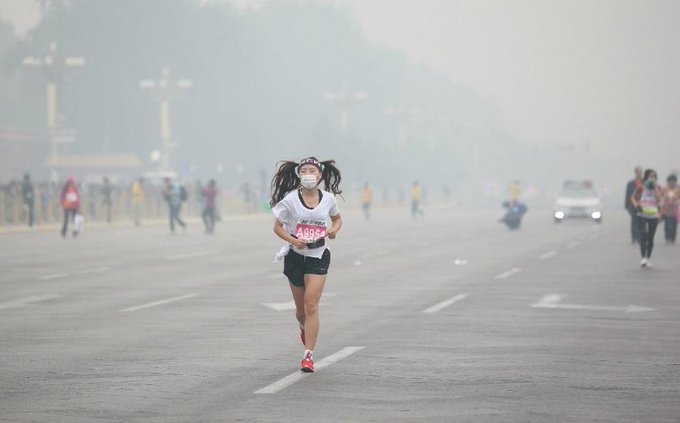