All Quiet on The Treasury Front Bodes Ill

There was little new or surprising at the Treasury auctions in March. The big wad of cash that Barack Obama had left behind for Don Trump is now gone. The Don spent all of it by early March. He paid down outstanding debt with most of it. That goosed the stock market. And where he had the discretionary spending ability, he spent as much as he could to goose the economy.

The money he spent paying down debt went back to the dealers, banks, and investors who held the maturing debt. They used the cash to buy stocks and bonds. That drove the blowoff in stock prices and stabilized a weakening bond market.

The Treasury has continued to borrow despite the debt ceiling. I haven’t gotten into the minutia of how it is managing to do that, but they are keeping total debt below the ceiling established at the March 16 level. Meanwhile they are raiding other government funds like government employee pensions. That’s not a bottomless pit.

The Treasury has about $100 billion in cash on hand, thanks to strong tax collections in March. That’s a typical level for this time of year. It’s enough to fund a couple of months of deficit spending.

Then it gets its big annual windfall in April. That could carry government spending for another couple of months. Some people say it will run out of cash in May. Others say June. If the tax haul is strong, maybe they can last until July. But they’ll need to stop net borrowing before that, because they are already up against the ceiling.

The last time this happened in 2015 the market did exactly the opposite of what The Street and all the genius mainstream media pundits expected. It rallied. Which is what we expected. We knew that removing the biggest source of supply of investment paper to the market creates shortage.

The financial system at that point was still awash in cash with more coming weekly. The ECB and BoJ were printing money hand over fist. The banks and dealers who got the cash sent some of it to the US markets. US bank deposits grew rapidly. Dealers and institutions flush with cash had to put the money somewhere. They bought existing paper. That drove stock and bond prices higher and interest rates lower.

Then it sold off sharply as soon as the Treasury returned to the market. It hit the market for a couple hundred billion over a couple of months as it rushed to repay the accounts it had previously raided.  Stock and bond prices fell sharply. Again, supply and demand. But it didn’t last because the excess of supply was only temporary. Treasury borrowing quickly retraced to normal levels.

The question we have this time is this. We know that supply will be reduced for the duration of the debt ceiling impasse. But we don’t know for sure this time that the government won’t shut down, or that money won’t be rationed to pay some bills and not others.

Market confidence is likely to prove far more fragile now than it was in 2015. Europeans may be far less willing to send some of the cash they are getting from the ECB is printing to the US for income and safekeeping as they’ve done in the past. If secular trend of demand for Treasuries continues to fall, then we won’t see the rally we saw during the last debt ceiling impasse. We’ll need to watch for any signs of this in the demand indicators, which I will cover in the demand side report coming up this week.

Once there’s a new debt ceiling in place, the Treasury will need to immediately repay the internal accounts they raided to keep the government going. That will necessitate hundreds of billions in new borrowing over no more than a couple of months. A huge supply bulge will be coming. The pressure from all that supply will send prices careening lower. The timeline is uncertain, but late summer is a good guess.

This time the dip buyers could prove far more timid than they have been in the past. It will be even more important to watch the demand indicators closely for any signs of this. There have been hints of this in recent weeks. The bond market has made repeated probes toward a breakout in yields. That doesn’t bode well for the future. We should interpret the technical indicators on the charts of the stock market averages with an eye toward that context. 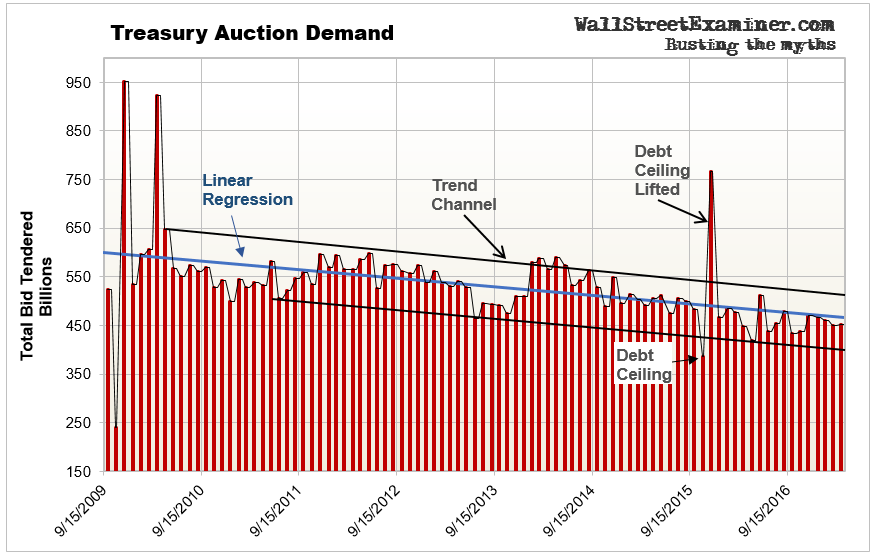 The TBAC forecast calls for $23 billion in paydowns of notes and bonds this month. That’s less than usual for April. The Treasury may want to hold on to some cash as it copes with the debt ceiling, instead of using its cash to pay down outstanding debt. It has managed to continue to borrow by finagling other accounts which it controls, but push will soon come to shove and the Treasury will be forced to stop new borrowing. That could happen within weeks.

A government shutdown with a moratorium on debt issuance may once again not play out the way most observers think. That is, with an immediate crash. With the Treasury up against the debt ceiling, there will be no new Treasury supply on the market. That could give the markets a boost, as money will need to go somewhere. That’s what happened in 2015. With reduced Treasury supply, prices rose in all types of financial assets.

But this time greater uncertainty will hang over the Federal Government’s financial condition. Then the question will be where dealers, banks, and investors will deploy their cash flows (gold?). Will they still be willing to buy existing bonds and stocks, pushing their prices up? Or will they demur this time.

We probably can expect a stock market selloff to begin in earnest once a deal is done to raise the debt limit. The Treasury will rush back into the market to raise a few hundred billion in cash to repay the government pension funds and other accounts it previously raided during the impasse.

When that happened in 2015, the stock and bond markets sold off sharply, but it was only temporary. This time we may not be so lucky.

Lee first reported in 2002 that Fed actions were driving US stock prices. In recent years the US Treasury has also played an increased role in directly moving markets. Lee has tracked and reported on those relationships for his subscribers for the last 15 years, helping to identify major turning points in the markets in their earliest stages. Try Lee’s groundbreaking reports on the Fed and the monetary forces that drive market trends for 3 months risk free, with a full money back guarantee. Be in the know. Subscribe now, risk free!