In mid-September, when we looked at the Australian housing market, we said that in the aftermath of Beijing’s crack down on capital controls following its August currency devaluation, that “new Chinese ‘regulations’ may just kill Australia’s golden goose of ‘weath creation’ as Aussie’s largest trade partner sees its economy collapse.” More:

While the Aussies themselves proclaimed a “war on cash,” it appears, as AFR reports, that Chinese purchases of Australian property have dropped significantly in the past month, according to agents, as buyers struggle to shift money out of the country following Beijing’s move to tighten capital controls. With Chinese banks now limiting any overseas transfer to USD50,000 – in an effort to control capital outflows – and with China dominating the Aussie housing market, one agent exclaimed, “it has affected 70 to 80 per cent of current transactions and some have already been suspended.”

The results were immediate: “the tighter rules in China come as Sydney recorded its lowest auction clearance rate for the year this past weekend, while Melbourne has now recorded two weekends below the same time last year, according to Corelogic RP Data.”

Two months later, the sudden withdrawal of Chinese hot and laundered money has just popped another housing bubble: perhaps the biggest one of all. London.

Citing Richard Barber, a director at broker W.A. Ellis LLP, a unit of Jones Lang LaSalle Inc., Bloomberg reports that prices of homes valued at 5 million pounds ($7.6 million) or more fell 11.5% on a per square foot basis from the third quarter of 2014. Bloomberg is eager to assign the plunge on “the government’s stamp duty sales tax”, however that has been around for a while and only after the Chinese devaluation was there such a sudden drop in prices.

What changed? Why China’s far more aggressive crackdown on the exporting of hot money, of course. Just like in Australia.

The result has been sharp and acute: sales volumes across all homes in the best parts of central London dropped 14%, the realtor said on Thursday.

“The bubble may already have burst” for the most expensive homes, Barber said. Now, “36 percent of all properties currently on the market across prime central London are being marketed at a lower price than they were originally listed at, with the average reduction in price being 8.5 percent.” 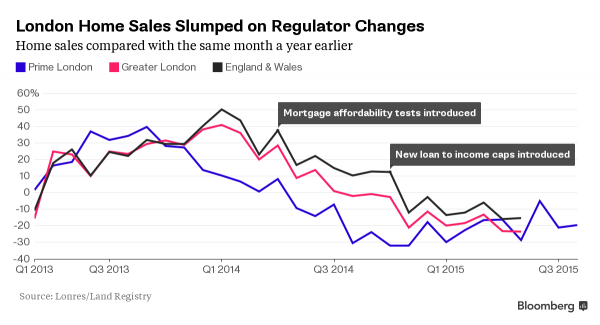 According to the W.A. Ellis report, values across all homes in London’s best central districts rose 1.4 percent during the third quarter to 1,832 pounds a square foot, which means that the one segment most impacted was the one which also happens to be most desirable to offshore (read Chinese “all cash”) clients.

Neither the London housing bubble nor its sudden pop should come as a surprise to central bankers, either in the UK or in China. After all it is their easy money policies, and the creation of tens of trillions in excess deposits in banks via the reserve pathway (deposits which had to be parked in “safe” jurisdictions such as Swiss bank accounts until recently or in London/NY/SF/Vancouver real estate, that caused this.

Sadly, and as usual feigning ignorance for the consequences of their actions, instead of finally admitting they are at fault, these same central bankers decided to take the easy way out and simply blame the market itself.

Case in point BOE chief economist Andrew Haldane, who said on Thursday that the British housing market is “broken.”

According to him, Britain needed to build around 200,000 new homes a year, and that its failure to build much more than half that, largely due to a lack of new public housing, had caused prices to rocket. “The UK housing market is broken,” he said at a meeting hosted by Britain’s Trades Union Congress. “There is a chronic and accumulated imbalance between demand and supply, and it is that which is sending skyward – and has sent skyward – house prices.”

So a “broken market” leading to skyward prices due to lack of public housing (read even more debt creation and misallocation) – not a single word about price indescriminate foreign buyers benefitting from years of ZIRP and China’s 300 debt/GDP, not a single word about why private-sector builders are not building houses in the first place (after all if the demand was there, the private sector would have supplied the good).

Sure – it’s easier to blame the market for being broken – and always in the passive voice – than taking responsibility for being the one whose policies broke it.

And now, with the luxury bubbles in Australia and London popped and soon to be in tatters, we sit back and wait to see how long before it crosses the Atlantic, and such real abominations of the second housing bubble as Million Dollar Listing, can finally meet the fate of Wall Street Warriors.