Another Deformation Of ZIRP—-Returns Chasing Pension Funds Plunging Into Risk

By Timothy W. Martin at the Wall Street Journal

What it means to be a successful investor in 2016 can be summed up in four words: bigger gambles, lower returns.

Thanks to rock-bottom interest rates in the U.S., negative rates in other parts of the world, and lackluster growth, investors are becoming increasingly creative—and embracing increasing risk—to bolster their performances.

To even come close these days to what is considered a reasonably strong return of 7.5%, pension funds and other large endowments are reaching ever further into riskier investments: adding big dollops of global stocks, real estate and private-equity investments to the once-standard investment of high-grade bonds. Two decades ago, it was possible to make that kind of return just by buying and holding investment-grade bonds, according to new research.

In 1995, a portfolio made up wholly of bonds would return 7.5% a year with a likelihood that returns could vary by about 6%, according to research by Callan Associates Inc., which advises large investors. To make a 7.5% return in 2015, Callan found, investors needed to spread money across risky assets, shrinking bonds to just 12% of the portfolio. Private equity and stocks needed to take up some three-quarters of the entire investment pool. But with the added risk, returns could vary by more than 17%.

Nominal returns were used for the projections, but substituting in assumptions about real returns, adjusted for inflation, would have produced similar findings, said Jay Kloepfer, Callan’s head of capital markets research.

“Stocks are just ownership, and they can go to zero. Private equity can also go to zero,” said Mr. Kloepfer, noting bonds will almost always pay back what was borrowed, plus a coupon. “The perverse result is you need more of that to get the extra oomph.” 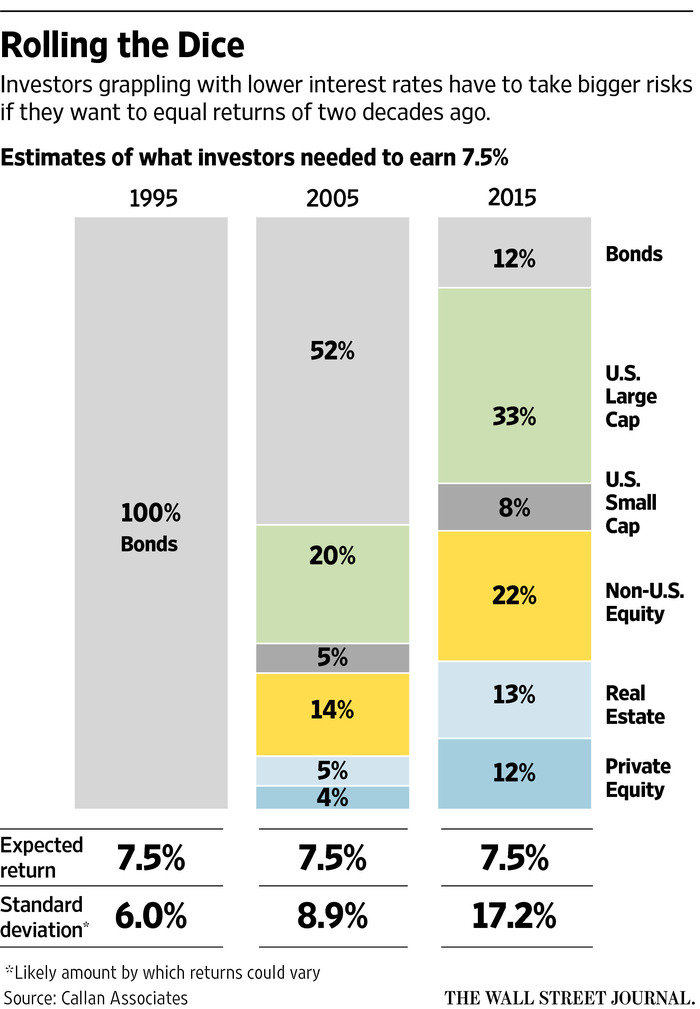 Bonds historically produced a source of safe, good-enough streams of profit that allowed long-term, risk-averse investors to hit annual targets. The era of low rates has all but erased that buffer. The absence of a few extra percentage points of yield means investors must now compensate by embracing unsafe bets that could strike big—or flop. The Callan report highlights how risky an endeavor that is.

“Not nearly enough attention has been paid to the toll these low rates—and now negative rates—are taking on the ability of investors to save and plan for the future,” BlackRock Inc. Chief Executive Officer Laurence Fink said in a recent letter to shareholders.

Some investors such as David Villa of the $100 billion State of Wisconsin Investment Board argue that at near zero, rates are artificially suppressed, and it’s creating bubbles in asset prices.

“We know the Federal Reserve is trying to trick us—we’re dealing with distortions,” said Mr. Villa, referring to how low rates have historically encouraged investors to take on more risk. “They want us to invest in building new things, but what [investors are] doing is trading existing assets at higher and higher prices.”

Many large investors aren’t gambling that big—and their returns are lagging well behind internal targets. The nation’s largest public pension fund, the California Public Employees’ Retirement System, has one-fifth of its assets in bonds and is down 1.3% since July 1, according to public documents. The system, known by its abbreviation Calpers, also has 53.1% of its assets in stocks, 9% in real estate and 9.4% in private equity. In 2015, Calpers posted a return of 2.4%, below its target rate of 7.5%.

The risk dilemma for investors has real-life consequences. Retirement plans, including Calpers and the New York State Common Retirement Fund, are lowering what they predict they can earn on their investments, a move that means workers and cities likely face higher contributions and taxes. For insurers, lower bond returns mean life-insurance policyholders pay more for coverage.

It wasn’t always this complex. Two decades ago big investors had their money sitting primarily in U.S. stocks and bonds. Inflation was 4% and yields on investment-grade bonds roared upward at double that rate.

After the 2008 financial crisis, central bankers pushed down rates to stimulate growth, dropping real returns close to zero for higher-quality debt. Government bonds in Japan and Europe now have nominal yields below zero.

Cheaper borrowing costs generally spur new investments from companies or consumers. But instead, global production is flat or declining, and consumers face stagnant wages that crimp their ability to spend.

That has pushed down the “neutral rate,” or the real rate of interest that neither accelerates nor decelerates the economy. It is now basically flat, compared with 4% or 5% in prior decades, said Roberto Perli, a partner at Cornerstone Macro, a macroeconomic research firm.

While some investors are loading up on traditionally risky assets as a way of hitting ambitious targets, others—concerned about a slowing global economy—are wrestling with how to reduce risk without piling into bonds.

The nation’s second-largest public pension plan, the California State Teachers’ Retirement System, has shifted a significant amount of money away from some stocks and bonds to protect against a downturn. It moved assets into U.S. Treasurys and so-called liquid-alternative funds, which mimic hedge-fund strategies. Calstrs, as the pension is called, reported gains of 1.5% during a choppy 2015, with returns on its fixed-income investments up just 0.6%.

“We used to say bonds would be that risk protection,” said Christopher Ailman, chief investment officer at Calstrs. “Now we can’t.”

Others are willing to accept lower returns for now and wait for better days ahead. The Wisconsin pension sold off trophy real-estate and private-equity holdings when it believed prices were high over the past two years and switched into publicly traded stocks and bonds that can be sold quickly, Mr. Villa said.

Not all investors have the luxury of avoiding bonds. New York Life Insurance Co., which has about 89% of its $220 billion in assets in bonds and other fixed-income securities, once could find what it needed among well-known, plain-vanilla securities. Insurers typically have large holdings of high-quality government and corporate bonds, because of state-regulatory guidelines encouraging safe investments.

But now the insurer has to scour the globe for suitable bets in assets in which it had never before dabbled—such as complex bond deals involving railcar leases, shipping containers and legal-settlement payouts.

Source: Pension Funds Pile on Risk Just to Get a Reasonable Return – The Wall Street Journal