Another Unicorn Hits The Wall—-Why Theranos Is Bleeding Bad News

It seems billion dollar baby of Silcon Valley, Elizabeth Holmes, is facing yet another unicorn-slaying moment as the fairy-take ending for Stanford drop-out looks increasingly distant after a WSJ report that U.S. health inspectors have found serious deficiencies at Theranos Inc.’s laboratory in Northern California, according to people familiar with the matter. With a board full of big swinging dicks about to be exposed for the greater fools they truly are, failing to fix the problems could put the Theranos lab at risk of suspension from the Medicare program.

We reported on the beginning of the end of the multi-billion dollar dream here, when its core “new technology” – known as a Capillary Tube Nanocontainer (CTN) – was exposed as essentially unacceptable for use.

And now, as The Wall Street Journal reports, U.S. health inspectors have found serious deficiencies at Theranos Inc.’s laboratory in Northern California, according to people familiar with the matter.

The problems were found during an inspection by the Centers for Medicare and Medicaid Services, the chief federal regulator of clinical labs, at the blood-testing company’s facility in Newark, Calif. Failing to fix the problems could put the Theranos lab at risk of suspension from the Medicare program.
The inspection results are expected to be publicly released soon, these people said. A spokesman for the agency said it “can’t confirm any survey conclusions or results at this time.”

Theranos spokeswoman Brooke Buchanan said the company “does not have the report from last year’s regularly scheduled CMS audit of its California lab.”

The problems observed by regulators were far more severe than those cited by CMS following its last inspection of the same lab in December 2013, according to the people familiar with the matter. The previous inspection cited infractions that Theranos said it promptly resolved.

The drugstore operator has 41 blood-drawing “wellness centers” in stores in Arizona and California, which are Theranos’s primary access to consumers. Walgreens had aimed to expand the sites nationwide but has suspended those plans until Theranos answers questions about its technology, said the people familiar with the matter.

In recent weeks, Walgreens has debated whether to close the wellness centers, and the results of the latest inspection by CMS could lead the retailer to take an even harder look at what remains of its partnership with Theranos, these people said.

Since October, Walgreens representatives have met a number of times with Theranos Chief Executive Elizabeth Holmes and her executive team but were dissatisfied with their responses, the people added.

An earlier review of the contract led Walgreens officials to conclude that itwould be difficult to exit the agreement, but the inspection findings could alter that conclusion, according to people familiar with the matter.

Finally, as Aswath Damodaran chastened just a few months ago, looking back at the build up and the let down on the Theranos story, the recurring question that comes up is how the smart people that funded, promoted and wrote about this company never stopped and looked beyond the claim of “30 tests from one drop of blood” that seemed to be the mantra for the company. While we may never know the answer to the question, Aswath Damodaran offers three possible reasons that should operate as red flags on future young company narratives…

1. The Runaway Story: If Aaron Sorkin were writing a movie about a young start up, it would be almost impossible for him to come up with one as gripping as the Theranos story: a nineteen-year old woman (that already makes it different from the typical start up founder), drops out of Stanford (the new Harvard) and disrupts a business that makes us go through a health ritual that we all dislike. Who amongst us has not sat for hours at a lab for a blood test, subjected ourselves to multiple syringe shots as the technician draw large vials of blood, waited for days to get the test back and then blanched at the bill for $1,500 for the tests? To add to its allure, the story had a missionary component to it, of a product that would change health care around the world by bringing cheap and speedy blood testing to the vast multitudes that cannot afford the status quo.

The mix of exuberance, passion and missionary zeal that animated the company comes through in this interview that Ms. Holmes gave Wired magazine before the dam broke a few weeks ago. As you read the interview, you can perhaps see why there was so little questioning and skepticism along the way. With a story this good and a heroine this likeable, would you want to be the Grinch raising mundane questions about whether the product actually works?

2. The Black Turtleneck: I must confess that the one aspect of this story that has always bothered me (and I am probably being petty) is the black turtleneck that has become Ms. Holmes’s uniform. She has boasted of having dozens of black turtlenecks in her closet and while there is mention that her original model for the outfit was Sharon Stone, and that Ms. Holmes does this because it saves her time, she has never tamped down the predictable comparisons that people made to Steve Jobs.

If a central ingredient of a credible narrative is authenticity, and I think it is, trying to dress like someone else (Steve Jobs, Warren Buffett or the Dalai Lama) undercuts that quality.

3. Governance matters (even at private businesses): I have always beensurprised by the absence of attention paid to corporate governance at young, start ups and private businesses, but I have attributed that to two factors. One is that these businesses are often run by their founders, who have their wealth (both financial and human capital) vested in these businesses, and are therefore as less likely to act like “managers” do in publicly traded companies where there is separation of ownership and management. The other is that the venture capitalists who invest in these firms often have a much more direct role to play in how they are run, and thus should be able to protect themselves. Theranos illustrates the limitations of these built in governance mechanisms, with a board of directors in August 2015 had twelve members: 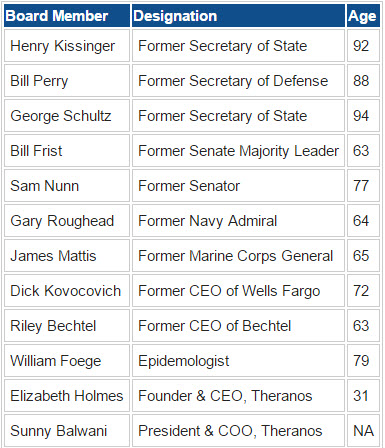 I apologize if I am hurting anyone’s feelings, but my first reaction as I was reading through the list was “Really? He is still alive?”, followed by the suspicion that Theranos was in the process of developing a biological weapon of some sort. This is a board that may have made sense (twenty years ago) for a defense contractor, but not for a company whose primary task is working through the FDA approval process and getting customers in the health care business. (Theranos does some work for the US Military, though like almost everything else about the company, the work is so secret that no one seems to know what it involves.)
The only two outside members that may have had the remotest link to the health care business were Bill Frist, a doctor and lead stockholder in Hospital Corporation of America, and William Foege, worthy for honor because of his role in eradicating small pox. My cynical reaction is that if you were Ms. Holmes and wanted to create a board of directors that had little idea what you were doing as a business and had no interest in asking, you could not have done much better than this group of septuagenarians.