By CIARA LINNANE at Marketwatch

Yet another measure of risk in the U.S. junk-bond market is flashing an alarming signal.

Moody’s Investors Service said its Covenant Quality Index deteriorated to its worst level on record in August from July, blowing past the previous record low set in November 2014.

The index measures the degree of protection afforded to holders of junk, or high-yield, bonds sold by North American issuers. Covenants are provisions that aim to protect the credit quality of an issuer over time as a way to safeguard the bondholder’s investment. For the issuer, they are the strings attached to a deal that regulate its behavior and prevent it from further increasing its risk profile.
The Moody’s index uses a three-month rolling average covenant quality score that is weighted by each month’s total bond issuance. The scale runs from 1.0 to 5.0, where a lower score is a sign of stronger covenant quality, and a higher score is the opposite.

“Single-month record weak scores in June and July drove the CQI to 4.53 in August for its worst score to date,” Moody’s analysts wrote in a report.

See also: Stress in the junk-bond market climbs to highest level in 5 years

Single-month covenant quality actually improved in August from July, although volume was low with just 17 deals hitting the market. Of that total, 29% had ‘covenant-lite’ packages, meaning fewer protections, down from 56% in July and close to June’s reading of 31%. The historical average is 22%.

The weakest high-yield package was from Kronos Acquisition Holdings Inc., a holding company for a group that makes soap and detergents. Kronos issued $390 million of 9.00% senior notes due 2023. The notes had a covenant quality score of 4.63, according to Moody’s. The issuer is rated at Caa2, or eight notches below investment grade.

The second-weakest package came from Party City Holdings Inc. PRTY, -0.56% which sold $350 million of 5.125% senior notes due 2023. The notes had a covenant quality score of 4.54. The issuer is rated at B3, or three notches below investment grade. 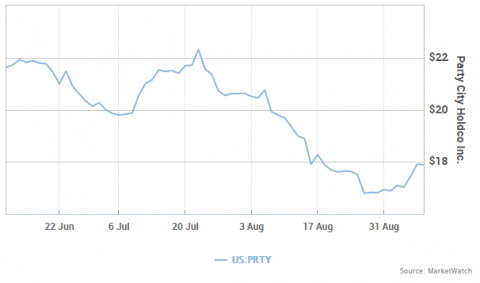 The strongest score went to First Data Corp., a private-equity owned payment technology company, which sold $1.21 billion of 5.375% senior secured notes due 2012. The notes garnered a covenant quality score of 3.57, said Moody’s. The issuer is rated at B1, or one notch below investment grade.

Source: Yet another measure of risk in junk-bond market flashing red – MarketWatch