Margrethe Vestager, the EU competition chief, exercises powers that would not be tolerated in a democracy

Europe’s Competition Directorate commands the shock troops of the EU power structure. Ensconced in its fortress at Place Madou, it can dispatch swat teams on corporate dawn raids across Europe without a search warrant.

It operates outside the normal judicial control that we take for granted in a developed democracy. The US Justice Department could never dream of acting in such a fashion.

Known as ‘DG Comp’, it acts as judge, jury, and executioner, and can in effect impose fines large enough to constitute criminal sanctions, but without the due process protection of criminal law. It misused evidence so badly in pursuit of the US chipmaker Intel that the company alleged a violation of human rights.

Apple is just the latest of the great US digital companies to face this Star Chamber. It has vowed to appeal the monster €13bn fine handed down from Brussels this week for violation of EU state aid rules, but the only recourse is the European Court of Justice. This is usually a forlorn ritual. The ECJ is a political body, the enforcer of the EU’s teleological doctrines. It ratifies executive power.

We can mostly agree that Apple, Google, Starbucks, and others have gamed the international system, finding legal loopholes to whittle down their tax liabilities and enrich shareholders at the expense of society. It is such moral conduct that has driven wealth inequality to alarming levels, and provoked a potent backlash against globalisation.

But the ‘Double Irish’ or the ‘Dutch Sandwich’ and other such tax avoidance schemes are being phased out systematically by the G20 and by a series of tightening rules from the Organisation for Economic Co-operation and Development (OECD). The global machinery of “profit shifting” will face a new regime by 2018.

We can agree too that Apple’s cosy EU arrangements should never have been permitted. It paid the standard 12.5pc corporate tax on its Irish earnings – and is the country biggest taxpayers – but the Commission alleges that its effective rate of tax on broader earnings in 2014 was 0.005pc, achieved by shuffling profits into a special ‘stateless company’ with its headquarters in Ireland.

“The profits did not have any factual or economic justification. The “head office” had no employees, no premises and no real activities,” said Margrethe Vestager, the EU competition chief.

This may be true but that does not empower the Commission to act arbitrarily, retroactively, and beyond the rule of law. What is really going on – as often in EU affairs – is a complex political attack on multiple fronts. It is a reminder of why Britain must remove itself entirely and forever from the clutches of this Caesaropapist construction.

Apple’s chief executive, Tim Cook, has a €13bn axe to grind, but he is almost certainly right in arguing that Mrs Vestager is making up state aid rules as she goes along, and has yet to produce evidence that Dublin granted Apple a sweetheart deal on taxes. “This claim has no basis in fact or in law,” he said.

“The Commission’s move is unprecedented and it has serious, wide-reaching implications. It is effectively proposing to replace Irish tax laws. This would strike a devastating blow to the sovereignty of EU member states over their own tax matters, and to the principle of certainty of law in Europe,” he said.

Ireland is now in the odd position of being told that it must claw back €13bn of back taxes from Apple even though it categorically rejects the legal arguments of Mrs Vestager.

“They’re overreaching their competence. The European treaties say the individual states are responsible for taxation policy. This is an approach through the back door to try and influence tax policy through competition law,” said Ireland’s finance minister, Michael Noonan.

The EU authorities are trying to subvert the sovereign prerogative of the elected Dail to determine Irish tax and fiscal policies, and some are clearly hoping to shut down Ireland’s special low tax model and end its role as an off-shore aircraft carrier for US companies.

“We have to see this for what it is – a highly politically-motivated targeting of a small member state along with a clear bias against US multinationals,” said Fine Gael MP, Michael Hayes.

Washington is outraged. The US Treasury Jacob Lew warned Brussels earlier this year that it was seeking “to impose penalties retroactively based on a new and expansive interpretation of state aid rules,” and that it appeared to be “targeting US companies disproportionately”.

Last week the US Treasury accused Mrs Vestager of “chilling” Transatlantic ties in a blistering report on the EU’s campaign of state aid probes. It said Brussels was deviating from established case law and had “collapsed the concepts of ‘advantage’ and ‘selectivity’. The report came within a whisker of alleging outright chicanery, deception, and lies.

Needless to say, there is Treasury money at stake. American companies are allowed to deduct their payments to foreign tax authorities, so such fines cut US tax revenue dollar for dollar. “That outcome is deeply troubling, as it would effectively constitute a transfer of revenue to the EU from the US government and its taxpayers,” said the report.

Washington has invited the problem by failing to reform the US corporate tax system. The US rate is badly out of line with the rest of the world at 35pc – and higher under some effective rates – and this is compounded by the effects of its world-wide tax code.

“American companies feel squeezed by the new rules coming and that is why they do these complex tax deals in Europe. If the US tax rate came down to the low 20s, they wouldn’t bother any more,” said one official.

“Obama didn’t grapple with this issue because it is a can of worms, but it is a can that has to be opened,” he said. 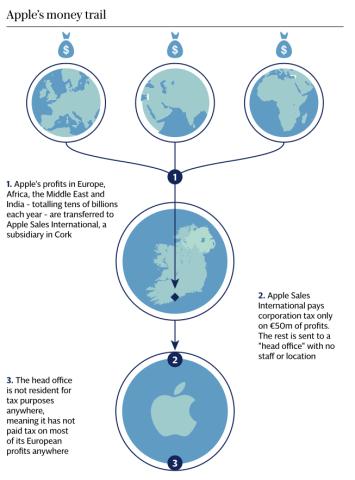 Behind the shadow boxing is a strong suspicion that powerful forces in the EU are trying to use state aid probes to break the global dominance of America’s technology giants, vainly hoping to nurture its own ‘Silicon Valley’ behind a digital wall. Amazon, Facebook, Google, as well as Apple, are all under fire, and Microsoft has fought an epic battle.

The view in Washington is that Mrs Vestager’s probe of the Russian gas giant Gazprom is being conducted with kid gloves, and that she is strangely accommodating over the Nord Stream pipeline so favoured by Germany. It is almost as if some in Brussels view America as the real enemy.

The US has in the past played down the episodic outbursts of anti-Americanism, but patience is wearing thin and the strategic calculus is shifting. Donald Trump has already warned that he is willing to “walk away” from NATO altogether.

Others question ever more loudly exactly why the US should continue to guarantee the EU’s eastern border against Vladimir Putin’s Russia if Brussels is behaving in such an unfriendly fashion – and without the American security blanket a disarmed Europe is almost completely defenceless.  The EU needs to watch its step.

Source: Apple travesty is a reminder why Britain must leave the lawless EU