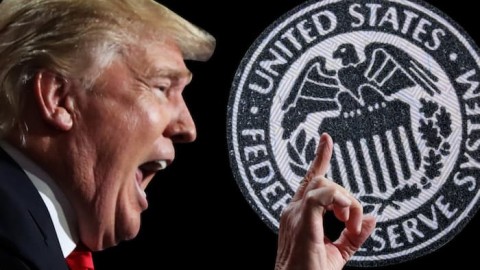 After a fusillade of excoriating and in many ways unprecedented attacks on the Federal Reserve by the Republican presidential candidate, Janet Yellen, the US central bank’s chair, finally hit back.

Ms Yellen last Wednesday dismissed as emphatically wrong Donald Trump’s claims that she and her institution were keeping short-term interest rates low at the behest of the Obama administration. “Partisan politics play no role in our decisions,” she declared.

Mr Trump is throwing punches at a time when the US central bank is under assault from both sides of the partisan divide, and at a time when polling suggests public confidence in its leadership has declined during a subpar economic recovery.

Some experts say the Fed is vulnerable and that the populist attacks could fuel demands by politicians for tighter constraints on its policy freedoms. Mr Trump “is tossing a lot of fuel on the fire”, says Sarah Binder, a professor of political science at George Washington University. “It intensifies the partisan criticism of the Fed and keeps the Fed in the politicians’ crosshairs.”

Mr Trump’s interventions by no means mark the first time the Fed has been turned into a political punching bag. Previous Fed chairs have been the subject of barbs during presidential campaigns — including in 2011 when Republican candidate Rick Perry accused former Fed chair Ben Bernanke of “treasonous” behaviour by conducting quantitative easing. Past administrations have seen outbreaks of tension with Fed chiefs, including under presidents George HW Bush and Richard Nixon.

Mr Trump has, however, set a new standard for anti-Fed invective — at least when it comes to presidential nominees. The latest salvo came in the presidential debate with Hillary Clinton on Monday night, when he claimed the US was in a “big fat ugly bubble” and that Ms Yellen was keeping rates low to help President Barack Obama. “The Fed is being more political than secretary Clinton,” he said.

Mr Trump has also said he would not reappoint Ms Yellen if he became president — even though the last three Fed chairs have all had their tenures renewed by a president from the opposite party that first appointed them.

Don Kohn, a former Fed vice-chairman who is now at the Brookings think-tank, says it is nothing new to see the Fed being hit by politicians and that discussion of Fed policy is desirable in a democracy. Mr Trump’s words would not influence Fed decisions “at all”, he says.

But he adds: “These attacks are worrisome to this extent: you do see polls suggesting the public’s respect for the Fed has fallen substantially relative to the pre-crisis period. These kinds of attacks, which accuse the Fed of acting on political motives rather than pursuing economic objectives, do not help the Fed gain the confidence of the public.”

Ted Truman, a fellow at the Peterson Institute for International Economics who also previously served at the Fed, says Mr Trump’s words could fuel demands by those who want to reform the central bank in a number of dimensions, including politicians who want it to set monetary policy according to stricter rules.

Tirades from Mr Trump and Republican lawmakers could also make it more difficult for the central bank to obtain political support for the use of new tools to fight future downturns — for example increases to the central bank’s inflation target or the use of negative interest rates, says Ms Binder. “It will be a very uphill battle.”

On the Democratic side, politicians have been complaining the Fed has an insufficiently diverse leadership and that the reserve bank system gives too much influence to commercial banks, as well as demanding it refrain from tightening monetary policy. Elizabeth Warren, the progressive Democratic senator from Massachusetts, formed an unlikely alliance with David Vitter, a Louisiana Republican, to rein in the central bank’s emergency lending powers.

“Populists both left and right are ganging up on the Fed, even if their concerns are different,” Ms Binder says.

The rise of populists such as Mr Trump has come at a time when trust in institutions and experts has been ebbing among some sections of the public. This will only make life more difficult for technocratic and somewhat mysterious institutions such as the Fed.

“The Fed recognised after the crisis it needed to go out and explain itself to a broader audience,” Mr Kohn says. “The populace now seems to be more divided and polarised, and the recovery has been slower than many wanted. Maybe these efforts need to be redoubled.”

Mark Carney, Bank of England governor, has been defiant in the face of criticism from pro-Brexit politicians, who took issue with his involvement in the debate about the UK’s membership of the EU.

Jacob Rees-Mogg, a Conservative member of the UK parliament’s Treasury committee and one of Mr Carney’s most vocal political critics, described his behaviour as “beneath the dignity” of the bank when he issued a warning that voting to leave the EU could result in a “technical recession”. But Mr Carney dismissed allegations that the bank had been politically partisan as “entirely unfounded”.

Since the UK voted on June 23 to leave the bloc, the economy has performed better than many economists had feared. But Mr Carney has continued to robustly defend his earlier warnings. Giving evidence to a group of senior politicians earlier this month, he said he was “absolutely serene” about the judgments he made and claimed some credit for stabilising the economy, saying the BoE’s decisive actions after the vote had reduced the risk of a recession. Gemma Tetlow, London

ECB chief squares up to Germans over ‘whatever it takes’ strategy

Mario Draghi can expect a tough crowd when he travels to Berlin this week to explain the European Central Bank’s policies to German lawmakers.

Relations between politicians in the eurozone’s largest economy and its monetary guardian in chief have been sour ever since Mr Draghi said he would do “whatever it takes” to save the single currency area’s economy from collapse. The ECB’s attempts since then to steer the region towards recovery have been portrayed as an affront to the German tradition of “hard money” and low inflation — despite price pressures remaining non-existent and the central bank persistently undershooting its inflation target.

When he meets politicians in the Bundestag on Wednesday afternoon, politicians’ attacks are likely to focus on the ECB’s deployment of negative interest rates as well as a widely expected decision for the ECB to extend its quantitative easing programme beyond the current end-date of March 2017.

While Mr Draghi has largely managed to keep Angela Merkel, the German chancellor, on side, the ECB president has faced accusations from Wolfgang Schäuble, her finance minister, that the eurozone central bank is expropriating German savings and fuelling the rise of the rightwing nationalist Alternative for Germany party.

At times the criticism in Germany has sailed close to the wind: the cover of a recent edition of the business daily Handelsblatt portrayed the ECB president smoking a cigar, with which he was setting fire to €100 notes. Claire Jones, Frankfurt

Source: Fed on ropes as Yellen seeks to fend off Trump blows