The past few days have seen significant swings in the Atlanta Fed GDPNow Forecast. 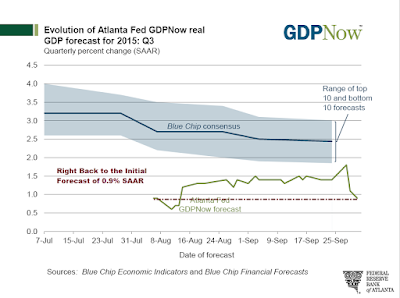 We are right back to the initial forecast in August.

Let’s investigate the Census Report Numbers to see what’s behind the 0.7 percentage point plunge on September 29.

The following table I put together will help visualize what happened. Numbers are in millions of dollars. Pay attention to the seasonally adjusted numbers.

For the deficit to widen, exports fell, imports rose, or both. Certainly manufacturing exports fell for the 4th consecutive month as noted by the ISM report.

Recall that imports subtract from GDP and exports add to GDP.

If those numbers hold, the average is about 1.8% annualized. Anyone think downward revisions coming?

Question number two: Anyone think the Fed will hike if 3rd quarter GDP is close to or below 1%?