Ukraine is bankrupt. It accepted an $18 Billion IMF Bailout in March, allegedly with strict conditions.

Do those conditions allow war funding?

I have to ask because Ukraine’s President Warns of ‘Constant Military Threat’ along with more military spending and a military parade.

Ukraine’s pro-western president announced $3bn in additional defence spending on Sunday as he warned the war-torn country faced a “constant military threat” for the foreseeable future.

Petro Poroshenko flexed his might by holding a military parade during commemorations of the former Soviet republic’s 23rd year of independence.

Things are going so well for Ukraine’s military that it needs to come up with $3 billion when it is flat broke.

Ukraine’s conflict with separatist rebels is draining the economy by the day and hampering efforts to implement reforms as required by an IMF bailout programme, Prime Minister Arseny Yatseniuk said on Wednesday.

According to the terms of a $17 billion International Monetary Fund loan package, Ukraine must implement set reforms, but the country, which is virtually bankrupt and running wide external deficits, has had to divert substantial funds in its fight to contain the pro-Russia insurgency.

The economy contracted by 4.7 percent in the second quarter compared with the same period last year. With industrial output plummeting 12 percent in July, the economic outlook for the third quarter is not promising.

In June, Yatseniuk asked the IMF, which decides on the disbursement of the second tranche of $1.4 billion on Aug 29., to take into account the extra financial burden of fighting the insurgency.

Ukraine wants to spend $3 billion out of a $1.4 billion tranche. How exactly does that work?

While pondering that question, please note that Ukraine’s currency plunged to a fresh new low today. 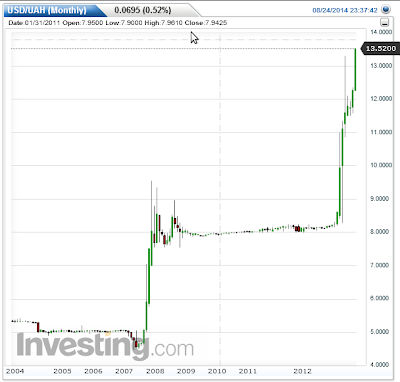 On Sunday, I reported Rebels Launch Counteroffensive: 4,000 Ukrainian Forces Trapped. That may have been an understatement.

Please consider a translation from Komsomolskaia Pravda “Donetsk On the Offensive” by Jacob Dreizin, a US citizen who speaks Russian and reads Ukrainian.

Meanwhile, the intensiveness of the Ukrainian forces’ advance had somewhat diminished.  And immediately, the militia went over to a counterattack. Large units of the National Guard got caught. Within the encirclement are 8th Army Corps headquarters, the 28th and 30th Mechanized Brigades, as well as the 95th Airmobile Brigade of the Ukrainian armed forces. And with them, the Aidar, Donbass, and Shakhtersk [Ukrainian volunteer militia] battalions. All in all, around 5000 men and more than 300 pieces of equipment, including tanks, “Grad” and “Uragan” launchers are trapped.

Another roughly 2000 National Guardsmen from Azov and Dnepr (battalions) have found themselves boxed up in the vicinity of Olenovskoe.

The militia’s strategic aim is an exit to the Sea of Azov, after which the blockade of the Donetsk Peoples’ Republic will be definitively lifted. The preparation for this “maritime campaign” was going on for a long time. Even when Slaviansk was still holding out, militia recon teams were destroying border posts on the shore.

Which Side is In Trouble?

If these reports are accurate, not only are the western media reports of “rebels on the run” blatantly inaccurate, but rather it is the Ukrainian forces that are in serious trouble.

By the way, you may wish to click on the previous link to see shelling of hospitals and civilian areas by Ukrainian forces.

This is not how you win the hearts and minds of the citizens of Donetsk.

March to the Sea

Finally, please consider a map of the area around the Sea of Azov. 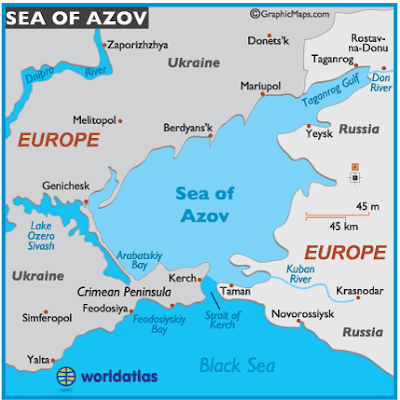 “The Sea of Azov, a northern extension of the Black Sea, is located on the southern coastlines of Russia and Ukraine. Though somewhat difficult to navigate because of its shallowness, significant levels of freight and passenger traffic do flow through the port cities of Berdyans’k, Mariupol, Taganrog and Yeysk.”

If the rebels can capture and maintain a corridor between Donetsk and  Mariupol, this war is not ending any time soon.

Let me ask again: Which side is in trouble? If the above reports are even close to being accurate, the answer is Ukraine.