Early on September 3, we warned that the Riksbank was at risk of making a meaningful policy “error” by not cutting rates ahead of the ECB announcement expected later that morning.

It wasn’t that we were anxious to see Sweden plunge further into the Keynesian Twilight Zone by taking the repo rate further into negative territory. Indeed, we never recommend going full-Krugman as Sweden did starting late in 2011 after marking a sharp policy reversal. For its trouble, the Riksbank has been left with a massive housing bubble and successive rate cuts have had only a minimal effect on inflation expectations. 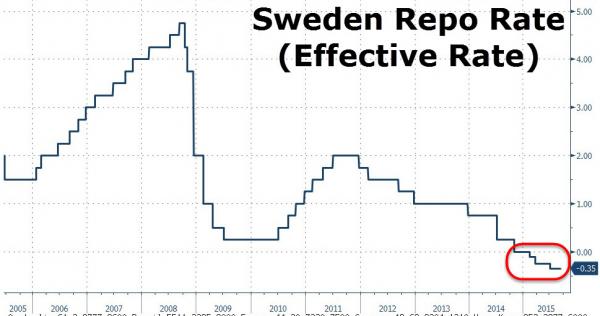 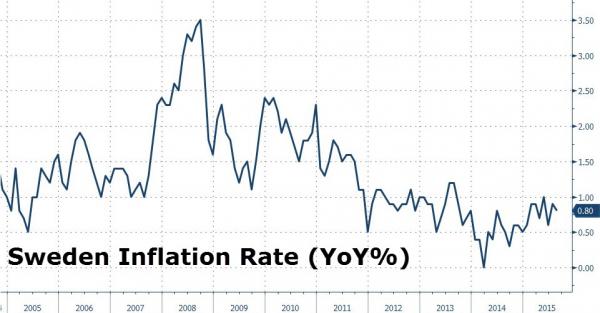 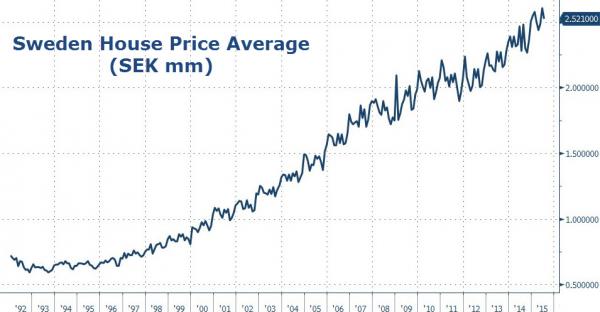 But alas, in a world that’s gone Keynesian crazy, it’s either ease or be eased upon (so to speak) and when the Riksbank decided not to cut at its September meeting, it set up the possibility that a dovish Mario Draghi would cause the krona to rise, further jeopardizing Sweden’s inflation target. In other words, the Riksbank was setting itself up to take a loss in the ongoing global currency wars.

Sure enough, Draghi raised the PSPP issue limit from 25% to 33% and then, last week, the ECB telegraphed more easing in December either in the form of a depo rate cut, an expansion of PSPP, or both.

As we discussed in “How Mario Draghi Can Force The Swiss National Bank To Go “Nuclear” On Depositors”, this puts the Riksbank and the SNB in a tough spot. Sweden’s policy options are limited. The repo rate is already deeply negative and the Riksbank is bumping up against the upper limit in terms of how many bonds it can buy without breaking the market. Meanwhile, thanks to the fact that the SNB only applies NIRP to a fraction of reserves, rate cuts by the ECB may have an outsized impact on the EURCHF cross, a decisively undesirable outcome for Switzerland.

Now, ahead of this week’s Riksbank policy announcement, Robert Bergqvist, chief economist at SEB in Stockholm is out warning that thanks to Mario Draghi, Sweden faces a veritable “nightmare.” Here’s more, via Bloomberg:

With the ECB signaling a new wave of stimulus to prop up the euro zone, the question is how Sweden’s central bank can fight the monetary expansion coming from the south with its own, much smaller toolbox as it tries to stop the krona appreciating.

“The nightmare for the Riksbank board is maybe something like this: they are gathered in the south of Sweden, looking out over the Baltic Sea, when they see a giant wave of money coming in from the euro zone and try to fight it with a hose,” Robert Bergqvist, chief economist at SEB in Stockholm and a former researcher at the Riksbank, said by phone.

The Riksbank is due to announce its next rate decision on Oct. 28. Most economists surveyed by Bloomberg see the bank keeping its repo rate at minus 0.35 percent, though there’s speculation policy makers will need to expand their quantitative easing program. Failure to do so would lead to the krona strengthening “markedly,” Nordea Bank says.

Draghi’s stimulus measures to date have already forced his Swedish counterpart, Stefan Ingves, to resort to unprecedented measures to drive up consumer prices in Scandinavia’s largest economy. He cut Sweden’s main rate below zero for the first time in February and started buying bonds, expanding the QE program several times since. Underlying price growth has stayed below the Riksbank’s 2 percent target since the beginning of 2011.

And so, we’re now beginning to see the results of the beggar-thy-neighbor monetary insanity that grips DM central banks. It’s a never-ending race to the bottom and now that everyone is moving further and further into NIRP, it’s not even clear that there is a bottom. After all, even if negative rates finally do make their way to household deposits causing rationale actors to simply withdraw their money, the monetary authorities can always just ban cash, which would effectively obliterate the idea of a “lower bound.”

In any event, perhaps the more pressing concern here is the combination of a massive housing bubble, NIRP, and a QE program that’s all but exhausted. As we noted last week when discussing Denmark, Copenhagen home prices are rising at 12% per year (or more) and yet the Danish central bank is operating on the assumption that headline inflation is half of 1%. Obviously that borders on the insane. Central banks are deliberately ignoring a sure sign of inflation on the way to citingdisinflation as an excuse for doubling, tripling, and quadrupling down on the same policies that have driven housing prices into the stratosphere. The question then becomes this: when these housing bubbles burst (and they will), how do central banks in Denmark, Sweden, and Norway intend to fight the ensuing deep recessions now that they’ve exhausted their counter-cyclical capacity?