By JAMES T. AREDDY at The Wall Street Journal

China’s economic growth is slowing, corporate earnings are under pressure, bank loans are souring and the property market is in a funk.

Seven years after a 72% crash from the market’s 2007 peak destroyed over $3.5 trillion worth of investor wealth, Chinese stocks are on track to be among the strongest in the world for a second year. The Shanghai Composite Index has about doubled since its 2008 lows, with the index up nearly 14% this year.

The country’s legions of retail investors are fueling the surge. On the streets in Shanghai, stock tip sheets sell for one yuan, or 16 cents. Near the city’s People’s Square, where small-time investors have for years gathered to discuss—and lament—the market, the crowds are larger and the voices louder.

“The higher the stock prices are, the more people are buying them,” said Gao Haibao, a 58-year-old electrician who says he has dabbled in stocks since 1990.

He was one of a group of investors last Saturday afternoon looking for an edge by studying trend lines on a laptop labeled as a “one minute” tutorial in the strategy of U.S. investor Warren Buffett. “If the prices go down,” he added, “no one wants to buy.”

The spark was similar to what started momentum for U.S. shares during their six-year rally: A bet that authorities will lower interest rates and make other moves to stimulate sluggish growth. Few investors say the market is being driven by fundamentals.

But another reason investors have returned is the government’s work to limit the likelihood of another boom-bust whipsaw. “The ’07-’08 bubble and crash was a very good lesson,” says Qian Jun, a professor of finance at the Shanghai Advanced Institute of Finance.

Addressing investor distrust in a market that isalmost exclusively traded by locals, authorities targeted a corrupt strategy among money managers called “rat trading,” a practice in which brokers front-run the market. 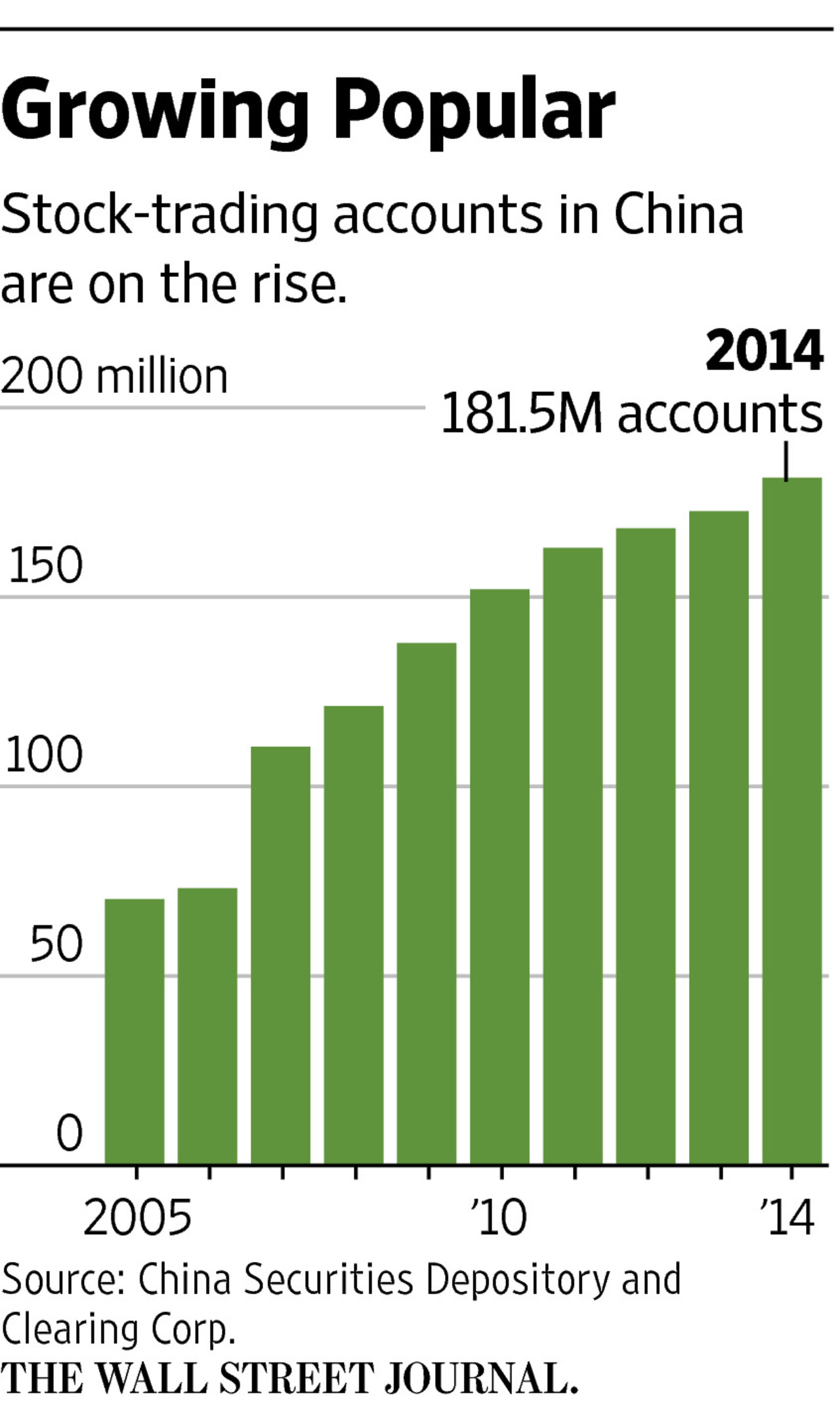 But another reason investors have returned is the government’s work to limit the likelihood of another boom-bust whipsaw. “The ’07-’08 bubble and crash was a very good lesson,” says Qian Jun, a professor of finance at the Shanghai Advanced Finance.

Officials also introduced new index products that allowed bets that the market would drop, giving investors a way to stay active without driving shares up.

Foreign investors, who are closely watched by domestic players, enjoy new ways to challenge trends thanks to the Shanghai-Hong Kong Connect, which marks the first time many of these investors have been able to actively trade Chinese stocks, via a conduit in Hong Kong.

And while brokers have received new power to lend to clients for stock purchases—outstanding margin loans now total now total 1.459 trillion yuan, or $234.7 billion, up more than 40% so far this yearalone—regulators have in recent weeks punished brokerages for overdoing it. Stock lending was about 4% of last year’s 35 trillion yuan total market capitalization, compared with 2% currently in the U.S., according to Markit.

The biggest test will come when the run inevitably stops. Another sharp drop would suggest Beijing still has work to do to convince its people that the Chinese market is more than a glorified casino divorced from fundamentals.

Skepticism abounds, however, that the rally has legs.

Andrew Polk, the Conference Board’s China economist in Beijing, points to industrial profits, which have dropped five months in a row.

UBS says there has been an uptick in the amount of stocks changing hands daily, evidence of the kind of short-term investment horizons that can cause volatility and quick market reversals.

The homegrown enthusiasm is unmatched in China-sensitive Hong Kong or among foreign investors. The Shanghai index’s surge, while impressive, isn’t as strong as either the Dow Jones Industrial Average or S&P 500, which have both nearly tripled since early 2009. 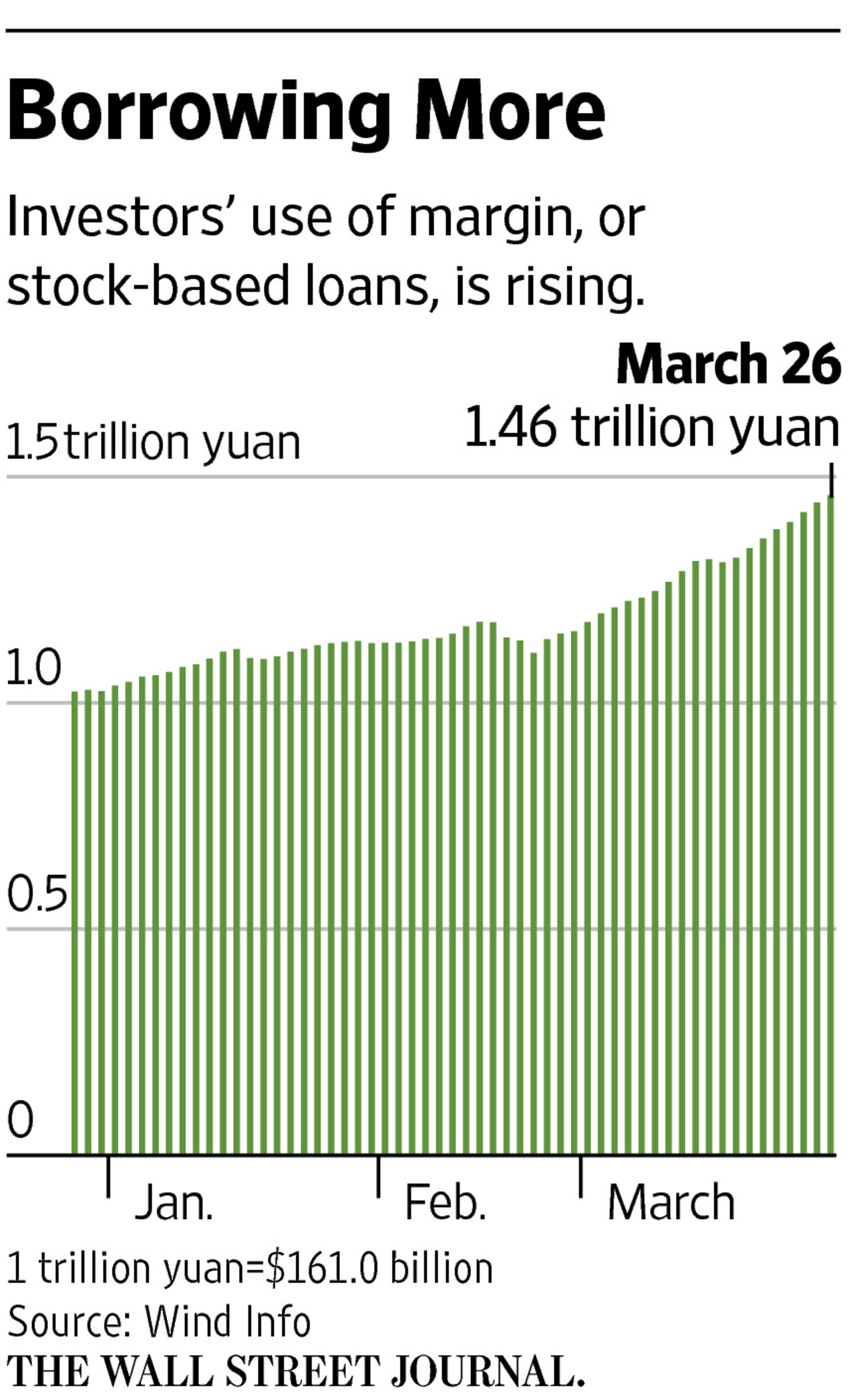 The majority of retail investors may remain as naive as ever, says Oliver Rui, a finance professor at Shanghai’s China Europe International Business School. The difference now, he said, is professional investors who weren’t in the market a few years ago like domestic hedge funds, who ensure “there are two forces available, not only one force—up, up, up.”

So far, the market run-up appears subdued compared with the previous cycle. Shares are trading about 20 times historic earnings, well below a peak of 53 times reached in 2007, according to a ratio watched by UBS.

The S&P 500 currently trades at 21 times its past 12 months earnings, according to Birinyi Associates.

After China’s stock market hit bottom during the bust, regulators trained their computers in “big data analysis” to spot trends—specifically the malfeasance that has undermined trust in the system. The idea was to leap “from human-judgment-based regulation to technology-supported regulation,” according to a statement from Pan Xuexian, a top Shanghai Stock Exchange executive and posted to its website.

One practice they targeted is rat trading.

In one high-profile case, the China Securities Regulatory Commission in 2013 charged fund manager Ma Le with illegally trading 76 stocks valued at 1.05 billion yuan and pocketing over 18 million yuan in illicit profits, according to statements from the agency, case summaries in the state-run Legal Daily and company statements. The agency said Mr. Ma, as co-manager of a select equity mutual fund run by Shenzhen-based Bosera Asset Management Co., would trade on his three personal accounts based on which stocks he know Bosera would buy and sell.

Mr. Ma couldn’t be reached. His lawyer, Liu Ziping, said Mr. Ma conceded guilt and was ordered to forfeit the winnings and pay a similar-sized fine. Bosera, which regulators banned from certain new business for a half year, said in a statement at the time its fund performed in line with its peers during Mr. Ma’s tenure and that it doesn’t condone illegal activity.

Chen Xin, an associate professor of accounting and finance at Shanghai Jiaotong University, says the rat trading crackdown was significant but that his research suggests new kinds of corruption are emerging, led by company executives who time news releases for the maximum desired impact on their personal investments and selectively leak the information. “When the market is more active, there is more manipulation,” he says.