By LingLing Wei at The Wall Street Journal

China is ramping up efforts to halt a flood of money leaving the country in response to an economic slowdown, moves that risk undermining Beijing’s ambition to elevate the yuan’s profile on the world stage.

Its latest steps involve curbing the ability of foreign companies in China to repatriate earnings, shrinking the pool of Chinese yuan available for banks in Hong Kong to make loans, and banning yuan-based funds for overseas investments, people with direct knowledge of the matter said.

The measures, most of which haven’t been publicly disclosed, follow efforts by China’s central bank to discourage investors from betting against the yuan and to crack down on overseas money transfers.

“They’re sparing no effort to prevent capital outflows,” said a senior Chinese banking executive close to the central bank. “All the measures are the most aggressive I’ve seen in recent history.” 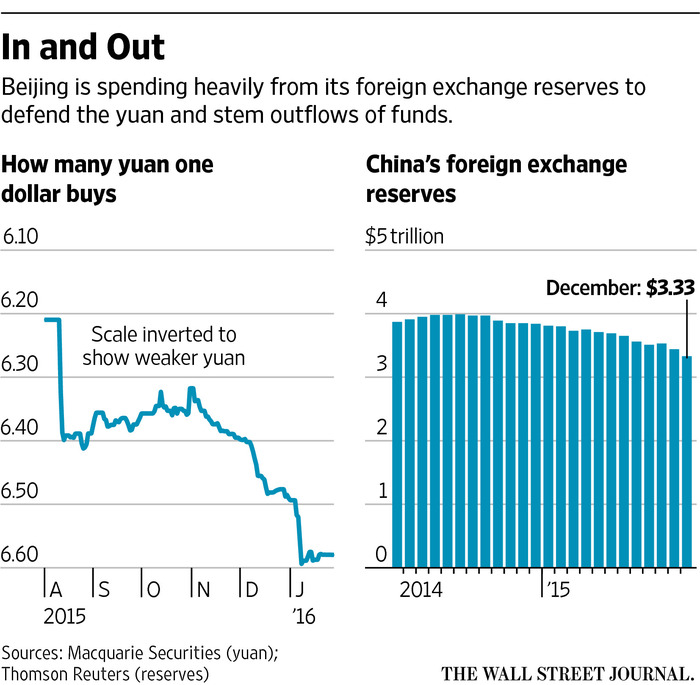 The people with direct knowledge said the People’s Bank of China, the central bank, also is considering ways to lure money back to the country, including letting foreign residents and companies buy certificates of deposit for fixed periods. Currently they are restricted to ordinary deposit accounts.

The central bank didn’t respond to requests to comment.

The unusual moves come as China burns through foreign-exchange reserves to prop up its currency and stem an increasingly vicious cycle of easing credit, a weakening currency and fleeing capital. Too much outflow, Chinese officials say, could threaten the stability of the country’s financial system.

Just two months ago, the International Monetary Fund’s designated the yuan as one of the world’s reserve currencies, a nod to China as a global economic power. Still, Beijing is now retreating from its pledges to give markets more influence in setting the yuan’s value. Many investors say they are also concerned over what they consider to be inadequate communication by the central bank.

The last time central bank Gov. Zhou Xiaochuan spoke publicly was in early September, when he sought to reassure central bankers and finance ministers from the Group of 20 large economies that the rout in China’s stock markets was nearing an end.

Investors and analysts have questioned the government’s commitment to market liberalization following Beijing’s attempts to prop up the stock market this past summer and, more recently, sending mixed signals over yuan policy.

“China is aggressively reinserting capital controls,” said Scott Kennedy, a deputy director at Center for Strategic & International Studies, a bipartisan think tank in Washington. “It appears China has for the foreseeable future given up on the goal of substantial exchange-rate liberalization.”

The most obvious sign of China’s effort to stem capital outflows is a precipitous drop in its foreign-exchange reserves, which by December had fallen by about $700 billion from a record of nearly $4 trillion in mid-2014.

China had steadily accumulated reserves since the mid-1990s as its exports boomed. But the flow reversed after China devalued the yuan in mid-August, prompting the central bank to use its reserves to defend the currency. The risk was that a sharp fall could spark capital flight, as yuan-denominated assets become less attractive to hold.

In its latest efforts, the central bank instructed banks on the mainland to require more detailed documentation from corporate customers to remit profits back to their home countries. “The process is way more stringent than before,” said a U.S. property developer who has investments in Shanghai.

Meanwhile, the central bank on Monday started to impose reserve requirements on Hong Kong-based yuan deposits parked by offshore banks at a Bank of China Ltd. unit, said the people familiar with the matter.

Many foreign banks said they were surprised by the action since the reserve requirements previously applied only to yuan deposits held by offshore banks on the mainland, according to the people.

“The central bank is squeezing liquidity in Hong Kong so it will be more expensive to wager against the yuan offshore,” Mr. Hu said.

In another effort aimed at limiting fund outflows, the central bank recently urged mainland banks to sharply raise the interest rates on any loans taken out by banks operating in Hong Kong for lending, the people said.

That has discouraged Hong Kong banks from taking yuan-based funds from the mainland, effectively making it all-but impossible to continue their yuan-lending business abroad.

“The offshore yuan-lending business is dead,” an executive at one of China’s top four state banks said.