By MARK MAGNIER at The Wall Street Journal

TENGZHOU, China—What Chinese leaders are welcoming as the “new normal”—an era of slower but better growth—translates for many businesses as a wrenching battle for survival.

Tengzhou, an industrial city of 1.5 million in eastern Shandong province, grew fast during the years of cheap, abundant capital. But since China’s slowdown started, a number of its textile, machine tool and chemical factories have closed.

China’s growth held steady in the second quarter of the year at 7%, unchanged from the first quarter, according to data released Wednesday. Although it surprised analysts who had expected a lower figure, the number is down from 7.4% growth in 2014.

Beijing recently launched a national “Made in China 2025” blueprint designed to push traditional factories to upgrade and specialize in the face of growing global competition.

One of Beijing’s biggest fears is that mass closings of factories could bring social instability. The HSBC/Markit Purchasing Managers Index shows that factories have cut jobs for 20 consecutive months. May’s culling was the fastest since the global financial crisis. 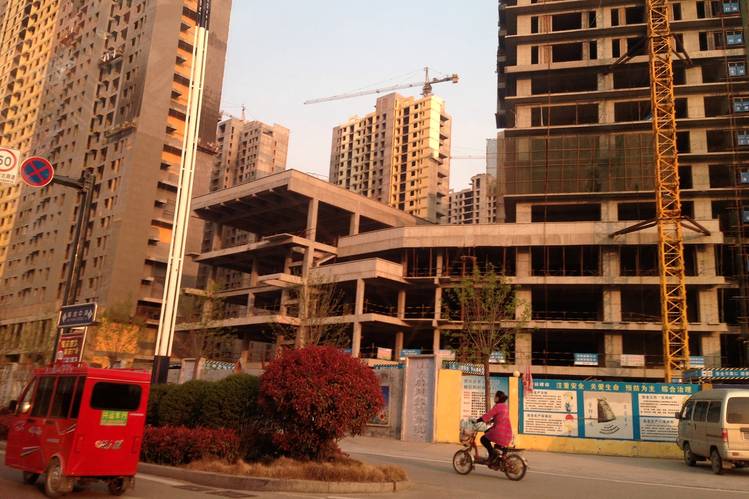 Ren Junbo, who owns a shop in Tengzhou selling drinks and instant noodles, said his business tanked after dozens of factories shut their doors.

A few blocks from his store, the Xiangyuan Apparel factory—larger than a city block and adorned with mock-Roman columns—once employed 2,000 people. It appears to have folded quickly: Half-sewn jeans sat trapped under sewing-machine needles in the building’s mostly empty hull.

For some of these factories, just continuing to churn out shirts or run-of-the mill chemicals won’t cut it anymore. Flagging demand is quickly separating the plants that can find a way to adapt from those that founder.

“Many won’t survive. It takes time to develop a good company, and it’s about more than just putting a new machine in,” said Hu Yiteng, deputy general manager of Flying Eagle Textile Co.

Family-run Flying Eagle reflects both sides of this struggle. Its traditional cotton-yarn business is stalling, but a move to specialize is allowing the 100-employee company to weather the downturn. 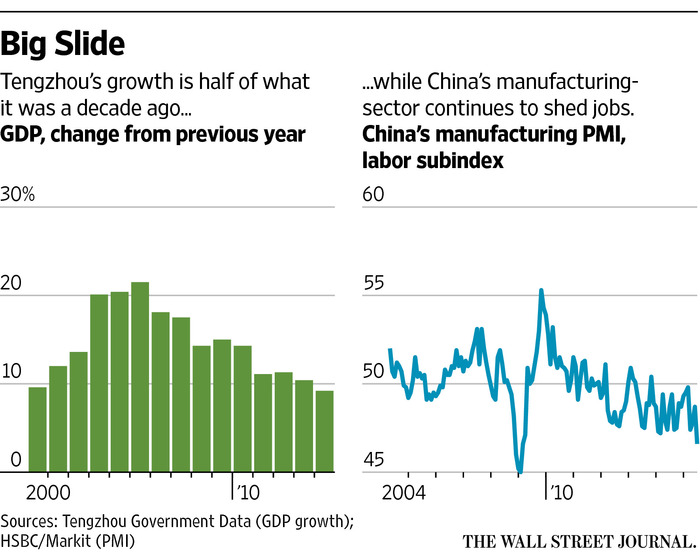 In 2008, when China was still booming, Mr. Hu returned to Tengzhou to help run the family company after studying business in Shanghai. He soon butted heads with his father as he argued that Flying Eagle should slim down and focus; his father preferred to continue the low-margin, high-volume approach. “It’s a very conservative business culture around here,” Mr. Hu said.

Eventually, his father grudgingly agreed to upgrade half of the business by developing a polypropylene roller used in machines that produce shirts, pants and other apparel. The roller is of better quality than Chinese rivals’ rollers and less expensive than foreign ones.

Since 2011, Flying Eagle hasn’t invested a dime in the embattled yarn business, located in the Tengzhou outskirts where land is cheaper. The company has explored moving that factory to Vietnam or China’s far west.

Meanwhile, Mr. Hu says the roller business generates more profit on 30 million yuan ($4.8 million) in revenue than the yarn-making line does on revenue of 200 million yuan. Flying Eagle was named a “model innovator” enterprise by the local government.

Tengzhou doesn’t release information on the number of factories that go bust or how many jobs are cut. Efforts to contact the owners of the closed Xiangyuan Apparel factory were unsuccessful, and local government officials declined requests for comment.

The city estimated its growth at a seemingly robust 9.2% last year. But that was the lowest in nearly a quarter century and half the 2005 level. In its 2014 statistical report, the Tengzhou government says the local economy was hurt by the “severe and complicated domestic and international economic situation,” citing a slowdown in the local construction industry and the low efficiency of local factories.

Some of the pressure is reflected in companies that publish financial results, including the Tengzhou unit of Jinjing Glass Co., part of a larger company called Jingjing Technology Co. The Tengzhou unit reported an 89% decline in its 2014 profits to 20.5 million yuan [$3.3 million] on 14% higher revenues.

There are other signs of tough times. At the Zhenai wholesale and retail shopping complex, among Tengzhou’s largest, there are now so few customers that shop owners race down empty hallways on electric scooters.

In one store selling funeral shrouds, owner Song Changxiu said business is about the worst he has seen it in a quarter century. People aren’t dying less often, he said. Their survivors are buying cheap polyester rather than pure cotton.

Ringing Tengzhou are dozens of largely empty and partially-built residential towers bearing names like “Family in Harmony” and “Enjoy Life.” Marketing manager Zhu Qirei in the showroom of the “Peaceful World” development said she is pinning her hopes on locals returning from elsewhere and buying property. “I can’t say what this year will bring,” she said.

Mr. Hu said his father recently acknowledged that his decision to specialize Flying Eagle was the right move. “Being big is not as important as being small and strong,” he said.