Friends, Romans, Countrymen,
I come to bury Caesar, not to praise him.

Ben Bernanke wrote it for all the world to see in November 2010 as the Fed announced QE2. QE would stimulate housing and cause stock prices to rise, leading to increased consumer confidence and spending. Here are his exact words:

…higher stock prices will boost consumer wealth and help increase confidence, which can also spur spending. Increased spending will lead to higher incomes and profits that, in a virtuous circle, will further support economic expansion.

The world knows this as the “trickle down” effect.

My position has always been that Bernanke was either an idiot or a criminal. Since he was a graduate of MIT and Professor at Princeton, there’s a good chance that he’s not an idiot, but history is replete with geniuses who had idiotic ideas born of the severe personality disorders that often accompany great intellects. As Oscar Levant famously said, “There’s a fine line between genius and insanity.”  I don’t know what motivated Bernanke, but we can add a third possibility to idiocy or criminality–insanity. Regardless of what drove these policies, enough time has now passed that there’s sufficient evidence to be able to tell whether QE/ZIRP/Trickle Down worked or not in practice.

Some of us were appalled at these clownish monetary experiments then, and subsequent trends have indeed been horrifying. We now know that Bernanke’s “trickle down” theory is bullshit, just like all of his other bogus theories and and explanations for what caused the Great Depression and why he never understood the credit and housing bubbles over which his predecessor and he presided. Sadly, Bernanke isn’t alone in his delusions. Such delusional thinking is rampant among central bankers, government policy makers, and economists in general. The fields of politics and economics have a magnetic attraction for delusional, narcissistic, megalomaniacs. The rest of society pays a never ending price.

The evidence today could not be clearer about the foolishness of QE, ZIRP, and “Trickle Down.” 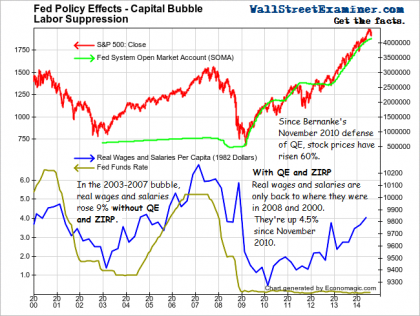 It’s true that consumer spending has risen, but real retail sales per capita are below the levels of the 2002 recession. In fact, real retail spending per capita has actually slowed from a robust 5.8% in November 2010 to 1.6% in July 2014. Sure, the wealthy are spending more and we know more tourists are coming to the US to shop, boosting total retail spending and stimulating the growth of retail, hotel, and restaurant jobs. Whoopee. But the fact is that most Americans are not spending more. Excluding those at the top, Americans are earning less and spending less. Bernanke’s trickle has pooled at the top.

Last week the consumer sentiment data continued to confirm that consumers know when they’re being bullshitted. As central bank manipulation of financial markets and interest rates has increased, consumers have grown consistently more dour about the outlook for 15 years. A few did brighten in their assessments from 2011 to 2013 but they turned more pessimistic over the past year while the stock market boomed. Americans know a fraud when the see one, just as declining sentiment from 2004 to 2007 showed that increasing numbers recognized that the housing bubble was a fraud. 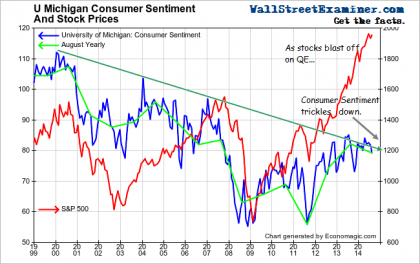 “Trickle down” is one of those big frauds. Its chief proponent, Ben Bernanke, is a proven fraudster, and so are all the central bankers, policy makers, and economists who follow in his tracks and sing his praises. Americans know it, and their hopelessness only grows, rightfully so. Our policy makers are either clowns or, worse, criminals. So let’s bury the lies already. Maybe if we face reality we have at least a chance to get this right. Sadly, it’s probably already too late.