The frightening possibility that the US economy, and the world with it, remains still bound by a single “cycle” dating back to at least 2007 (and you could even argue 2000 or 1995) brings with it nothing good about future prospects. If 2009 wasn’t really the ultimate end then that would mean the true trough is still to be found. The surface of that problem is that the Great Recession itself counted as a huge subtraction, but ultimately not conforming to symmetry in the recovery stage. Thus, the economy is less and has remained less despite the appearance of positive numbers.

To put more specificity to it requires more than just anomalous figures – though 14 million failed labor potential will suggest nothing less than a serious break with past tendencies. In some ways, the early 1980’s offers a distant template as the initial 1980 recession was created by “inflation” and then re-recession through the very same. In other words, the same problem that existed at the outset of the first event existed entirely through it even if some of the economic figures suggested a comprehensive resolution. To complete the cycle actually meant a second and greater contraction.

The distinctive problem of our own period is not one of “inflation” but of a shortage of demand (oversupply). In orthodox terms, that has meant “aggregate demand” which leads policy towards “stimulating” spending for the sake of spending through the courses of financial redistribution (with some fiscal redistribution thrown in here and there). None of this has worked to the point that even its prior proponents are either admitting serious deficiencies (secular stagnation) or changing the nature of their association with it.

Primary among those most willing, it seems, toward revision is Ben Bernanke. When he was “tasked” (by whom?) with rewriting all monetary standards and benchmarks for “market” propriety starting in 2008, there were no doubts as to the power of the office and desks which he managed and controlled. The Federal Reserves was, as he told it contemporarily, a mighty force for the good of mankind.

This control extended, specifically, through the whole of interest rate structures and across fixed income asset classes – a multi-dimensional effect of singular monetary focus. Such impressive ability was laid plain by Bernanke himself at Jackson Hole in August 2012, within weeks of announcing the third attempt at QE.

Three studies considering the cumulative influence of all the Federal Reserve’s asset purchases, including those made under the MEP, found total effects between 80 and 120 basis points on the 10-year Treasury yield. These effects are economically meaningful. Importantly, the effects of LSAPs do not appear to be confined to longer-term Treasury yields. Notably, LSAPs have been found to be associated with significant declines in the yields on both corporate bonds and MBS.

Such financial acumen was intended to be broadcast to prepare the system for the next implementation. The planned business end of that was in forging “market” expectations ahead of time; proving first that which you aim to conjure is a most curious element of assumed monetary propriety if only because markets are likewise assumed to be captured under “rational expectations.”

But that was never the problem, as interest rates and yield curves readily and easily bent to the transmitted will of the FOMC’s collective objectives. The weakness, apparent now, is that those intentions never led where they were supposed to. Low interest rates did not, as assumed, invoke anything more than artificial bursts of activity that were never greater than “transitory.” Aggregate demand, as a matter of real existence, isn’t so generic.

Writing recently, Bernanke seems to have come to terms with this shortcoming, but with a rather contradictory line of reasoning.

But what matters most for the economy is the real, or inflation-adjusted, interest rate (the market, or nominal, interest rate minus the inflation rate). The real interest rate is most relevant for capital investment decisions, for example. The Fed’s ability to affect real rates of return, especially longer-term real rates, is transitory and limited. Except in the short run, real interest rates are determined by a wide range of economic factors, including prospects for economic growth—not by the Fed.

The 2012 Bernanke was full of fury about the reach of monetary policy, that he could easily bend the will of credit markets far and wide. The 2015 version is meek and holistic, a restrained temperament that is peculiarly at odds with his prior professional self. Studies in 2012 were sure there were “economically meaningful” manipulations, but in 2015 the Fed seemingly was an afterthought the whole time. It isn’t, again, just downplaying prior boasts it is wholly rewriting them.

This part isn’t rocket science, as the reasons for the change are obvious in not abiding retribution – which should be expected. If you take the 2012 version of financial power and subtract the 2015 Bernanke which seems so timid you actually get asset bubbles. In other words, the Fed is indeed highly intrusive in the financial ends of affairs but that doesn’t amount to much in the real economy. The Fed holds enormous power, just not in the manner in which it thinks.

So the ability of policy to interject intent upon the UST curve, short rates, long rates, MBS and even corporates (junk, junk and leveraged loan junk) was the intended mechanism which was certainly and distinctly achieved; it is easily established of such major imbalances in all these places. And it is that fact which 2015 Bernanke wishes to so distance himself to the point of being rather obvious about it. This is probably as close to an admission, backwards, as he might ever get that asset bubbles exist, the Fed plays a central role and that bubbles are highly inefficient means to an economic end.

The reason for that is just as clear. In general terms, the policy of monetary bubbles is essentially one of stasis or the false sense of stability gained through fighting against dynamic reconstruction. The entire point of monetary policy is to upend creative destruction so that what wasn’t working before (at the cycle peak) is rebuilt in almost exact re-creation. That point is carried out endlessly in small ways in actual channels throughout the economy, but it was easily observed in “too big to fail.” It was finance itself, and the wholesale, volume credit capacity that was in dire need of pruning if not restarting scratch – yet it was exactly that same system which Bernanke and his cohorts sought to re-establish and return to functioning just as it had in 2005.

That is, I contend, the mechanism for unifying the business “cycle” as what was marked for destruction by the initial recession was instead propped in place by the financial power of monetary policy. That is true especially of corporate junk that easily finances businesses that might otherwise not survive on their own (or the ability of survivable businesses to “invest” financially rather than productively through stock repurchases, M&A, etc.); they are instead pegged in place and thus increasing not “aggregate demand” but contributing mightily to the overall inefficiency by which the economy actually operates.

If there is a specific point of failure which creates a massive and singular economic deficiency, or cycle, then it is certainly the point of monetary policy that favors inefficiency over dynamic, and messy, shifting. But it is the true capitalist tradition where creative destruction is “allowed” to work, through free markets, that builds sustainable progress. Monetarism, through financial means, is nothing but an impediment based upon the now-disproven (for Bernanke) delinking of financial power from visible economic gain. They were always focused almost exclusively upon GDP, which is why the housing bubble was so confounding to them. GDP may have been gaining but it wasn’t the same as a healthy and sustainable advance.

To be blunt, we have in 2015 all the problems left over from 2005 without any actual solution apart from “more of the same.” Recession is supposed to bring “less of the same” so that new opportunities can replace the old and inefficient, and the economy grows through that dynamic reprogramming – a process that cannot possibly be centralized and controlled, nor even managed solely at the edges.

In 1998, Milton Friedman wrote in his memoir that, “It never occurred to me at the time that I was helping to develop machinery that would make possible a government that I would come to criticize severely as too large, too intrusive, too destructive of freedom.” It seems to be dawning across Friedman’s acolytes and disciples on the monetary side of “aggregate demand” that the same might be true of the activist central banks which were created in that same image. They all intended that monetary policy would be used for economic gain under capitalism, but such huge power instead only created the means by which policy could be nothing but too large, too intrusive and too destructive of freedom.

There was at least some honor in Friedman admitting what was apparent, but this next generation would rather, it appears, admit sheepishly and indirectly only the effects without taking responsibility for them. Maybe that is progress in that monetary policy should lose a lot of appeal, but it is going to take a lot of reprogramming for that to bear out in large-scale effects. That, too, relates to the 2012 Bernanke which remains to this day in the conventions of mainstream media and assumptions. Despite what Bernanke says now, monetary policy is still talked about as if it were “pro-growth” and “stimulus”, powers that even its main proponent and practitioner no longer admits.

The enduring legacy is bubbles and cycles, or, again to be fully specific, bubble-based supercycles. The problem is that the 14 million “lost” labor potential may only be the beginning. 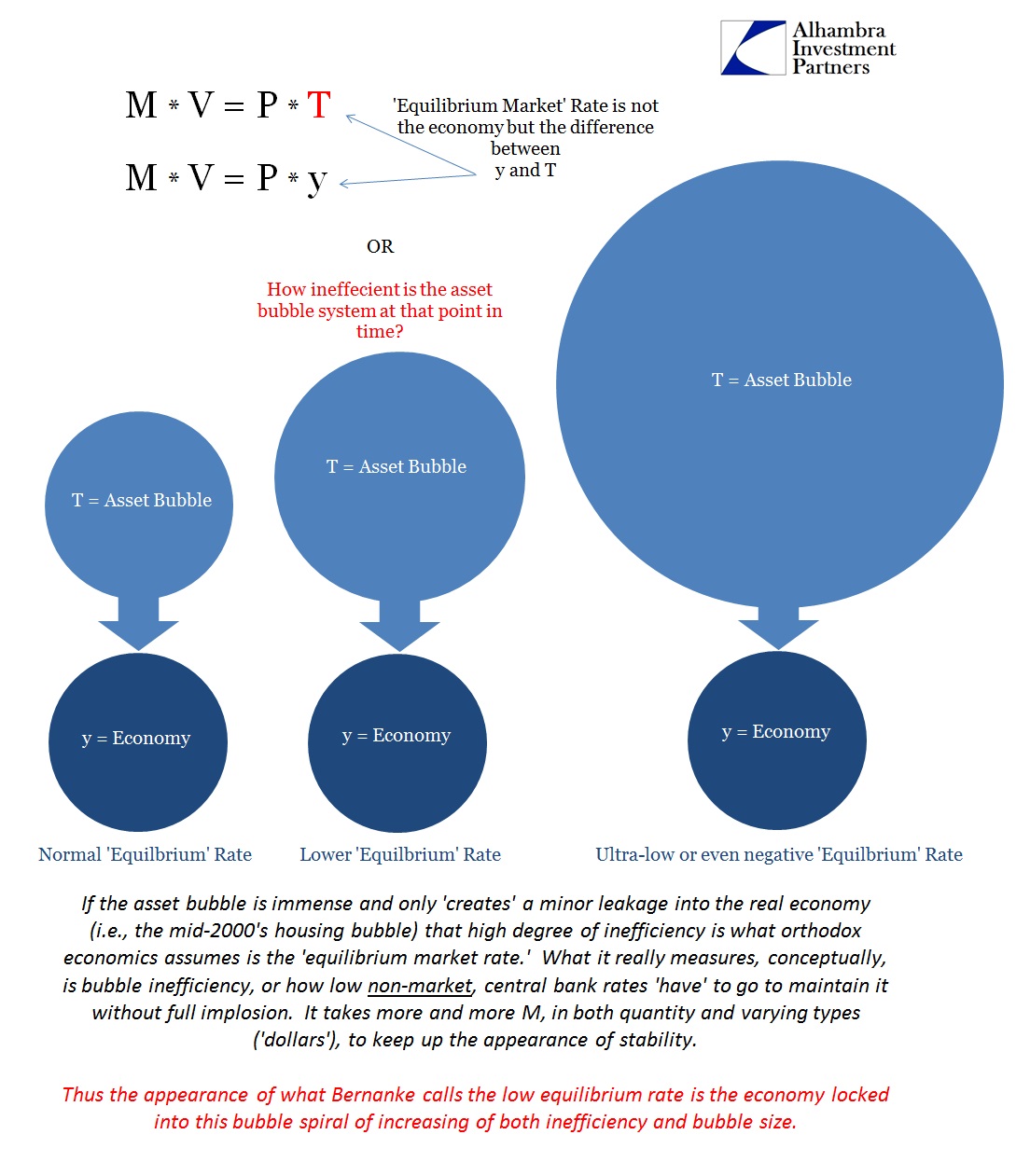