The uncanny ability of JPM’s head quant, Marko Kolanovic – the man Bloomberg recently called “Gandalf” due to his predictive success – to call key market inflection points has been extensively documented on these pages, most recently a month ago when we showed that just after he said the “rally drivers are gone with downside risk ahead”, the market proceed to swoon, two months after the same Kolanovic correctly predicted that the “technical buying begins.” 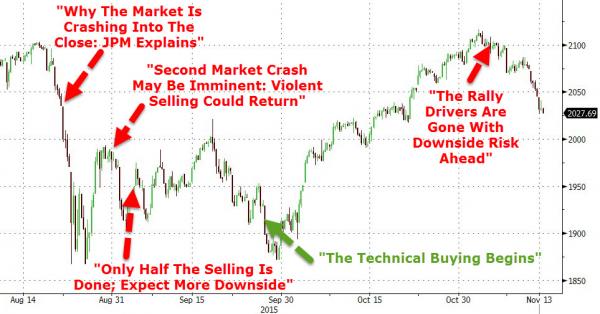 We bring up Kolanovic because earlier today he released a new note in which he together with JPM’s Global Equity Strategy team lays out both the longer-term, as well as the immediate risks facing the market.

First, we lay out JPM’s longer-term concerns for the S&P500, starting with the same one noted previously by everyone from Zero Hedge, to Goldman, to Credit Suisse to Citi: profit margins, and specifically their lack of future growth as a result of relentless dollar strength. Here are some of the main ones:

Negative earnings effect from energy is likely to fade away, but strong USD will continue to exert some drag causing further negative revisions to current 2016 earnings growth estimates of 8.5%. Equity multiple will be limited from re-rating higher, in our view. The market is of age, already trading at close to 18x (NTM) P/E and we expect higher volatility going forward.

The current year is likely looking to print flat earnings growth—negative revenue growth roughly offset by some margin expansion and significant share repurchases. While buyback activity should continue to synthetically boost earnings growth in this lackluster economic environment, margin expansion is near full exhaustion and in 2016 will possibly turn negative for the first time in this recovery. This suggests that we need at least some top-line growth in order to avoid a possible earnings recession next year. In that vein, one of the biggest risks equities face is a continuation in the strengthening of the US dollar and the Fed getting ahead of the curve (“policy error”). We estimate that a 5-6% change in the USD TWI corresponds to ~3% change in S&P 500 EPS.

Then there is the question of the what a rising rate environment will do to equity returns. Here, JPM tries to walk a fine line and spin a contraction in financial conditions as if not bullish for stocks than hardly bearish…

Historically, higher rates have meant lower but not necessarily negative equity returns. Correlations between rising short-term rates and S&P 500 performance imply a negative relationship, especially in a lower growth environment like today. During previous liftoffs equity markets have typically fared well, but the macro environment was also more supportive—GDP is less impressive now at +2.25% y/y vs. +3.4% y/y during previous episodes and the USD has increased +10% y/y on a trade-weighted basis vs. basically unchanged previously.

Which brings us to another topic covered extensively here previously: the possible inversion of the yield curve as the Fed hikes the short-end while the long-end prices in policy error, or a failure to stoke inflation. Indicatively, the 2s30s is now the flattest it has been since February.

More so, the slope of the yield curve is also a factor to consider, with the worst case for equities being a rising rate scenario with a flattening/inverting yield curve. We are not there yet, with 10s/2s spread having averaged near 140bps.

And then it gets interesting: Kolanovic’ first prediction – expect not only higher volatility but higher levels of tail risk.

Also, higher rates have typically resulted in higher market volatility. While it may be difficult to quantify, certain parts of the market could be highly levered to the prolonged zero interest rate policy (i.e., long/short, distressed funds) which may require risk to be re-priced.
In our 2015 Outlook published last year, we forecasted that the average VIX level would increase from the 2014 average level of 14 to 16 this year. The average VIX level ended up at 16.5, very close to our forecast. While historically periods of falling volatility lasted much longer than periods of rising volatility, we again forecast an increase in volatility for 2016. Our forecast is for the average VIX levels to rise from the current level of ~15 to an average of 16-18 next year. We also forecast higher levels of tail risk.

Tail risk is a measure of volatility of volatility, so we expect both quiet periods and periods of volatile selloffs such as the one we saw in August this year. Our forecast of higher volatility is primarily based on the rates cycle and uncertainty around central bank policy, as well as extremely low levels of market liquidity.

JPM also warns about a market which has lost more than half of its orderbook depth as a result of collapsing liquidity over the past decade courtesy of Reg NMS and the advent of predatory, order frontrunning HFT algos. As a result, the market no longer has any capacity to “absorb large shocks”

While equity volumes look robust, market depth has declined by more than 60% over the last 2 years. With market depth so low, the market does not have capacity to absorb large shocks. This was best illustrated during the August 24th crash.

Which then brings us to what Kolanovic believes is the key near-term risk.

Not surprisingly, the biggest potential selloff catalyst is the Fed itself and specifically the Dec. 16 FOMC announcement, which the Fed is desperate to guide as being “priced in” by the market, but considering the Fed’s track record with getting any forecast right, concerns are starting to grow. “As for near-term risks—we believe the most imminent market catalyst will be the December Fed meeting in which we are likely to see the first rate hike of the cycle.”

So far so good, but to a market which has traded mostly on technicals and program buying (and selling) in recent months, there is something far more troubling than just what the Fed will announce:

This important event falls at a peculiar time—less than 48 hours before the largest option expiry in many years. There are $1.1 trillion of S&P 500 options expiring on Friday morning. $670Bn of these are puts, of which $215Bn are struck relatively close below the market level, between 1900 and 2050. Clients are net long these puts and will likely hold onto them through the event and until expiry. At the time of the Fed announcement, these put options will essentially look like a massive stop loss order under the market.

What does this mean? Considering that the bulk of the puts have been layered by the program traders themselves, including CTA trend-followers, and since the vol surface of the market will be well-known to everyone in advance, there is a very high probability the implied “stop loss” level will be triggered, and the market could trade to a level equivalent to the strike price,somewhere in the 1,800 area, or nearly 200 points below current levels.

Which would be a tragedy for the Fed: after all, nothing is more important to Yellen, Draghi et al, than affirmative market signaling – pointing to the (surging) market’s reaction and saying “look, we did the right thing”, just as Draghi did on Friday when he explicitly talked the market higher in the aftermath of the ECB’s disastrous announcement.

The irony will be if, regardless of what the Fed does, the subsequent move is driven not by the market’s read through of monetary policy but by the “pin” in this massive $1.1 trillion option expiry, the biggest in many years, one which if recent market action is an indicator, suggests the stop loss strike level will be taken out in the process setting the “psychological” stage for market participants who will look at the drop in the market, and equate it with a vote of no confidence in what the Fed is doing, potentially forcing the Fed to backtrack in less than 2 days!

Whether this happens remains to be seen, and we are confident the Fed’s “arm’s length” market-moving JV partner, Citadel, is currently scrambling to prevent any imminent selloff. However, considering Kolanovic’ track record of hinting at key risk inflection risk, it is quite likely that whatever the ultimate closing price on December 16 and, more importantly, December 18, volatility may very soon have an “August 24” type event.