Black Hole of Negative Rates Is Dragging Down Yields Everywhere

By Christopher Whittall and Sam Goldfarb

The free fall in yields on developed-world government debt is dragging down rates on global bonds broadly, from sovereign debt in Taiwan and Lithuania to corporate bonds in the U.S., as investors fan out further in search of income.

The ever-widening rush for yield could create problems if interest rates snap back, which would cause losses on investors’ low-yielding portfolios, or if credit quality falls. And the global yield grab is raising questions about whether rates can prove reliable economic indicators.

Yields in the U.S., Europe and Japan have been plummeting as investors pile into government debt in the face of tepid growth, low inflation and high uncertainty, and as central banks cut rates into negative territory in many countries.

Even Friday, despite a strong U.S. jobs report that helped send the S&P 500 to nearly a record, yields on the 10-year Treasury note ultimately declined to a record close of 1.366% as investors took advantage of a brief rise in yields on the report’s headlines to buy more bonds. Yields move in the opposite direction of price.

As yields keep falling in these haven markets, investors are looking for income elsewhere, creating a black hole that is sucking down rates in ever longer maturities, emerging markets and riskier corporate debt.

“What we are seeing is a mechanical yield grab taking place in global bonds,” said Jack Kelly, an investment director at Standard Life Investments. “The pace of that yield grab accelerates as more bond markets move into negative yields and investors search for a smaller pool of substitutes.”

Britain’s vote to leave the European Union last month provided the latest impetus to the downward lurch as economists slash growth forecasts and predict more central-bank stimulus due to the political and business uncertainty the vote unleashed. 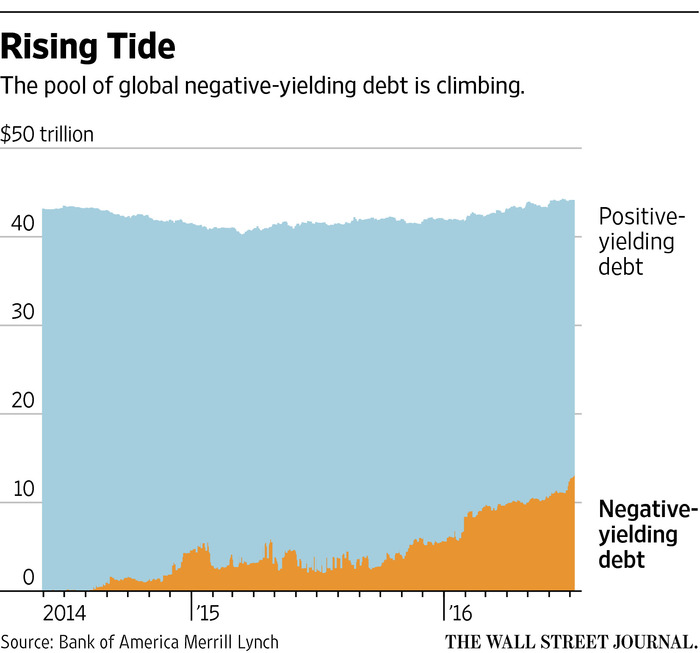 There is now $13 trillion of global negative-yielding debt, according to Bank of America Merrill Lynch. That compares with $11 trillion before the
Brexit vote, and barely none with a negative yield in mid-2014.

In Switzerland, government bonds through the longest maturity, a bond due in nearly half a century, are now yielding below zero. Nearly 80% of Japanese and German government bonds have negative yields, according to Citigroup. C 1.14 %

Now the yield grab is spreading to bonds that have a riskier profile. The more investors search for yield, the more bond yields fall.

Italy, which is in the throes of a banking crisis, has about $1.6 trillion worth of negative-yielding sovereign debt.

Elsewhere in the developed world, New Zealand’s 10-year-bond yields have fallen to about 2.3% from 3.6% as investors cast their nets across the globe.

Rashique Rahman, head of emerging markets at Invesco, said his firm has been getting consistent inflows from institutional clients in Western Europe and Asia interested in buying investment-grade emerging-market debt to “mimic the yield they used to get” from their home markets.

Clients don’t care if it is Mexico or Poland or South Korea, he said, “they just want a higher yield.”

Emerging-market debt funds saw their highest inflow on record in the week ending July 6, according to Bank of America Merrill Lynch. The resurgence in interest comes after a bumpy couple of years for the asset class, which suffered partly because of falling commodity prices and a stronger dollar. Gains in the greenback are bad for emerging-market companies and governments that have borrowed money in the currency.

Another avenue is corporate debt. About €250 billion ($276 billion) of euro-denominated corporate bonds now trade at a negative yield, according to Bank of America Merrill Lynch.

On Thursday, investment-grade-rated Walt Disney Co. DIS 0.13 % locked in the lowest long-term borrowing costs of any U.S. company in history when it issued a 10-year bond with a 1.85% coupon and a 30-year bond with a 3% interest rate, according to LCD, a unit of S&P Global Market Intelligence.

Ricky Liu, a high-yield-bond portfolio manager at HSBC HSBC 2.00 % Global Asset Management, said his firm has clients from Asia who are willing for the first time to invest in portfolios that include the highest-rated junk bonds.

Today’s yield grab could be setting up tomorrow’s problems.

Even as yields fall in emerging-market debt, for instance, the credit quality of some of these countries is falling, analysts say.

Sovereign credit ratings are on track for a record number of downgrades this year as declines in commodity prices hit emerging economies, according to Fitch Ratings. The credit-ratings firm has downgraded 15 nations in the first half of the year, compared with a previous high of 20 downgrades for the whole of 2011, around the peak of the eurozone credit crisis.

Changes in monetary policy could also trigger potential losses across the sovereign-bond world. Even a small increase in interest rates could inflict hefty losses on investors.

With the 2013 “taper tantrum,” for instance, the Federal Reserve sparked a selloff as it discussed ending its bond-buying program known as quantitative easing.

A repeat “would be very painful for a lot of people,” said Mr. Stealey of J.P. Morgan. “The market has got very comfortable with fact the yields aren’t going anywhere.”

Low yields, analysts say, are also distorting the signals for which bond markets are typically relied upon.

The recent collapse in the 10-year Treasury yield to record lows has produced signals usually associated with a slowing economy, for instance. That is despite little sign the U.S. is heading for a recession.

Recently, the extra yield investors demand to hold the 10-year relative to the two-year Treasury note hit its lowest level since November 2007. In the past, investors have taken this narrowing spread as a warning sign that growth momentum may soon slow because the Fed is about to raise interest rates—a move that would cause shorter-dated bond yields to rise faster than longer-dated ones.

Now, like much else, it is largely being blamed on investors’ quest for yield.

“In fixed income you’re forced to go somewhere to get yield,” said Viktor Szabo, an emerging-markets fund manager at Aberdeen Asset Management. ADN 2.89 % “Where are you going to get it?”

Write to Christopher Whittall at christopher.whittall@wsj.com