The kingdom’s plan to deliberately suppress crude prices in an effort to bankrupt the US shale space and preserve market share has cost Riyadh dearly over the past 12 months. The country’s budget deficit for 2015 ballooned to some 15% of GDP as oil revenue collapsed. For 2016, the deficit is expected to come in at a still elevated 13% of economic output.

The red ink has forced the Saudis to tap the SAMA reserve war chest as well the debt market. In a testament to how dire the situation has become, Riyadh also moved to cut subsidies on everything from fuel to electricity to water in order to buy some budget breathing room. The welfare state overhaul was necessary because the Saudis aren’t keen on i) dropping the riyal peg, or ii) rolling back the defense spending.

As if the situation needed to get still more precarious, Riyadh went out and sparked a sectarian showdown over the weekend by executing a prominent Shiite cleric. The Sheikh’s death triggered protests in Iran (among other countries) and before you knew it, the Saudi embassy in Tehran was on fire. That prompted Riyadh to cut diplomatic ties with the Iranians and comments by Saudi Foreign Minister Adel Al-Ahmad Al-Jubeir seem to suggest that the kingdom may be on the verge of taking more steps to intervene militarily in the region in an effort to rollback Iran’s growing influence and stop the Shiite crescent from waxing.

Of course war is costly and is generally accompanied by quite a bit of uncertainty. And if there’s anything the Saudis absolutely do not need right now, it’s more expenses and more geopolitical ambiguity. In a testament to just how unwelcome the events that unfolded over the weekend truly are, Saudi CDS is blowing out to six year wides… 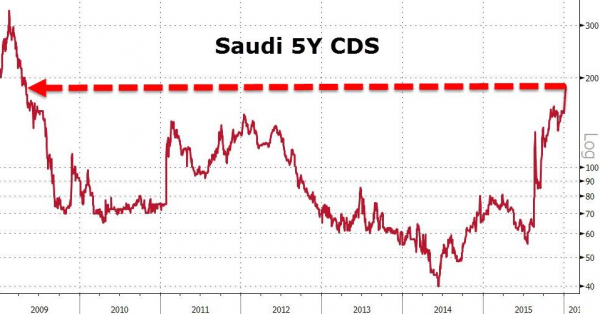 One has to believe that something is about to snap here. The only question is whether it will be the peg or the patience of the Saudi populace with a government that seems hell bent on dragging the country into the financial and geopolitical abyss.

Bonus: For those who might have missed it, here’s BofAML’s take on the “number one black swan event for the global oil market in 2016”

For oil, however, the most crucial point is what happens to Middle East currencies and in particular to the Saudi Riyal. In fact, Saudi Arabia’s FX reserves are still high and point to an ample buffer for now, but they have been falling at a relatively fast rate (Chart 21). However, should China allow for significantly faster FX depreciation than is currently priced in by markets, we believe oil prices could fall further. Naturally, the FX reserve drain on Saudi could accelerate to $18bn per month if Brent crude oil prices average $30/bbl (Chart 22), sharply reducing the Kingdom’s ability to retain its currency peg.

Saudi has been forcing prices lower by increasing production into an oversupplied market so far (Chart 23), and it also rushed to issue debt in its local market to fill a soaring budget gap. We have previously argued that Saudi Arabia’s surging output is responsible for almost half of the 520 million barrel global petroleum inventory build in the last 7 quarters. Can the government maintain this strategy of flooding the oil market? In our view, it is unlikely that Saudi leaders would want to exacerbate its ongoing reserve drain by pushing prices below $40/bbl. After all, pressure will quickly build on the riyal’s 30 year peg to the USD (Chart 24) if Brent crude oil prices keep falling. And frankly, it is a lot easier politically to implement a modest supply cut at first than allow for a full-blown currency devaluation. But a CNY meltdown could ultimately force Saudi’s hand.

In short, a depeg of the Saudi riyal is our number one black-swan event for the global oil market in 2016, a highly unlikely but highly impactful.

However, if Saudi cannot resist the gravitational forces created by a persistently strong USD and depegs the SAR to follow Russia or Brazil, oil prices could collapse to $25/bbl. Weaker commodity prices would in turn add more downward pressure on EMs (Chart 26). Thus, even if micro supply and demand dynamics are improving, the path for oil prices in 2016 will heavily depend on how the USD moves against the CNY and the SAR. Or on a Saudi supply cut.