For those who have been forced to trade the market, or provide trading recommendations, the past few months have not been kind: we have seen several instances in recent weeks where a trader lost it, where a strategist – one as prominent as SocGen’s Albert Edwards – blew up and admitted “I’m Not Really Sure How Much More Of This I Can Take“, and even a central banker went off the rails saying he and his peers are “magic people.”

Today it is the turn of one of the more prominent (and bearish) sellside high yield analysts, BofA’s Michael Contopoulos, to join the bandwagon of those driven to near insanity by the Fed, something he himself admits in a note titled “cycle not acting its age as central banks create fantasy-land.”

The HY analyst says that while his bearish stance has gotten less pronounced in the last week as “Q1 earnings data was better than it had been in 6 quarters,” he adds that his “bearish stance most definitely still remains both on valuations and our disposition about the trajectory of corporate and economic data. Long term we continue to find it very difficult to see a path for high yield corporates to grow into their balance sheets.”

That’s the fundamentals and they scream sell. On the other hand, Contopoulos adds that fundamentals do not matter when faced with activist central banks who are intent on inflating the biggest debt bubble ever, one which even Goldman warned over the weekend would lead to as much as $2.4 trillion in MTM losses if rates rise by just 100 bps: “at the same time, we fully recognize and appreciate that low global yields and the need to stay invested creates a positive technical that is difficult to fight against.”

However, it is return to the fundamentals, this precipitated his reaction: “But fight we do. Days like last Friday admittedly challenge our conviction, though. Oil down nearly 1%, and a payroll report that suggests our fears of a tightening labor market coupled with poor productivity, slowly rising wages and lackluster corporate earnings will lead to job losses later this year or early next year seem more than justified; and yet yields on our US HY index fell 3bps.”

What is provoking the most confusion?

What Perhaps the market has for now decided to overlook the following alarming statistic- during the heat of the early year selloff there were 21 important indicators. Of those 21 indicators, 16 of them are the same or worse today (Table 1). Interestingly, 3 of the indicators that are better today are related to the manufacturing sector (Factory Orders, Durable Goods and ISM Manufacturing). Personal Spending is also modestly improved (though Personal Consumption is worse) and New Home Sales is modestly improved (Existing Home Sales is much worse). With manufacturing still struggling, despite slightly better data, and a weaker consumer, we would argue that the macro landscape is as bad or worse than when investors were forecasting imminent recession (we were not in that camp). 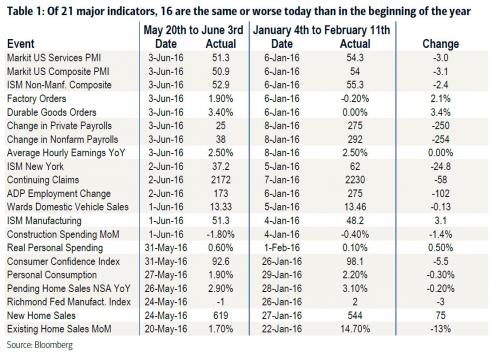 That’s just the start, because when an analyst says “we find it incredible”, you know something is off. To wit:

We find it incredible that 76% of the most important economic indicators from the selloff are worse today but yields are about 200bp lower. Perhaps this suggests central bank policy will move the cycle deep into extra innings and that they are able to slow the path to a late 2017 or 2018 recession. Perhaps we’re wrong and the market this year has a healthy return as it takes a breather from what could ultimately become the most gradual global slowdown in the history of the world. Perhaps low rates spur capex investment and continued labor force gains. Perhaps corporate profits increase as consumers continue to repair their balance sheet and the best part of the cycle is just beginning.

Alternatively, perhaps the Fed overlooks this last month’s data and Chair Yellen sounds (and acts) more hawkish than pundits expect. Perhaps the British referendum results in a leave vote. Perhaps the general election this November causes market panic. Perhaps global growth wanes and the deflation/disinflation fears once again take hold. Perhaps, we awake in October with a hike in the bag, oil back to $39 and our first negative jobs print. Perhaps oil spikes and damages households. Perhaps corporate earnings fall after their decent Q1, economic growth continues its decline and the consumer begins to rein in spending.

Ultimately, the confusion boils down to a simple question: has the Fed succeeded in making the business cycle obsolete?

… we continue to believe that the linkage between corporate earnings, Capex, credit conditions and labor productivity is not fully appreciated and will take many by surprise when companies begin to lay off more than they hire to save costs and try and expand equity multiples and the bottom line. We have likened this business and credit cycle to that of the late 1990s, and after Friday’s data we find yet another intriguing similarity- the pace of job growth has accelerated and decelerated nearly in concert with that period of time (Chart 1). Notice as well that in the late 1990s, corporate profits and payrolls declined roughly in tandem. In the post crisis years, however, EBITDA growth has been anemic throughout. This may suggest that the industries that are hiring (healthcare, food and service companies) are low profit, labor intensive industries.

It also may suggest that with margins high and borrowing costs low, the inevitable fall to negative payrolls may take a bit longer. In fact, we think there is a distinct possibility that we could live through a period of time when companies could even fire more than they hire without being in a recession, as consumer balance sheets are relatively healthy. In fact, without a banking crisis and housing crisis, we think the driving force behind the next leg in the economic slowdown is likely to be driven by households pulling back on spending as job security becomes an issue. Only unlike housing, which unraveled quickly, the consumer boom/bust cycle is likely to be slower and longer as the negative feedback loop of lower employment to reduced spending, reduced corporate profits, and more layoffs and liquidations may look less Fisherian than “glacierian”.

Perhaps… in which case the S&P may well hit 2500 or more even as profits and cash flows deteriorate with every passing quarter, leading to PE multiples that make those of the Nasdaq during the dot com bubble seems like amateur hour. After all if fundamentals are disconnected, why not go all the way? Meanwhile, as the levitation on increasingly worse fundamentals continues, we expect increasingly more traders and analysts – at least those who have been taught finance in a world where logica linkages made sense – to “lose it” in the coming months.

To all of them, our condolences: we can only suggest your click on the “online complaint form” at the Federal Reserve. Or we would, that is, if the hyperlink actually worked.