Just yesterday, we said the following about Brazil: It seems as though this country can’t get through a single day without some piece of political news or economic data creating confusion and turmoil.

We said that on the way to noting that central bank chief Alexandre Tombini looked set to resign for fear that former President Lula’s new cabinet position and attendant promise to “turn the economy around” would lead invariably to government interference in monetary and FX policy.

As regular readers and Brazil watchers alike are no doubt aware, the BRL has been on a veritable rollercoaster ride of late and it’s all thanks, one way or another, to Lula. The currency rallied on his arrest, sold off when he was offered a position in Rousseff’s cabinet, and now, is headed sharply higher after a court injunction blocked his nomination as chief of staff. 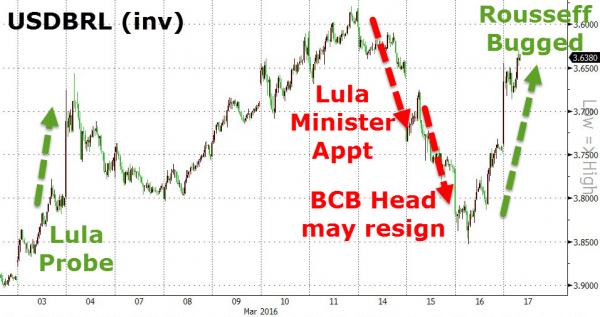 The injunction appears to stem from some 50 audio recordings released to the media on Wednesday by Judge Sergio Moro, the lead prosecutor in the car wash probe. At least one of the recordings seems to suggest that Rousseff did indeed offer Lula the ministry post in order to shield him from prosecution.

The most damning call was recorded on Wednesday afternoon, when Rousseff can be heard telling Lula that she is sending him his ministerial papers “in case of necessity.” Obviously, that sounds a lot like an attempt to make sure Lula has proof of his new position in case authorities come to arrest him before he’s sworn in. In Brazil, ministers can only be tried in the Supreme Court which, as you might imagine, could take virtually forever compared to lower courts.

Lula was questioned earlier this month in connection with the possibility that he received luxury properties in exchange for favors tied to the Petrobras scandal.

Well, he’s got one thing right: everyone is “fucked,” and Moro doesn’t care. “Democracy in a free society requires that the governed know what their governors are doing, even when they try to act in the dark,” he said.

“Moro also said he believes Lula had advance warning of the raid on 4 March and may have known his phone was tapped,” The Guardian notes, adding that “by midnight on Wednesday there were reports of demonstrations against the government in at least 17 of Brazil’s 26 states. In the southern city of Curitiba, where Moro is based, hundreds gathered in front of the court to show support for the judge and his investigation.” 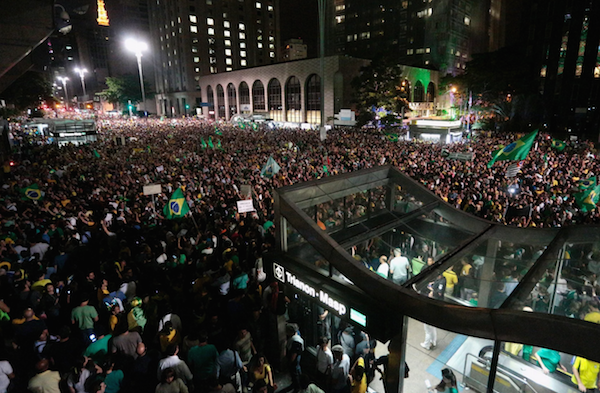 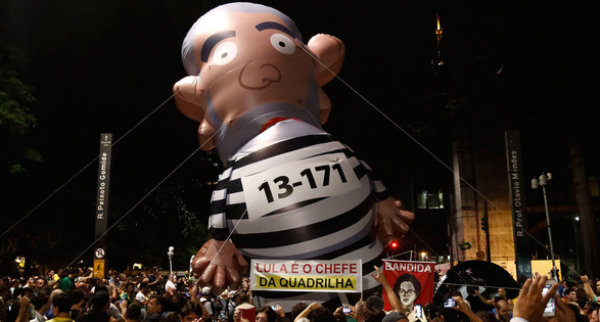 Rousseff says the court and the media’s interpretation is incorrect. She claims that she was trying to tell Lula that she was sending him his papers early in case he was unable to attend the swearing-in ceremony.

Put simply: no one was buying that excuse.

“Military police fired tear gas at demonstrators outside government buildings in Brasília, while groups set fire to a doll resembling the ex-president and waved banners calling for his imprisonment,” FT recounts, “[While] thousands of protesters filled São Paulo’s main avenue, Rio de Janeiro’s Copacabana beach and cities in at least 15 other states.”

Rousseff now intends to take legal action against Moro for “breaking the constitution. Here’s a summary of Rousseff’s comments, some of which are outright hilarious in light of the circumstances:

A lawyer for Lula called Moro’s release of the tapes “arbitrary.”

Right. “Arbitrary.” In fact, there was nothing “arbitrary” about it. Moro was due to decide on whether to arrest Lula this week and effectively, he and Rousseff were about to circumvent the entire investigation by using ministerial immunity to keep the car wash probe from reaching any higher up in the government than it already has. In other words, it was now or never for Moro and as you might have noticed, he isn’t one to let things go.

The release of the tapes led to a raucous session in Congress where some lawmakers chanted for Rousseff’s head, figuratively speaking… we think. Here are some clips from the protests that swept the country on Wednesday:

This, ladies and gentlemen, is what’s called chaos. Just ask Delcídio do Amaral, the senator whose testimony has only added to Rousseff’s troubles. “I am a prophet of chaos,” he told reporters after the court accepted his plea deal.

According to Eurasia, the leaked phone calls put Rousseff on the brink of impeachment, with odds of her ouster now rising to 75%. A vote, Eurasia says, could come as early as May.

“We’re in the hands of leaders who are bandits,” said Arivaldo Gomes, 54, a deliveryman. “I’m ashamed of this country,” he told The New York Times. But perhaps Josias de Souza, a political commentator put it best: “Brazil is being governed by a joke. It’s turned into an aspiring banana republic.”