Bubble Finance At Work: A Tale Of Two Economies

By NICK TIMIRAOS and KRIS HUDSON at The Wall Street Journal

Five years ago, Quadrant Homes churned out starter houses in the Seattle area with an average sales price of $269,000 and the marketing slogan, “More House, Less Money.”

But facing a debt-burdened middle class and rising land prices, Quadrant has since exchanged entry-level buyers for customers free of credit worries and ready to splurge. Its new slogan, “Built Your Way,” accompanies homes with vaulted ceilings and gourmet kitchens that last year sold for an average price of $420,000. “We used a lot of market research to tell us that our old model wasn’t going to work,” said Ken Krivanec, Quadrant’s chief executive.

The emergence of a two-tiered U.S. economy, with wealthy households advancing while middle- and lower-income Americans struggle, is reshaping markets for everything from housing to clothing to groceries to beer.

“It’s a tale of two economies,” said Glenn Kelman, chief executive of Redfin, a real-estate brokerage in Seattle that operates in 25 states. “There is a high-end market that is absolutely booming. And then there’s everyone in the middle class. They don’t have much hope of wage growth.”

The recession blew holes in the balance sheets of all U.S. households and ended a decadeslong loosening of credit for middle-class borrowers. Now, credit is tight, and incomes have been flat or falling for all but the top 10th of U.S. income earners between 2010 and 2013, according to the Federal Reserve.

American spending patterns after the recession underscore why many U.S. businesses are reorienting to serve higher-income households, said Barry Cynamon, of the Federal Reserve Bank of St. Louis.

Since 2009, average per household spending among the top 5% of U.S. income earners—adjusting for inflation—climbed 12% through 2012, the most recent data available. Over the same period, spending by all others fell 1% per household, according to Mr. Cynamon, a visiting scholar at the bank’s Center for Household Financial Stability, and Steven Fazzari of Washington University in St. Louis, who published their research findings last year.

The spending rebound following the recession “appears to be largely driven by the consumption at the top,” Mr. Cynamon said. He and Mr. Fazzari found the wealthiest 5% of U.S. households accounted for around 30% of consumer spending in 2012, up from 23% in 1992.

Indeed, such midtier retailers as J.C. Penney , Sears and Target have slumped. “The consumer has not bounced back with the confidence we were all looking for,” Macy’s chief executive Terry Lundgren told investors last fall.

In luxury retail, meanwhile: “Our customers are confident, feel good about the economy in general and their personal balance sheets specifically,” said Karen Katz, chief executive of Neiman Marcus Group Ltd., last month. Reported 2014 revenues of $4.8 billion for the company are up from $3.6 billion in 2009.

Revenue for such luxury hotel chains as St. Regis and Ritz-Carlton rose 35% last year compared with 2008, according to market research firm STR Inc. Revenues at midscale chains such as Best Western and Ramada were down 1%. 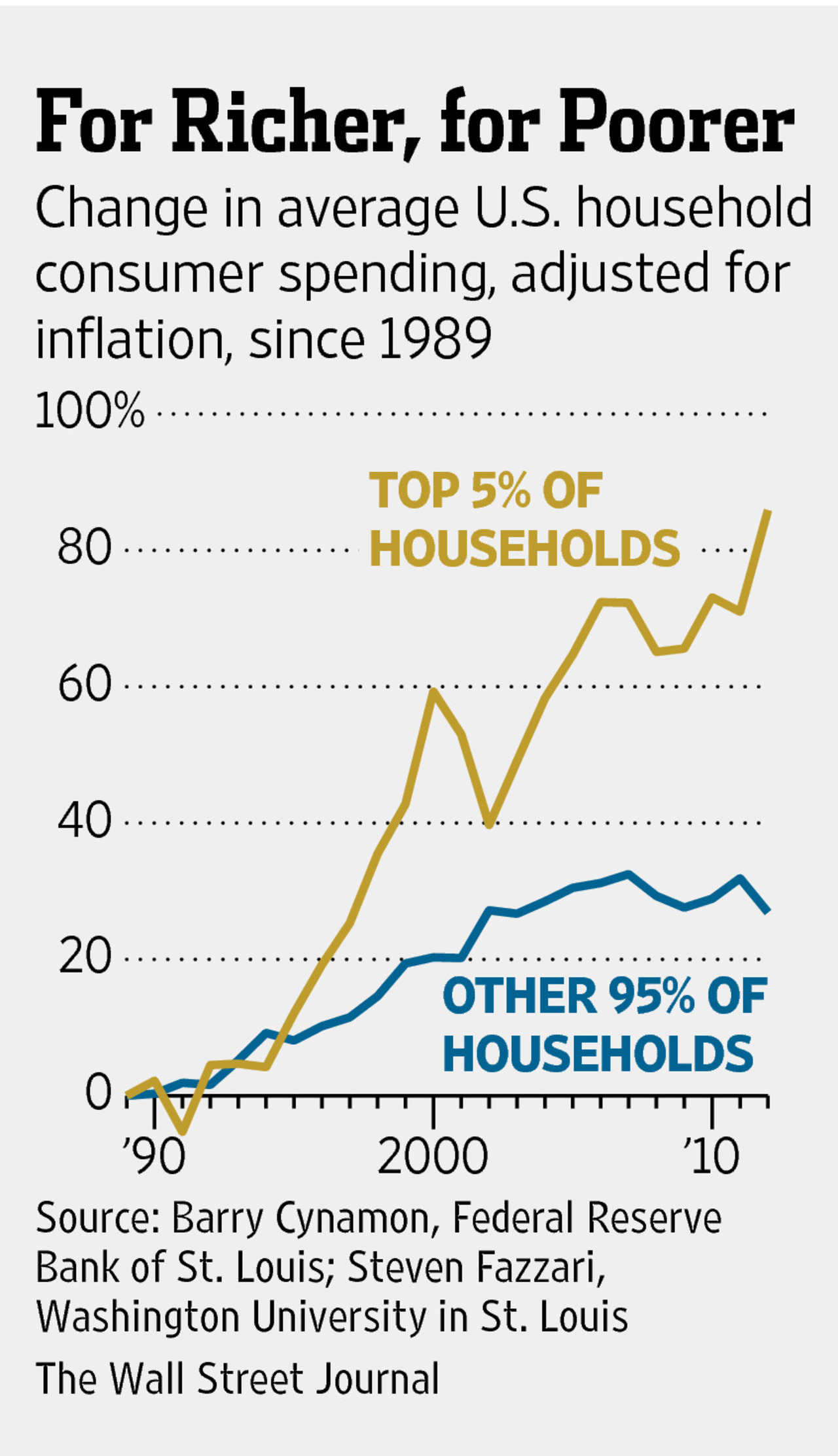 “Demand bifurcated,” said Jason Green, chief executive of the Cambridge Group, a growth strategy firm that is part of Nielsen NV. “The familiar stuff my middle-class family had in the pantry, those are under significant pressure.”

In the grocery market’s middle tier, Safeway Inc., the second-largest supermarket chain in the U.S. was purchased last year by the private-equity group that owns Albertsons, the fifth-largest grocery retailer. Company officials said the deal would allow the companies to reduce costs—and lower prices for customers—as they fend off competition from low-price outlets and high-end stores.

In the cold case, sales of premium lagers are up 16% since 2007 after adjusting for inflation, while sales of economy brands grew 8%, according to research firm Euromonitor International. Sales of midprice beers are down 1%.

The trend hit auto makers some years ago, when BMW AG ’s former chief executive Helmut Panke described the U.S. market as an hourglass: lots of demand for budget and luxury brands but little in between.

Steve Bates, general manager of BMW Seattle for the past 12 years, said new-car sales at his dealership were up 25% last year, while used-car sales were flat. The M4 series, a sporty coupe priced from $64,000, has been “selling out as soon as it touches the ground,” he said.

Then there are consumers like Vicki Oliver, 68 years old, of Temecula, Calif. She bought a used Hyundai Sonata last year to replace a wrecked 1995 Ford Explorer. Ms. Oliver and her husband, a real-estate agent, added onto their home two years ago so her daughter and son-in-law, a general contractor, could move in with their family.

“That was a way to make things work in hard times,” Ms. Oliver said. Caribbean cruises and trips to Florida are now memories. “We haven’t done that for years,” she said.

The housing market illustrates how weakness among middle-class consumers holds back the U.S. economy. Homes are generally the biggest purchase Americans make. Housing dollars ripple through the economy by triggering spending on appliances, furniture and landscaping. 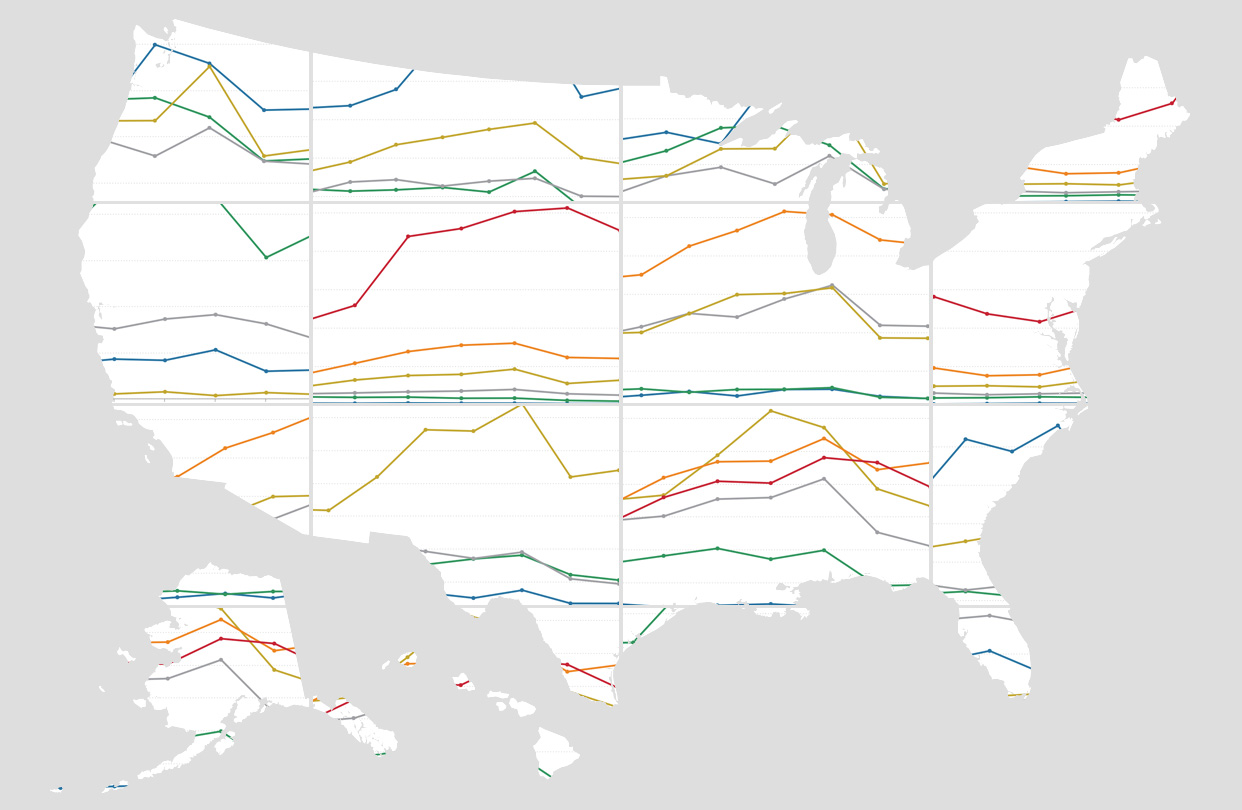 In Seattle, the median new-home size topped 2,500 square feet last year, a record, according to research firm Metrostudy Inc. Since the market hit bottom in 2011, sales of new homes priced above $600,000 have tripled, while sales below $400,000 are down 16%, according to CoreLogic DataQuick. 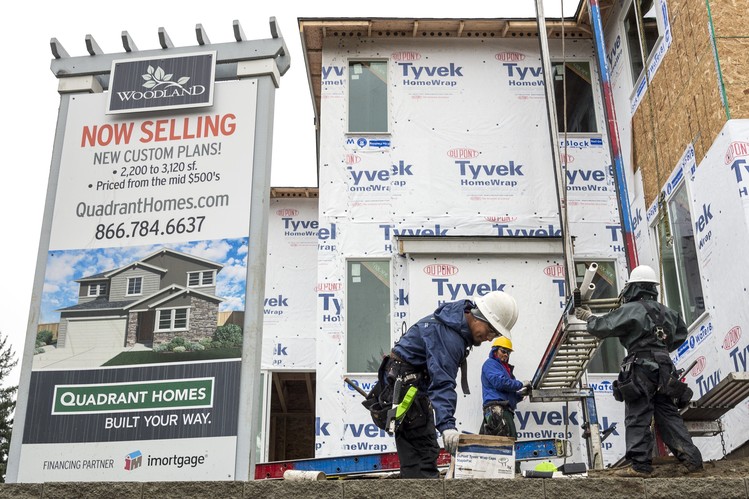 “Over the long haul, I worry that you can’t run our housing market, which depends on volume, on affluent buyers alone,” said Diane Swonk, chief economist at Mesirow Financial in Chicago.

Young households have been slow to buy homes because of the tough job market. Many would-be buyers can’t save enough for a down payment or don’t earn enough to qualify for a mortgage. Student debt holds others back.

A typical household, for example, would need around $60,000 in cash to make a 20% down payment on the median-priced new home in the U.S. To qualify for a mortgage, they would need good credit and to show an annual income of about $45,000, assuming little other household debt. A government-insured loan in this example could call for an $11,000 down payment but would require an annual income of $60,000.

Lisa and Nathan Trione are looking for a house in Denver big enough for their five children. But there is little in their price range: $250,000 and under.

“You’re already intimidated by the process,” said Ms. Trione, a 28-year-old paralegal and office manager. “And then you see this huge price, and you say, ‘I’m not ready to do that right now.’”

Ms. Trione is paying off debt she incurred while earning her associate degree. She also is trying to raise her credit score, which, she said, fell during a series of early financial missteps.

Well-heeled customers, meanwhile, have their pick of mortgages. At the same time, some banks have pulled back from federally insured loans that allow for smaller down payments.

With fewer potential customers, builders have largely abandoned the entry-level market. “If a builder can make money on something, he’ll build it. The problem is that they can’t make money at the entry level,” said John Burns, of Irvine, Calif., a consultant to builders.

But rentals, the low-end of the housing market, are booming. Apartment construction has neared its fastest pace since 1989. Two of the nation’s largest home builders, Toll Brothers Inc. and LennarCorp. , have both launched multifamily construction divisions, each with around 5,000 units in the pipeline.

“We all wished we had a big apartment portfolio through this downturn,” said Douglas Yearley, Toll’s chief executive, during an earnings call last year.

With sales plunging in 2009, Quadrant called in a research firm that concluded more buyers might materialize if the company built more expensive homes. “When it’s data driven, the courage to make a remarkable change is easier than when you’re using your gut,” said Mr. Krivanec, the company’s chief executive.

Quadrant, a unit of TRI Pointe Homes Inc., was finishing seven homes per workday in 2004. They now finish less than two of the more expensive houses a day. But the share of buyers who back out of a deal, typically because they can’t get a loan, is down 10% since 2010.

To serve more higher-end buyers, Quadrant opened a design studio two years ago that lets buyers choose from dozens of cabinets, countertops, tiles and flooring. Some new buyers spend nearly twice as much on such upgrades, the company said, which adds to the profitability of home sales.

Common design features now include a walk-in closet and bathroom nearly as big as the master bedroom. Kitchens have a walk-in pantry.

On a recent Tuesday afternoon on Little Bear Creek Place, a cul-de-sac in this Seattle suburb, electricians, landscapers and framers worked on some 23 Quadrant home sites.

Nearby, Nick and Adriana Stoll unpacked boxes in their new four-bedroom home. The home is twice the size of the 1,200-square-foot, one-bedroom apartment they rented in nearby Bellevue. 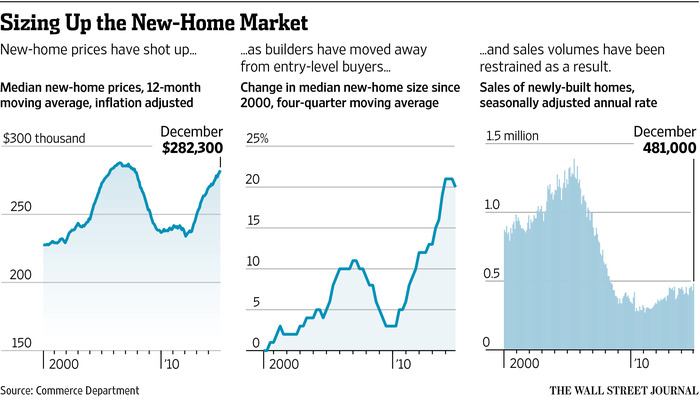 The Stolls customized almost every feature and finish, including hinges on kitchen cabinets that prevent the doors from slamming shut. “I’m typically the kind of consumer where I make a quick decision,” Mr. Stoll said. “But when it comes to your home, well, we stared at 100 countertops for an hour.”

The Stolls survived the recession and have prospered. Mr. Stoll purchased a Seattle condominium in 2008, the day before learning he was losing his job at Washington Mutual, the thrift sold to J.P. Morgan after it was seized by the Federal Deposit Insurance Corp.

Mr. Stoll changed jobs twice before he was recruited in 2011 to work at a technology company. He broke even on the sale of his condo last year. “Other people encountered problems where maybe it’s student loans or credit cards or car payments,” he said, “and we have none of that.”

The couple put 20% down on their new home, which cost $579,000. Ms. Stoll works as a client associate for a large financial services company.

Growth in new home sales this year will depend, in part, on whether builders revive their interest in first-time buyers.

Mr. Krivanec, Quadrant’s CEO, said he doesn’t see a return to his company’s former model. There are enough people with good-paying jobs in the area—at Boeing , Amazon and Microsoft—to keep sales going, even it means building fewer homes. “We like where we’re at,” he said.

How a Two-Tier Economy Is Reshaping the U.S. Marketplace – WSJ.