But you also can’t get closer to the jack-pot than have the momo traders who have cycled this high-flyer to the moon and back since its 2009 IPO. Priceline (PCLN) announced last week that it will pay roughly 112X for the reservation app pioneer—-even though it has stalled for two years, is assailed by numerous aggressive competitors (e.g. Yelp, GrubHub and numerous international players) and is not protected by any evident moat of technology or branding. Indeed, as one analyst noted,

And that’s not to mention OPEN’s new style “growth” strategy. During the past three years, it did mange to generate $73 million of net cash flow from operations after CapEx and other investments. But then it used $75 million to buyback shares! Yes, nowadays boom-time “start-ups” are doing buybacks as soon as they’re out of their underwriters lock-up.

But it’s not hard to understand why Open Table’s new stock needed some juicing. It debuted at 600X reported EPS and within two years of the IPO, the boys, girls and robo-traders which prowl around momo land had its share price up from $20 to $110.

That was a 5X gain in less than 24 months, but to be sustained it implied a monumental explosion of reservations at 10 cents net per customer. So maybe the big stock buybacks which commenced in 2011 were just a bridge to get the fast money out before OPEN plunged to $32 per share 6 months later.

In any event, after a few months in sub-$40 purgatory, the “buy the dip” recovery began, helped by  “takeover” rumors that lifted the stock back into the $70-$80 per share range. Eventually there was the usual “unusual” action in options, and then last week the stock soared back to $104 or nearly its post-IPO high, meaning a 40% “merger Friday” payday for the smart money options players who had the prescience to buy on the dip. 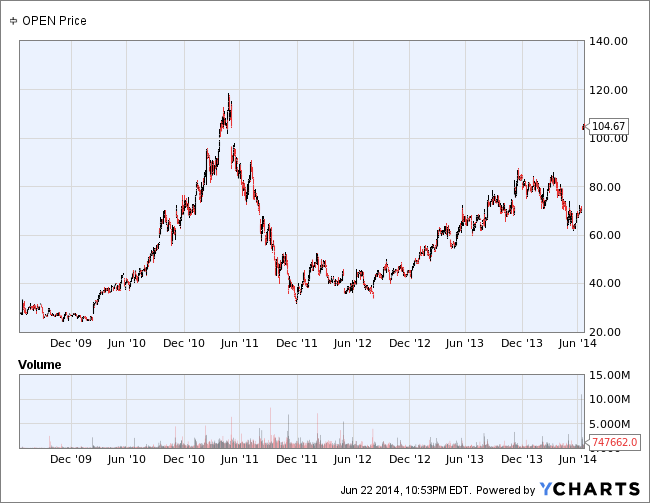 But never mind. The whole market cap of OPEN at the deal price is only $2.6 billion. What’s that to a momo monster like Priceline with a market cap of $65 billion—and trading at a mere 35X. The deal farmers in Silicon Valley are trading mules again!

Yes, there is the usual chatter about massive synergies wherein PCLN will extract more profits from mom and pop restaurants owing to its leverage with giant hotel chains like Best Western, Marriot International and Hilton World Wide. How does that work, exactly?

And there also appears to be an endless supply of “addressable” dinner plates—something like 3 billion worldwide on any given day. On the math of the thing, that adds to the trillions annually—-so the fact that in seven years OPEN have booked only 570 million reservations worldwide apparently means the frontiers are endless!

Or “scalability” isn’t. Back in its 2009 IPO year, OPEN had SG&A expenses of $29 million on about $69 million of sales, meaning that it took a lot of efforts and marketing—-about 42 cents on the dollar—to collect a net dime per reservation.  Since then, revenues have about tripled to $200 million, but SG&A is still absorbing around 40 cents on the revenue dollar. In short, there have been no economies of scale evident because the addressable market is still largely an expensive to reach  neighborhood business.

Nor is there any reason to expect that pricing will improve as competitors flood the field both here and abroad. Indeed, pricing is already eroding and OPEN’s sign-up fees—its major original source of revenues—- appear to be a barrier to growth that could readily disappear.

So the likelihood that the OPEN acquisition will earn its 112X price tag is at least open to considerable doubt! But in the Fed’s casino, that matters not a wit. If the deal is a bust—as most M&A deals are at the kind of frothy bubble peaks now extant—it will be written off as a “non-recurring” liquidation of goodwill, and a mistake to be completely ignored.

But here’s the point. In a honest free market, the killing just made by the momo traders on OPEN would be about as rare as a white buffalo (one per 10 million births). To begin, the cost of options to position during the dips and ride out the pre-deal interim as shown above would be far more prohibitive in a two-way market for stocks overall. Indeed, cheap options insurance against a tumble in the broad market is what makes the momo game work, yet without the Greenspan/Bernanke/Yellen put such massively subsidized “downside” insurance would not exist.

Likewise, 100X M&A deals in the face of the massive business model uncertainties posed by the likes of OPEN would also be extremely rare. Without recurring bubble inflations that seem to run in five year intervals—as has been the case during the 1996-2000 dotcom bubble, the 2003-2007 Greenspan/housing bubble, and the 2009-2014 Bernanke/Yellen “wealth effects” bubble—- markets would never be so forgiving of “non-recurring” mistakes by corporate acquirers. Stated differently, the discount rate on the business risk of innovative but vulnerable start-ups like OPEN would be dramatically higher.

And that would be healthy all around. The artificial attraction of massive capital and trading leverage  (through options) into rank speculation like the PCLN/OPEN deal here does not stimulate sustainable economic growth or a true rise in capitalist prosperity. It simply generates unearned rents for the 1% who have the financial assets and access to play in the Fed’s casino.