The Case Shiller home sales price indexes (CSI) overweight the sales of old houses and bank REO sales. The CSI indexes do not count sales of newer homes in good condition. As a result of that methodology, the CSIs seemed to do a good job showing when metro housing markets were beginning to roll over at the Great Housing Bubble top. Lower quality properties and increasing distress sales would obviously lead the market way down.

However, because Case Shiller indexes overweight older properties and distress sales, they missed the beginnings of the price bottom in 2010-12, and they typically lag the current housing market inflation on the way up.

In many US metros, median home prices are now well above the 2006-07 peak bubble levels. Newer, better quality homes perk up in price first and they inflate the most. As markets get frothier on the way up, the sales of better properties become an ever greater weight in the market. If you ignore them, then the fact that a market is in a bubble will be invisible. That’s what Case Shiller does. It ignores the hottest parts of the metro markets, either minimizing the magnitude of the bubble, or hiding it altogether.

Earlier this week I gave the example of Chicago. Median sale prices show that that market is clearly in a raging bubble. But Case Shiller shows that the market is still depressed because it overweights older properties and distress sales while not counting the hottest parts of the market. The Chicago downtown and lakefront markets are underrepresented because many of the properties are new or flipped rehabs. In cases of older home paired sales in the hottest neighborhoods, new rehab resales are excluded. If someone buys an old house, fixes it up and resells it within 6 months of his or her purchase, the second sale isn’t counted even though it represents the current state of the market.

Conversely, houses which have become functionally obsolete (out of style) or have years of physical depreciation are counted in the index. These older, unrenovated houses normally inflate at a slower rate than newer properties. So the market looks a lot lower than it is. Case Shiller measures what it measures. But it does not measure “the market.” It should be named the Case Shiller This Old House Index.

I looked at several other markets to compare the performance of the CSIs with the median home sale prices in those markets. I described the methodology I used to compare the CSIs with a like price index representing the entire market but excluding bank sales in the Chicago piece.

Using the same methods, I developed charts of Boston, Miami, DC and San Francisco. I was also interested in Los Angeles but was unable to find data on the 2000-2009 period but I did find another source that enabled a graphical perspective.

So, ladies and gentlemen, without further adieu, I present to you the Boston, Miami, DC, San Francisco, and Los Angeles show.

Boston shows how CSI led the way at the initial downturn from the top of the late Great Housing Bubble by emphasizing old houses and bank REO sales. But it lagged badly at the upturn from the crash lows and has understated the size of the rebound. The median price in Boston is now up 20% from the bubble peak. CSI shows only a 5% gain.  But to give credit to the MSSR (Soviet Socialist Republic of Massachusetts), per capita income is up 20.8% (nominal actual) from 2007 to 2015 according to the BEA. Boston shows a similar trend through 2014 available data. Personal income gains have kept pace with housing price increases. Affordability was a huge problem in the Great Bubble. It is less so today only because the Fed has provided a huge mortgage subsidy to buyers. 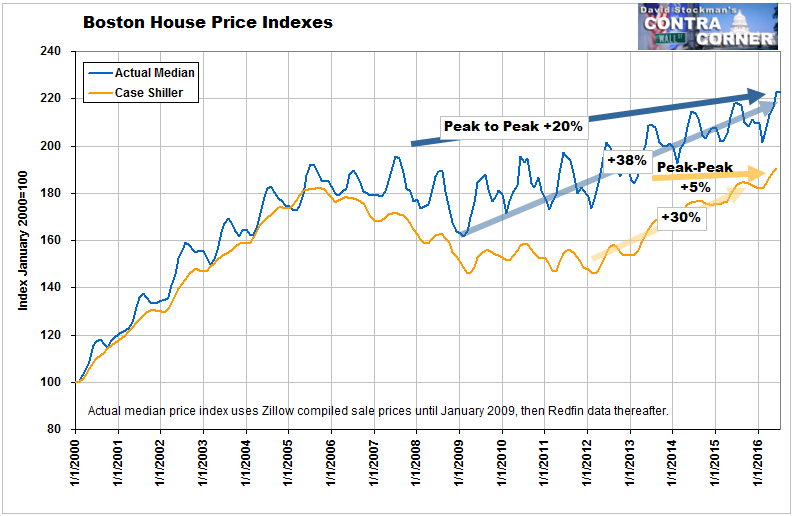 Washington DC is an interesting case. The CSI has gained the same percentage peak to peak as median sale prices at 5% and it is up more than the median price since the bottom. It did lag the turn significantly at the low, but this is one market where the CSI has mirrored overall median market price performance. 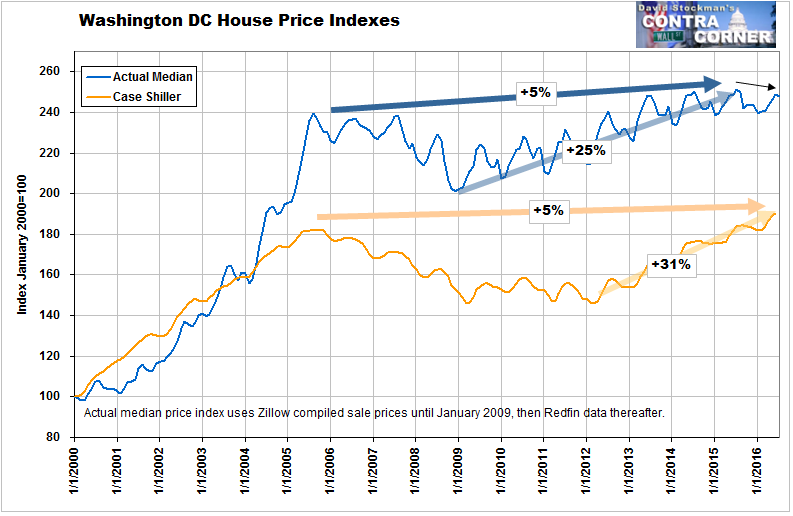 Per capita personal income in the DC market is actually up more than house prices, with a gain of approximately 12% between 2007 and 2015. With prices above the last bubble peak, Washington probably has a bubble, but it appears to be less severe that the Great Housing Bubble, and less severe than other bubble markets around the US.

Miami is back in bubble territory, but is not above the 2007 peak. However it is much closer to that peak than the CSI suggests. Actual median sale prices are just 3% from the Great Bubble high. The CSI shows them still down 24%. 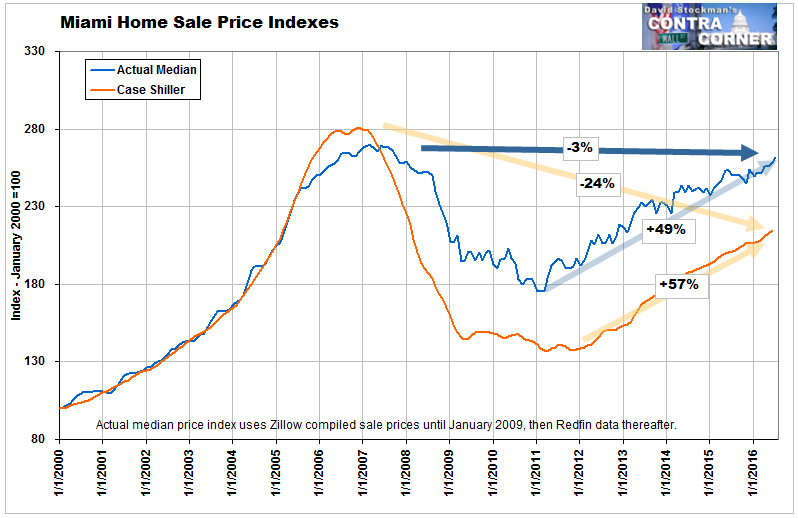 The Miami metro has only seen per capita income growth of around 6% total since 2007. That means that the rebound in house prices has been driven by something other than per capita income. Rising consumer prices have clearly outpaced gains in income, eating into purchasing power. Still, home prices are within 3% of the peak of the greatest housing bubble in history, here in one of the most extreme bubble locations.

I live in and own a home in this market. I also sold a house at the top of the bubble in 2005. While reported prices continued to rise until 2007, sales volume had collapsed by mid 2006.

If you were a seller during the 2006-2007 period, it was difficult to sell at any price, let alone the prices reported at that time. The market essentially froze. The peak prices of 2006-07 gave a false impression. There was really no longer a market. Active market prices actually peaked in 2005. Current prices are above 2005 levels. So I would classify the Miami-Ft. Lauderdale market as in a dangerously inflated bubble state.

The CSI it was concurrent with the price turn at the top of the Great Bubble in that market, but the CSI data releases lagged the beginning of the recovery from the crash by about 6 months. Redfin’s releases in July and August of 2012 showed the first evidence of the rebound. CSI didn’t show it until its December release which reflected August-October sale recordings. By that time the market was already up 18% from the low. It took Robert Shiller another couple of months in 2013 to realize that the market had turned, and he was already warning of another bubble. While correct to do so, he was at least 3 years too early. It’s good to be bearish and cautious, but if you needed to buy a house and wanted to time the market, you might still be waiting. Now it’s too late.

Again, this isn’t just in Miami. It’s typical of how the CSI indexes behave in any market. The question now is if they’ll again be concurrent with the turn as the current cycle tops out. I can only answer, “Maybe.”

The real data that you need to watch for the first sign of the end is sales volume. If demand starts drying up, the end is nigh. By then it may even be too late. Housing markets tend to turn with a vengeance. I remember the market turn in 1979-80 well because I was a young real estate salesman in a micro bubble market in Center City Philadelphia. One day the market was there. And then it wasn’t. One minute we were living high. Three months later, we were starving. So I got a job at McDonalds.

Another market that was in a hyper bubble during the Great Bubble was San Francisco. Case Shiller shows that market to be 5% above the bubble peak while actual median prices are up 6%. 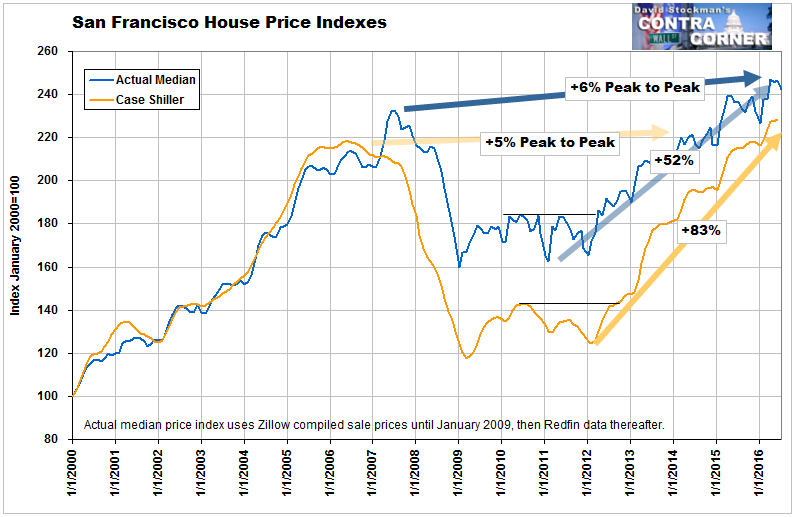 The CSI lagged the turn at the lows in 2012 by 6 months again, but since then it has caught up. San Francisco is just on fire in all types of property. The fact that since 2012 CSI has risen faster than median prices is a sign that the crappier a housing unit in San Francisco is, the faster it’s inflating. This is definitely not an indication of a healthy growing market. It’s a sign that speculation is completely out of control.

The housing price inflation in San Francisco has partly been driven by income gains, which are around 16% total since 2007. Affordability was a hideous problem for most people then. It is almost as bad today. The question in San Francisco is how far they can push the limits this time before the market crashes again. MLS data shows total sales volume for the last 6 months through July down by 10% versus last year. That could be the bell ringing for this cycle.

Last in this review is LA. Comparable market sales data for the  January 2000-2009 period wasn’t available but I found a chart of sales prices published by Trulia and compared that with the Case Shiller data. LA was a super bubble market during the great bubble. The Trulia data shows LA prices to now be 12% higher than at the peak of the great bubble.  Somehow Case Shiller shows prices still down 9% from the bubble peak. Trulia shows prices gaining 111% from the crash low while the CSI is “only” up 56%. 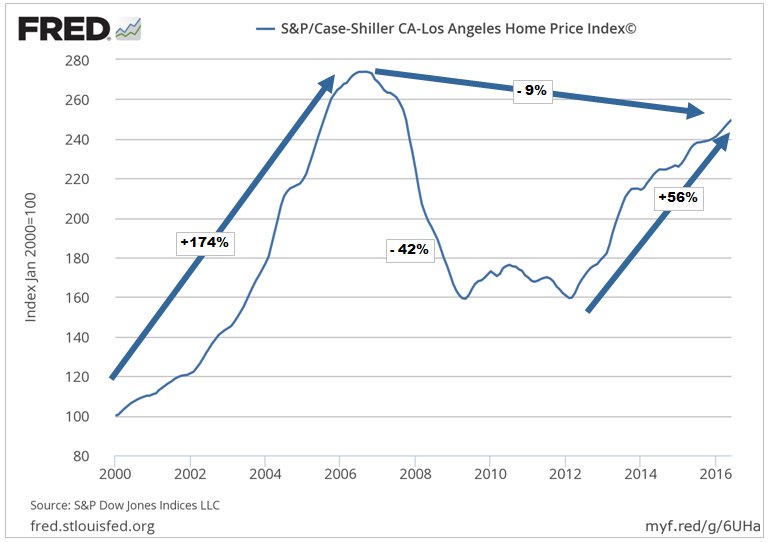 Meanwhile personal income per capita in the LA market is up approximately 17% through 2015. The affordability crisis may be less extreme today in LA, particularly in view of the central bank mortgage rate subsidy. LA has yet to see the volume contraction that San Francisco has. As long as the mortgage subsidy is in place, high prices can persist and maybe even go a little higher in LA. But unless I believed that the mortgage subsidy is permanent and that record low rates will persist indeterminately, this is not a bet I would make.

There are several takeaways overall. One is that Case Shiller is usually misleading during the mid to latter stages of a local bubble and that at best the next downturn in CSI data will be no better than concurrent with the turn in the markets. By the time the price downturns show up in the Case Shiller data or the median home price data, it will almost certainly be too late, because the markets will have already seized up, with few sales taking place.

With prices back into the stratosphere virtually everywhere, affordability is again an issue. The Fed has enabled the return of these bubbles by subsidizing purchases with  via super low mortgage rates. Without this subsidy, home purchases at these levels would not be possible for the vast majority of buyers. Consequently prices would again collapse, mortgages would be under water, and financial institutions would again come under extreme pressure.

It remains to be seen for how much longer the Fed can or will support the appearance of stability. It is playing a dangerous game. Under these conditions It would be prudent to take steps to hedge or protect your assets.