Last week, we learned that vehicle leasing as a percentage of monthly light-vehicle sales hit a record in February at 32.3%.

In other words, a third of the over 1 million cars and light trucks “sold” during the month were leases, according to J.D. Power.

This is indicative of what is now a long-term trend. Have a look at the following chart from WSJ, which shows that since 2009, the share of monthly auto leases as a percentage of vehicle sales well more than tripled: 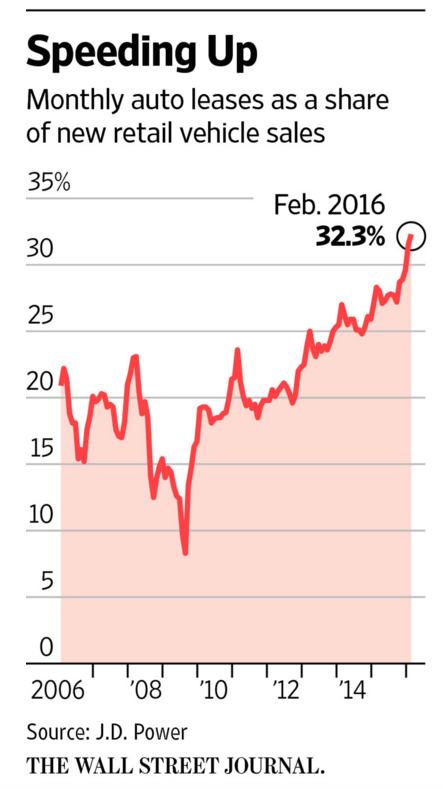 So what does that mean for dealers? Deflation.

And what does that mean for the automakers? Hefty losses.

Nothing about this is hard to understand. You get a supply glut causing pricing assumptions for your existing inventory to prove wildly optimistic and you end up with giant writedowns.

This has happened before. “The auto industry expanded the use of leasing in the mid-1990s, helping to fuel retail sales of new vehicles,” WSJ recounts. “Eventually, a glut of off-lease cars sent resale values down and auto lenders who had bet residuals would remain high ended up racking up billions of dollars in losses, having to sell the cars for much less than they anticipated.”

Right. Nothing difficult to grasp about that. But the especially silly thing about the dynamic with auto leases is that it was the dealers and the automaker-affiliated financing companies that made the leases in the first place. In other words, it’s not like this was some supply shock that couldn’t have been forecast ahead of time. In fact, they knew exactly when the off-lease deluge would start, so it’s not entirely clear why they would have set optimistic residual assumptions.

Anyway, the cracks are already starting to show.

“All else equal, it puts pressure on lease residuals – though we note most fincos had assumed declining used vehicle prices in their lease writing,” Goldman said, earlier today. “Second, while improving inventory acquisition cost for the dealers, it may put downward pressure on the value of existing dealer inventories, which can be negative for used margins.”

Well yes, declining used vehicle prices “may” be a “negative for used margins” – in fact that’s almost a tautology. 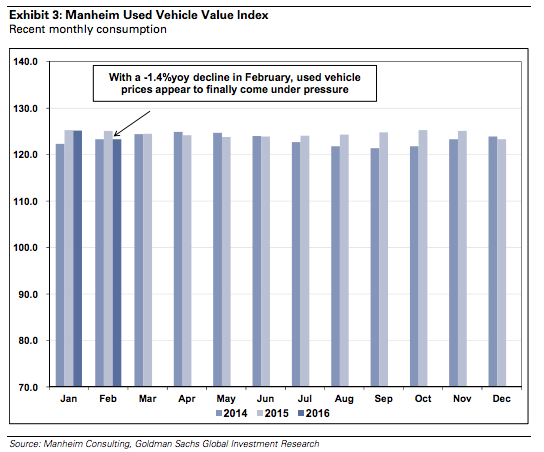 And of course falling used car prices means pressure on new car prices as well, which would be a shock to America’s booming auto market.

Obviously, the scariest part about all of the above is that consumers still have the pedal to the metal (pun fully intended) when it comes to leases, which means there’s no end in sight to the off-leases and thus no way to determine, at this juncture, how big the residual writedown wave and deflationary auto industry calamity will ultimately end up being. 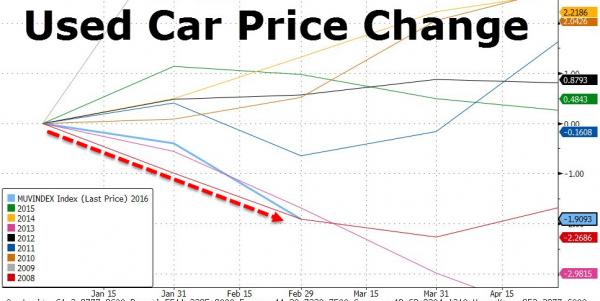