Treasury auction demand has been stable since the last debt ceiling crisis in 2015. Coupled with gradually falling supply, that has kept Treasury yields locked in a tight range. Don’t be fooled by all the media talk about the rise in yields since last month. Yields are still range bound.

They have however, broken a majo downtrend, and have the potential to move higher.

The supply side is about to become very unstable within the next couple of months, first when the Treasury is forced to stop public borrowing, then when the debt ceiling is lifted.

Such a swing would result first in a rally. But it won’t last long because when the Treasury runs out of money, probably in October, it won’t take long for Congress to lift the debt ceiling. The Treasury would then issue a surge of new supply that would depress the market.

When the Fed begins to shrink its balance sheet, that will also bring new supply to the market, because the Treasury will need to raise the funds to pay back the Fed.

The Fed will also no longer be pumping cash into dealer accounts every month, as it has been with its MBS replacement purchases. Those purchases will stop under balance sheet “normalization.” Primary Dealers will have less cash available to absorb even normal levels of supply, let alone the increased supply that will be coming.

Under the circumstances, any rally in bonds would be a selling opportunity.

Primary Dealers are record long in their holdings of Treasuries. They also sharply cut their short futures hedges last month, leaving them little capacity to absorb new supply. Their track record shows that they are most wrong at major turning points in the market. Being record long makes them unable to continue to bid for paper at a pace needed to support rising prices. 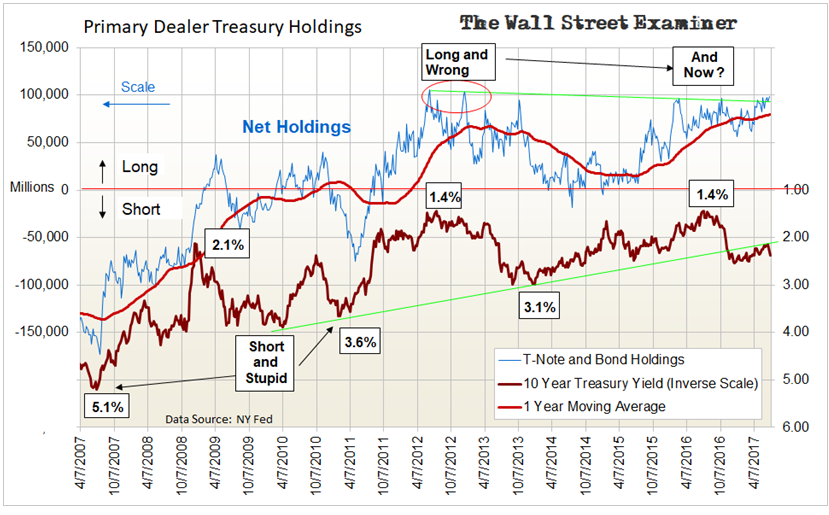 Foreign central banks have been persistent buyers for 9 months. That buying has reached a level where their buying cycle usually peaks and reverses, leading to downtrends often lasting a year or more. That would be another bearish factor if history repeats here.

Conversely, US commercial banks reached record levels of selling in the second quarter. Normally such an oversold reading would have bullish implications but that may not be the case here.

The banks understand better than anyone the meaning of the Fed “normalizing” its balance sheet. “Normalizing” is a euphemism for “draining” or “tightening.” The banks know that there will be less money around, and more supply to be absorbed.

Their selling surge broke a 3 ½ year bullish trend. This could be signaling a bear market. At the very least, the burden of proof is now on the bulls.

Treasury auction demand has been stable since the last debt ceiling crisis. Coupled with gradually falling supply, that’s been enough demand to keep Treasury Yields locked in a range. On a year to year basis, there was a very slight uptick in demand in June. The total bid was $445.5 billion, versus $438.3 billion in June 2016. 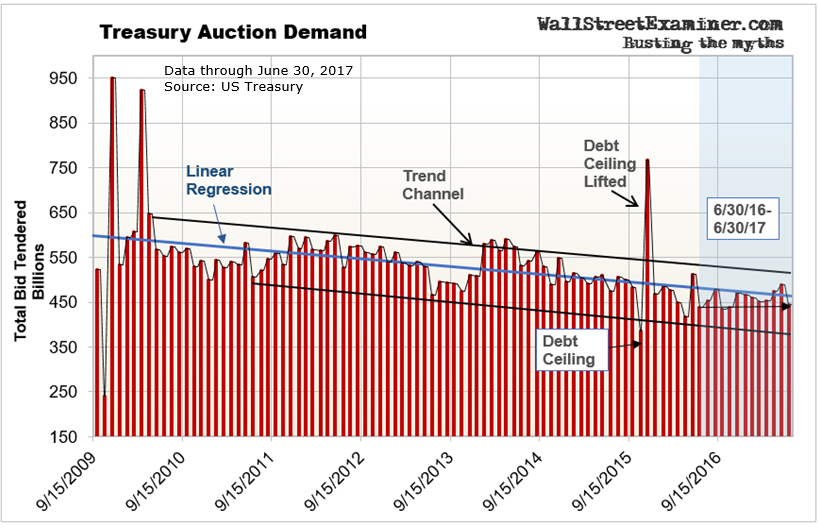 While demand has been stable since late 2015, the long term trend of declining demand is intact, and therefore a bearish factor for the longer term outlook.

The Treasury will run out of cash by October, thanks to the debt ceiling. It will no longer be able to use its cash to pay down its debt to the Social Security Trust Fund and government employee pension funds, as it has been doing for the past several months. Doing that has given the Treasury room under the debt ceiling to issue new debt to the public on its regular schedule. That game will end, most likely in October.

At that point, the Federal debt limit will become a hard limit on the Treasury issuing debt to the public. The restriction of new supply will force market participants to find other places to deploy their cash flow. That would push stock and bond prices up. Yields would fall. But with the Treasury out of cash, the government would soon default on its obligations. Congress will be forced to raise the debt limit to accommodate the new borrowing necessary for the Federal Government to pay its bills.

That means that a substantial increase in new Treasury supply is looming once the debt ceiling is lifted. The Treasury will need to raise funds to pay its bills, rebuild its cash, and repay any internal accounts it raided over the past few months.

If demand does not increase to the same extent as the increase in supply, bonds will sell off and yields will rise.

Our last experience with lifting the debt ceiling teaches us to expect that. Due to pent-up demand, buying did increase sharply as supply returned to the market. But it was not enough to prevent a big selloff.

Stock prices should also sell off. That could be the starting gun for the next bear market. That’s essentially a matter for technical analysis, which I cover in my weekly market updates. In that respect, the market is looking increasingly ripe for such a turn.