In the midst of a gloomy earnings season, the share buyback machine has remained in overdrive, and some experts are cautioning it will all end badly.

Companies, even those that are missing profit and sales estimates and cutting outlooks, or restructuring and cutting jobs, are still announcing buybacks. Coming after a long period of intensive spending on shareholder returns, the news is bad for investors hoping to see a return to growth.

“We continue to be skeptical about how companies are deploying capital, especially when it’s tied to stock-based compensation,” said Ben Silverman, vice president of research at InsiderScore, a research firm that tracks buybacks and legal insider trading for institutional clients. “We believe buybacks can be used to mask management’s inability to grow the business and be innovative thinkers.”

William Lazonick, professor of economics at University of Massachusetts Lowell and director of the Center for Industrial Competitiveness., went a step further, suggesting that buybacks have the potential to push the U.S. into recession. He argues that companies are using them to prop up share prices at the expense of reinvesting in the business and supporting job stability and long-term growth.

“It has the potential to really drive the economy into the ground,” he said. “Companies have given away so much money, it’s been a long-run secular problem that has contributed to why income is so concentrated at the top.”

Data shows that 78% of the total compensation paid to executives at the top 500 U.S. companies in 2014 went on stock options and stock awards, he said. “Executives are basically incentivized and rewarded for getting the stock up, and buybacks are a prime way of doing that,” he said.

The emergence of aggressive activist hedge funds has exacerbated the problem, as they deliberately target companies with strong cash flow that can be strong-armed into distributing those funds.

Many activist shareholders, including billionaire investor Carl Icahn, have pushed companies to return more of the cash they hold to shareholders through share buybacks. The idea is that buybacks boost earnings per share by reducing the number of outstanding shares, and the additional buying can raise the share price. However, It doesn’t always work out that way.

For example, GoPro Inc. GPRO, +8.17% said late Wednesday that it spent $35.6 million to buy back stock during the fourth quarter, at an average price of $23.05, but to little avail.

The company still reported a surprise fourth-quarter loss, and provided a dismal first-quarter sales outlook. And the stock ended the fourth-quarter $18.01, which was 22% below the average price the company paid to buy them back. 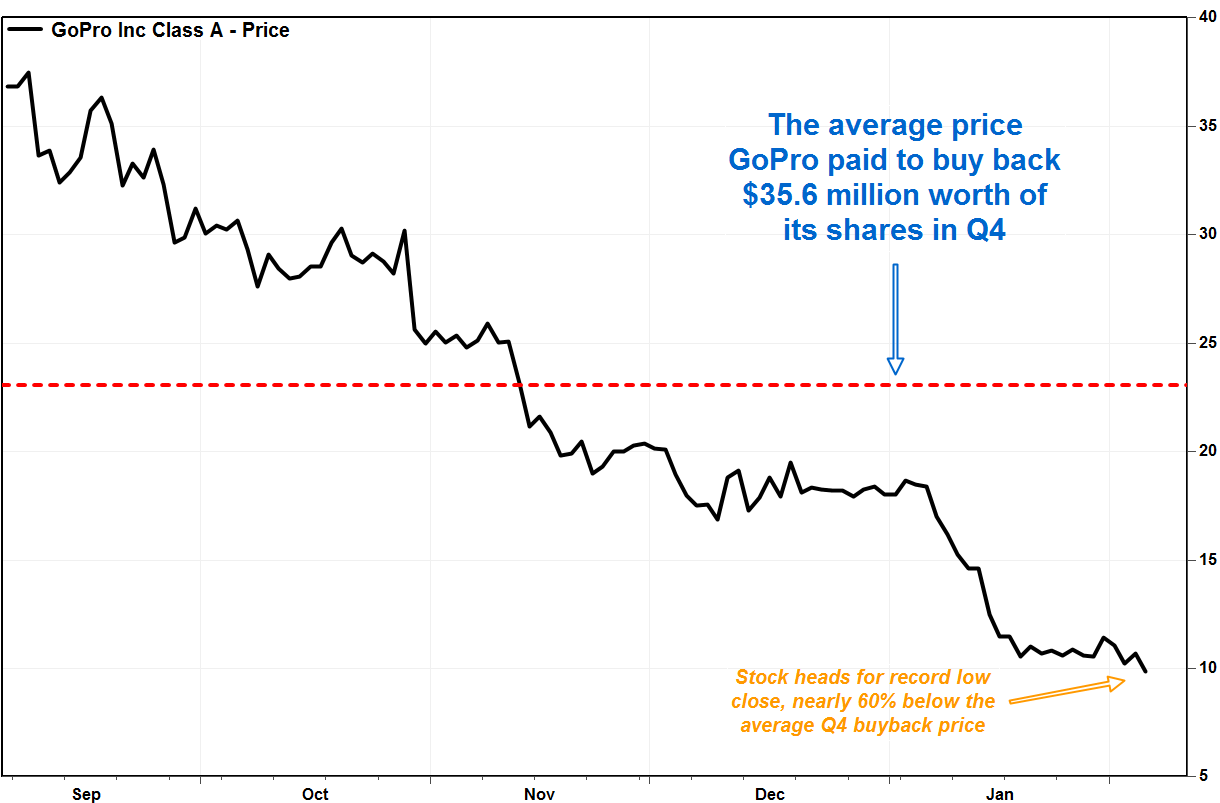 On Thursday, it tumbled 8.5%, toward a record closing low, that was nearly 60% below what the company paid just a few months ago.

“I always caution retail investors to not get too excited about buybacks, because what are they doing?” Silverman said. “If the stock price is not increasing, they’re just repatriating capital without getting additional value from it.”

Shareholder returns in the form of dividends and buybacks hit a record $245.7 billion in the third quarter, according to a report Thursday from Arance (Investment Research), up 4.9% from the year earlier period. On a trailing 12-month basis, returns to shareholders stood at a record $934.8 billion in the quarter, beating the previous record of $923.3 billion set in the second quarter of 2015.

“The trend is expected to continue to reach another record figure of $950 billion for 2015 and may likely touch the trillion-dollar mark,” said Aranca. 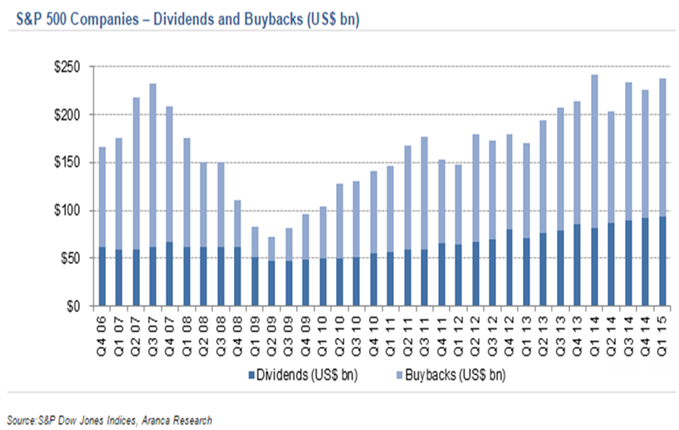 Companies that spent large sums on buybacks in the December quarter may be wishing they had waited, given the massive across-the-board selloff in January.

“It does appear to be ill-timed,” said Silverman. “Companies as a group bought into strength, rather than weakness.”

A good example of this has been Apple Inc. AAPL, -1.56% The technology giant repurchased 281.12 million shares in open-market transactions over the past five quarters, at a weighted average price of $117.48, according to an analysis of data provided in the company’s latest quarterly filing. 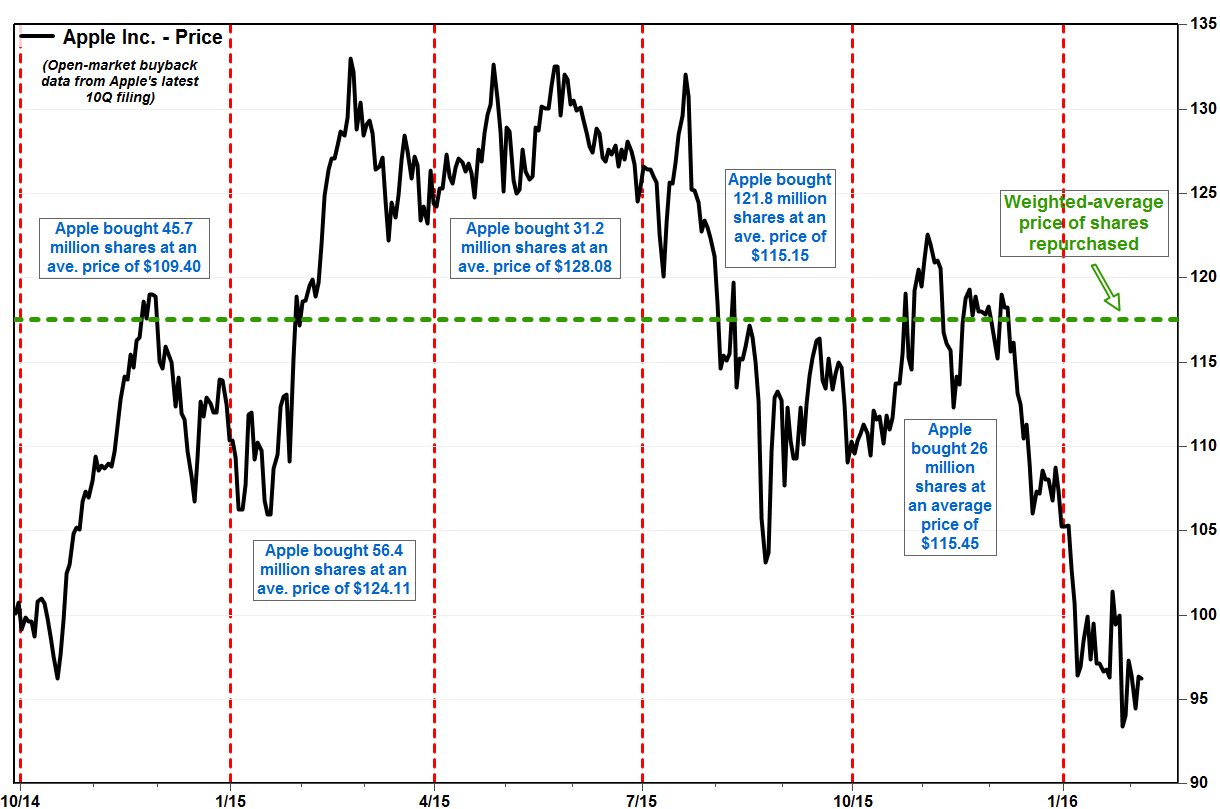 The stock was trading at $96.60 in afternoon trade Thursday, or 18% below the average price the company paid.

“It behooves people not to look at buybacks as some kind of magic bullet to put a floor under the stock,” Silverman said. “At the end of the day, the market will typically reward companies that run their businesses well.”