Can Consumers Carry US Economy While Business Prepares For A Storm?

Real Core Durable Good Orders (all orders except transportation equipment and defense capital goods) rose by 1.5% year to year in March. That was the actual, not seasonally adjusted number (NSA), but adjusted for inflation.

When we break down the components on a “real” inflation adjusted basis, which gives us an idea of the actual volume of new orders, the picture becomes more problematic.

The headline seasonally adjusted (SA) number for total new durable goods orders rose by 4% month to month. As the SA number so often does, this clearly overstated the actual increase in business. The media was loaded for bear however, quick to point out that non-defense non-aircraft capital goods orders fell by 0.5% on a seasonally adjusted month to month basis. That probably overstated any weakness in the broader economy, but there is a very real conflict in terms of the actual volume of orders which we see in the inflation adjusted actual NSA data.

A more comprehensive measure than the narrow non-defense non-aircraft capital goods includes consumer durables, whereas capital goods do not. It is uptrending weakly in the short run but downtrending in the long run as the US economy gets hollowed out. 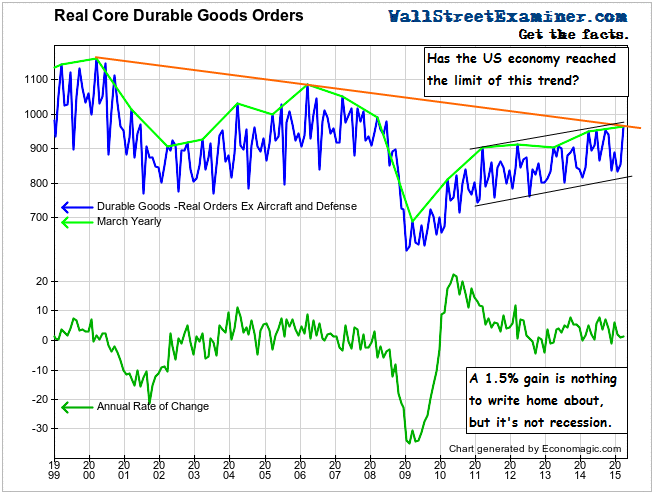 Cutting through the mainstream media propaganda confusion, misreporting, and misinterpretation, here’s the takeaway. Real core durable goods are still growing at a very slow pace. They have reached the limit of the long term downtrend. A technical analyst would say that they have reached long term resistance. A technical chart trader might institute a pilot short position at this point, expecting this measure to roll over as time and trend suggest.

Another takeaway is that the trend decelerated sharply over the last 5 years in which either QE or ZIRP, or both, have been in force. They have had no effect in boosting this broad measure of the economy, with a growth rate no greater than that of the recovery of 2003-2006. 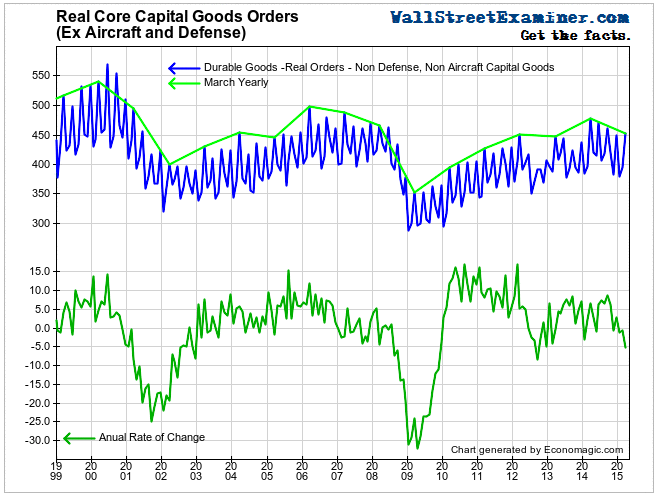 March is always a very strong month in this measure. March was up 14.6% month to month, but that compares with the 10 year average of +18.1% and the March 2014 increase of 20.3%. The current reading is a sharp deceleration of the trend. Like the broader measure which includes consumer durables, the capital goods measure is also in a long term downtrend.

Mainstream pundits like to repeat the mantra that consumers drive the US economy. Comparing these two measures suggests that the conventional wisdom is about to be put to the test. While consumers continue to spend, business has apparently already battened down the hatches for a storm. The question becomes whether the consumer will cave, or business will come around to a more optimistic view.

I’ll go with the conventional wisdom, “The trend is your friend,” in this case the longer term secular trend decline. The consumer has been carrying the load with little increase in real purchasing power for a long time. Without a sustained and meaningful increase in consumer purchasing power, the long term trend is likely to prevail.