By Scott Martin at the Wall Street Journal

Venture-capital investors hit the brakes on investing in the first quarter, following a funding bonanza the past two years that pushed valuations of once-hot technology startups to soaring heights.

Funding for U.S. startups fell 25% from the fourth quarter to $13.9 billion, the largest quarterly decline on record since the dot-com bust, according to data from Dow Jones VentureSource. The numbers of deals also hit a four-year low of 884.

The drop threatens to hasten a slump rippling through Silicon Valley that is pushing startups to slash marketing budgets, lay off staff and dial back lofty ambitions. Investors such as mutual funds and big banks that pumped money into startups on the promise of big returns have since retrenched, as a punishing market for initial public offerings has spoiled the runaway optimism.

The sky-high valuations of last year have retreated as a result. In the first quarter, the median value of U.S. startups plummeted to $18.5 million after hitting a peak of $61.5 million in last year’s third quarter.

“I think investors are nervous, sitting on the sidelines waiting to see what happens,” saidBrian Mulvey, co-founder and managing partner at PeakSpan Capital, which recently raised a venture fund of $150 million.

Investors caution the first-quarter data spans a relatively small period and that capital tends to fluctuate widely throughout the year. VentureSource counts funding rounds for U.S.-based companies with at least one venture-capital firm as an investor. It doesn’t include startups only backed by individuals or majority-owned by corporations or private-equity firms. Several other data providers with varying methodologies show less of a decline. 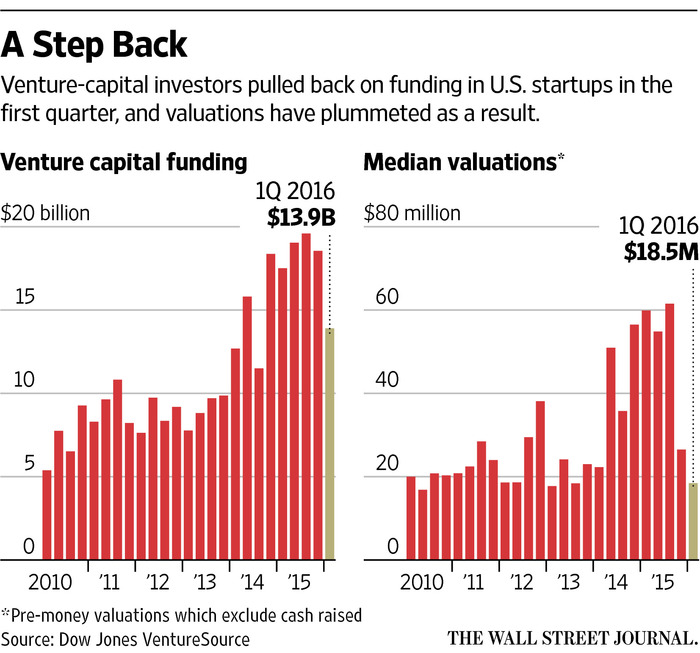 Still, many startups are struggling to raise capital at higher valuations, especially companies in competitive areas that require large budgets to outduel rivals.

On-demand food-delivery service DoorDash Inc. had been seeking a large valuation uptick in its latest financing round, but was instead forced to sell its shares in February at a 16% discount to its price last March. Location-sharing mobile-app maker Foursquare Inc. had its valuation shaved 69% in a financing round in January, corporate documents show.

Others startups, such as meal-delivery service SpoonRocket Inc., weren’t as lucky and went belly up. The company called it quits in March after raising $13.5 million in funding.

“Good idea, but food is hard,” said David Fialkow, a managing director at SpoonRocket investor General Catalyst Partners, adding that the business was liked by customers but it was hard to make money.

Another startup, Shuddle Inc., a ride-hailing service for children, said Thursday it isshutting down operations after failing to raise more venture capital.

Investors were swooning over the success of ride-hailing service Uber Technologies Inc., funding just about any business that turned a smartphone into a remote control mechanism to order goods and services. Optimism waned after few such firms demonstrated they could operate profitably. Funding to consumer services companies, which include the myriad of on-demand apps, spiraled 63% from the fourth quarter, according to VentureSource.

“A year or year-and-a-half ago, on-demand [service] was going crazy,” said Rafael Corrales, a general partner at Charles River Ventures. “Now no one wants to touch them.”

The growing pains aren’t limited to services for consumers. Database developer Couchbase Inc., for instance, took in $30 million in financing in the quarter that pinched its valuation 40.7%. Couchbase declined to comment.

A frozen IPO market for new tech issues in the first quarter has posed problems. Not a single venture-backed tech company went public in the first quarter, the first time that has happened in the past seven years. The darkening mood in the public markets, through which venture capitalists cash in their investments via IPOs, is forcing them to acknowledge that private market valuations got out of hand.

“There’s a general sentiment among VCs that there are fewer opportunities for exits with the IPO market pulling back and larger companies doing significantly less acquisitions,” said Wesley Chan, managing director at Felicis Ventures.

Public-stock trading also continued to dog investor prospects for companies in some sectors whose valuation multiples track public peers. The Nasdaq Stock Market was clawing back in the quarter from steep declines over concerns about global economic uncertainty and China in particular. Salesforce Inc.’s stock took a dive in January, casting a pall across cloud-services startups, and its shares are only now regaining ground.

The cooling funding period arrives after investors stepped up the pace in 2015, investing about $75 billion in startups, the most on record since 2000 when about $94 billion was raised.

To be sure, funding for information technology—companies that develop computer hardware, networking and software—fared better than other sectors, rising 3% from the fourth quarter. Another bright point was biopharmaceutical startups, which gained 7% more funding in the quarter. Biotech investors’ prospects were buoyed by the fact that the sector managed six venture-backed U.S. IPOs in the first quarter in an otherwise unreceptive market.