Capitulation Day——Time For Bullard To Call For QE Restart

“Capitulation,” that’s what I heard a lot today. “Stocks have hit bottom,” was next.

Last time there was a real case of “capitulation” was in March 2009 when the S&P 500 had been cut nearly in half. Today, the market is just a tad shy of it. But it was a chaotic day of alternating panic selling, forced selling, and panic dip-buying. And the dip buyers got their fingers burned.

The Dow had one heck of a ride from being down 1,000 points at the open to shooting up 500 points in minutes, working back toward the green before losing its grip. It ended the day down 3.6%, at 15,871. November 2013 was the first time it had hit that level. So folks are rediscovering the nerve-rattling possibility of losing money in the stock market.

The Nasdaq, after a vertigo-inducing 400-point plunge, shot back up into the green, then plunged again, and ended the day down 3.8% or 180 points.

This chart by Doug Short of Advisor Perspectives shows the increasing intensity of the turmoil of the last five trading days during which the S&P 500 plunged 10%. Volume soared and ended today at 114% above its 50-day moving average. Maybe that’s why some folks called it “capitulaltion”: 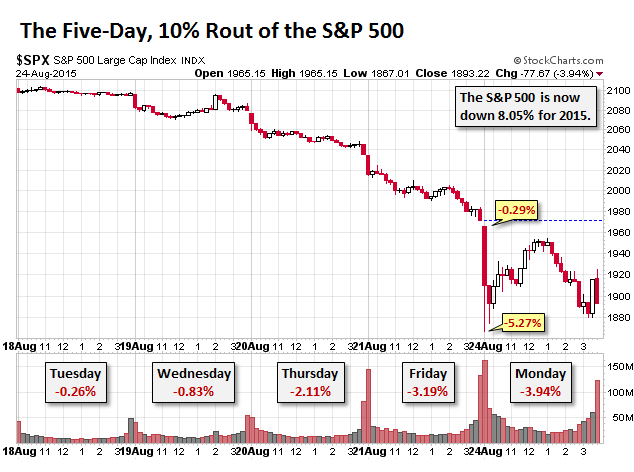 Retail investors suddenly woke up to this scenario.

After years of making money the easy way, they’d been lulled into a false sense of security as every minor downtick was immediately followed by a rally. Already rattled from last week’s selloff, they tried to log on to their brokerage accounts to do some panic selling of their own, and they did it in such numbers that some had trouble logging on and executing trades, the Wall Street Journal reported, naming two online brokers specifically, Scottrade and TD Ameritrade.

Many stocks got totally hammered: 1,322 stocks on the NYSE and 765 stocks on the Nasdaq hit new 52 week intraday lows, 2,087 stocks in total, including Apple, which had plunged 10% before CEO Tim Cook ingeniously sent an email to Jim Cramer, telling him that everything was hunky-dory in China, where Apple gets a big part of its business. And Apple shares jumped.

It was that kind of day. Chaos, yes. Murky dealings, yes. Bloodied dip buyers, yes. Capitulation, not so much. However, we’re expecting a rally topped off by a majestic short squeeze in the near future.

$1.8 Trillion in US Household Wealth Evaporated

No telling how many trillions of dollars the global stock market rout has sent back from where they’d come: the ether. But Steve Goldstein, D.C. bureau chief of MarketWatch, tried to do “some back-of-the-envelope math” to figure out how many trillions evaporated in the US, given that households and nonprofits held $24.1 trillion in stocks as of March 31, according to Federal Reserve data. And he found that, through mid-morning, “a cool $1.8 trillion” in US household wealth had evaporated, most of over the past five trading days.

“This will probably be the worst quarter for stock-market destruction since the third quarter of 2011, when $2.8 trillion was wiped away,” he wrote. That was during the last correction that ended when the Fed buckled under Wall Street’s pressure as the S&P 500 was down 19%, and stepped back into the fray and pumped up the markets with more QE.

Back then, the turnaround point wasn’t capitulation. It was the Fed.

This is usually the point in a selloff when you’d expect St. Louis Fed President James Bullard to come out of the woodwork, get on Bloomberg TV, and muse about inflation and jobs and emerging markets or whatever. “These are important consideration for a central bank,” he would normally say at this point in the stock market rout, adding, “And for that reason I think that a logical policy response at this juncture may be to restart QE.”

Bullard pulled this sort of feat off successfully in October 2014, using similar words about “delaying” the end of QE, after the S&P 500 had dropped 7.4%, and folks were fretting at the time about a free-fall. That day, Bullard became a one-man stock-market manipulation miracle. Markets instantly turned around.

And now, Wall Street is clamoring for a repeat performance. But Bullard must have caught some heat from the powers that be because he – and other Fed heads – have remained stubbornly silent about restarting QE, though that’s what everyone wanted to hear, but they talked about everything else that no one wanted to hear.

Energy stocks have gotten eviscerated. Natural gas drillers have been hit the hardest. One is already in bankruptcy. A much larger one is finalizing a prepackaged bankruptcy filing. And now the bonds of Chesapeake, the second largest natural gas driller in the US, after Exxon, are plunging. Read… Whose Capital Is Getting Destroyed in US Natural Gas?