Carnage In The Junk Pits—-2015 In Review

When the word ‘bloodbath’ just doesn’t quite sum it up, distressed debt investors’s bonuses have been obliterated in 2015. Despite seeking safety away from oil and coal companies, one trader exclaimed, the pain is “like cancer, it’s spreading throughout the body,” as every industry from materials to retail and industrials has collapsed… though, as Bloomberg reports, some investments stood out in their awfulness.

Since the peak last August, Distressed Debt Hedge funds have lost over 8% – its worst since the financial crisis… What happens next?

But, as Michael Carley, the former co-head of distressed debt at UBS Group AG who is a co-founder of hedge-fund firm Lutetium Capital LLC. “If you look at all the segments in high-yield — chemicals, metals and mining, utilities, retail, health care — they’re all impacted.”

Of course, as Bloomberg details, some investments stood out in their awfulness.  Here’s a look at the worst of the worst… 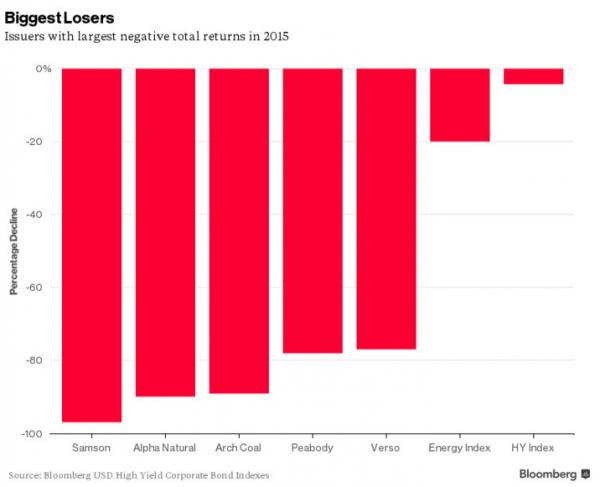 What went so wrong for these companies?

The bankrupt KKR & Co.-owned oil and natural gas producer issued $2.25 billion of senior unsecured notes at near par in July 2014, and 11 months later they were virtually worthless. The Tulsa, Oklahoma-based company loaded up on debt following KKR’s 2011 leveraged buyout, which added $3.8 billion in obligations to its books. Now, Samson Resources Corp. creditors — including Oaktree Capital Group LLC, Blackstone Group LP and Cerberus Capital Management LP — are fighting over who will gain control of the company and at what price. The question they face is whether continued low oil prices have mortally wounded the business or if there’s a rebound in the offing.

The Bristol, Virginia-based coal producer, which filed for bankruptcy in August, spent much of the year battling to get its nearly $4.5 billion debt load under control. Alpha Natural Resources Inc. struggled as the price of coal fell to its lowest level in a decade with many utilities switching to natural gas. The company’s financial troubles stem from its 2011 decision to lever up so it could buy Massey Energy Co. for $7.1 billion. Alpha has since closed three mines and cut staffing at two others as part of its restructuring plan.

The St. Louis-based miner has suffered through the same difficult economic conditions as Alpha Natural. It skipped an interest payment last week and entered a 30-day grace period, at the end of which it would file for bankruptcy if it doesn’t pay up. Arch Coal Inc. was nearly delisted by the New York Stock Exchange in August before it completed at 1-for-10 reverse stock split. The company still needs to submit a plan showing that it can get its market capitalization above an average of $50 million for 30 consecutive trading days or it will be kicked off the exchange. Its market capitalization currently is $19.8 million.

The largest U.S. coal miner by volume also struggled with soft demand and is looking to cut the nearly $6.8 billion of borrowings on its books. Peabody Energy Corp. shares fell 93 percent in 2015 and closed trading at $8.49 on Tuesday. The St. Louis-based company agreed to sell its operations in New Mexico and Colorado and is in talks to raise new debt secured by some of its Australian assets and to exchange its 6 percent senior notes due in 2018.

The highly leveraged Apollo Global Management LLC-backed paper maker was the only non-energy-related company to crack the top five biggest losers of the year. The Memphis, Tennessee-based company is facing shrinking demand for its products in an age of Kindles and iPads. It also has struggled with its debt load, and even the $1.4 billion acquisition of rival NewPage in January, which was supposed to provide relief, didn’t stop its slide. Verso Corp.’s 2019 first-lien secured bonds, which sold for as much as 98 cents on the dollar in March, last traded at 15 cents on Dec. 15. And its shares are trading for less than 1 cent. 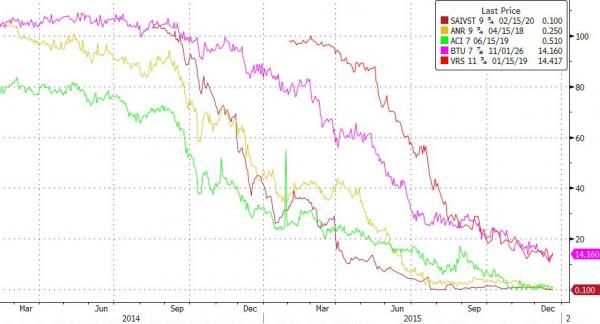 As we noted previously, for the first time ever, primary dealers’ corporate bond inventories have turned unprecedentedly negative. While in the short-term Goldman believes this inventory drawdown is probably a by-product of strong customer demand, they are far more cautious longer-term, warning that the “usual suspects” are not sufficient to account for the striking magnitude of inventory declines… and are increasingly of the view that “the tide is going out” on corporate bond market liquidity implying wider spreads and thus higher costs of funding to compensate for the reduction is risk-taking capacity.

One wonders when stock investors will wake up again? 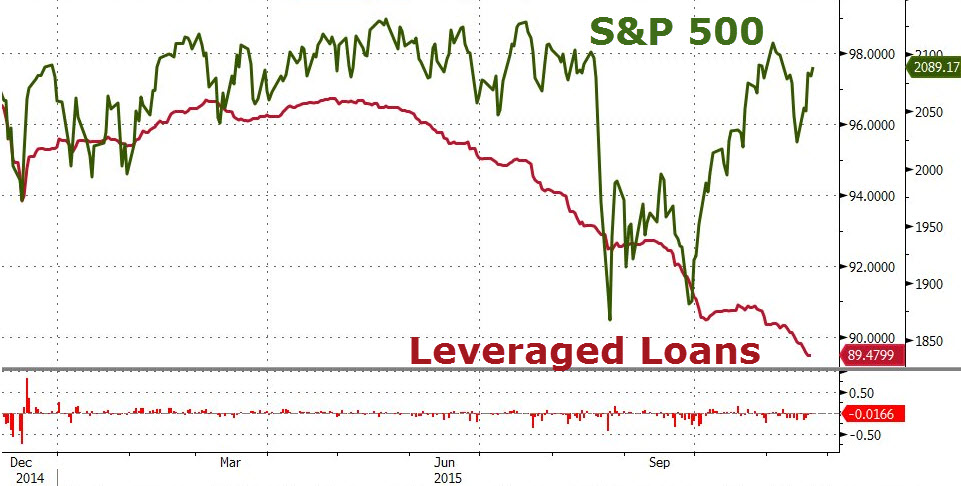 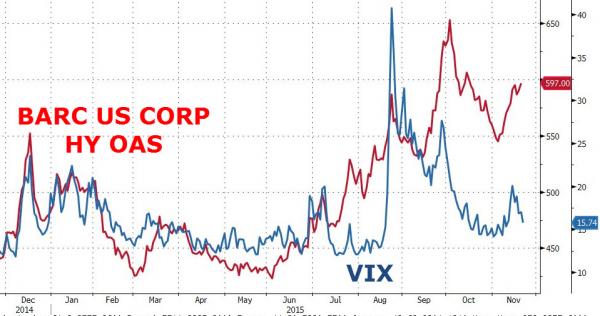 Source: These Are the Junk Bond Trades That “Obliterated” Traders in 2015 – ZeroHedge