The last time the Obama Administration ran the Treasury Department this time of year, the Federal government issued $232.5 billion in net new supply during the period of January 20-March 15. That’s a huge number, but it’s completely typical for that time window, when new debt issuance has typically run $200-$300 billion. The government needs a lot of cash during that time frame because it is sending out the largest chunk of tax refunds. People who are due refunds tend to file earlier, and February is the biggest month for refund checks to go out.

At the same time, the government isn’t bringing in much cash either. The next big tax payments aren’t due until March 15, the due date for year end corporate taxes. Tax collections in February are always light. There are no quarterly tax due dates in February. So every year the government needs to borrow a lot of money between the third week of January and mid March.

Over the past 2 years, the Treasury raised a cash kitty that went over $440 billion at one point last October. It had done so in the process of creating a “rainy day fund,” a contingency fund for any unforeseeable “emergencies” that might arise.

The real approaching emergency is a known one, the re-imposition of the Federal Debt ceiling on March 15. This has always been known, so the government actually raised this “rainy day fund” in preparation for the day that it knew the rains and the flooding would come. It built a cash ark and filled it with enough money to last for 40 days and 40 nights. Actually it would have lasted about 6 months at the rate at which the Federal deficit had been accruing.

But then came this January and the advent of the Trumpists taking the helm of Lew’s Ark. Something big had changed. In the January 20-March 15 period, instead of raising lots of cash as usual, the Treasury is raising zero new cash. In fact, it is actually paying down about $3 billion in outstanding debt over that time. That’s unheard of for the late January to mid March time period. Instead of sucking $200-300 billion out of the accounts, of dealers, investors, and foreign sovereign accounts, the Treasury is putting $3 billion back into them.

Here’s why this matters to the market. Every month, the financial markets must typically absorb new Treasury supply. The amounts vary. In months where big quarterly or annual tax collections come in, there’s typically no new Treasury supply. Markets usually get a boost in those months because the Treasury actually pays down debt that month. That money stuffs the pockets of the holders of the expiring paper, and they then go on a buying binge in the secondary markets. So we often get rallies in December, January, March, and particularly mid April to early May.

In the rest of the months, new supply is typically $50-100 billion. That’s a known. Dealers, institutions, foreign governments, and investors who typically buy that paper are prepared to fund the purchases well in advance. The Treasury Borrowing Advisory Committee (TBAC) posts a schedule of estimated offerings twice each month for that purpose. The players are prepared to buy the new paper either through current cash flows or by liquidating other securities, including both bonds and stocks. The new Treasury issuance exerts supply pressure, and there must be enough demand to absorb all of the new supply, or prices will come down.

Over the past 8 years, central banks, including the Fed, ECB, and BoJ, have continually created enough cash to fuel enough demand to keep prices rising. They have done that through their own direct purchases of Treasuries, or through the purchases of other paper. When they buy any kind of paper from the Primary Dealers or other banks, they pay for them by crediting them with cash deposits for the amounts of the purchases. The dealers can then use that cash to buy whatever they want. Stocks are usually the biggest target, but bonds also get their share.  That cash flows out into the entire financial pool so that it fuels rising prices of not only bonds, but also stocks.

Over the past 6 weeks, the Trumpists added a couple of hundred billion in cash to that usual worldwide cash kitty. It did so by withholding the typical amount of supply of $200-300 billion that normally would have hit the market and put downward pressure on prices. The Treasury was able to refrain from issuing some $200 billion or more of new debt because the Obama Administration had handed over more than $300 billion in (Treasury Secretary) Lew’s cash ark. The size of the fund was of truly biblical proportions. Prior to 2014 when the government started accumulating this fund, the Treasury’s cash account was typically between $50-100 billion.

Having watched these cash flows for many years, I had ruminated that Trump might spend this cash exactly as he has, to boost the stock and bond markets. Trump is all about managing the appearance of reality. He’s very good at it, up to a point. But facts have a habit of catching up with his profusion of distractions, digressions, misdirection plays, and misrepresentations.

In terms of Federal finances and market supply and demand he can only play his reality show games for so long. By spending down this cash he has pointed us toward a “Come to Jesus” moment.  That’s because by spending down Lew’s Ark fund, we will reach a moment where the government runs out of cash. It will eventually need to resume borrowing.

There will be lots of theatrics around the debt ceiling. The suspension of government debt issuance for a time could even be bullish. It will stop Treasury supply from being placed on the market. That could come some time in May or June if Trump continues to play games plowing this cash into the markets the way he has since Day 1.

Once the debt deal is done, the price must be paid. The government will resume hitting the market with new supply. At first there will be a lot of it, to replenish government coffers. That’s when the chaos could really begin. We don’t know exactly when, but we know that it’s coming later this year.

The big question then will be whether there’s enough demand at that point and after, to fund all the new Treasury supply. There’s some indication now that there won’t be. Demand for Treasuries has been steadily falling since 2009. We know that from keeping tabs on the total amount bid at each coupon auction for the past 8 years since the peak of the financial crisis. As supply has gradually fallen, so has demand. Rather than remaining steady through the sharp reduction of supply in recent weeks, demand has also plunged. The market’s desire to absorb heavy new supply is likely to be limited. 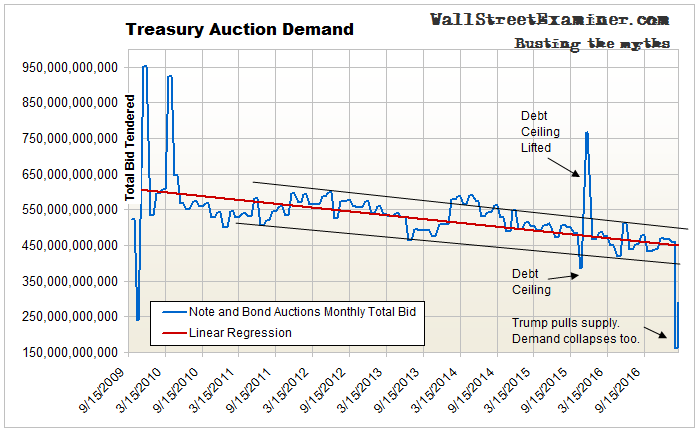 If the economy doesn’t grow enough to generate more new tax revenue, an increase in Treasury supply will be a huge problem. The government’s need to raise money through new debt offerings will grow. New supply will pressure the markets in the context of a long term downtrend in demand for Treasuries. This will also precipitate political crisis.  No doubt this is the Trumpists’ intention. There will be no ark to rescue us from the flood then.