Cash Floods Back Into Reserves And Other Banking Facts That Matter

The apparent shrinkage of the monetary base has gotten attention from some pundits lately. I have warned that the apparent shrinkage was really a shell game that flows from the way the economic priesthood defines reserves, not in any real change in the excessive quantity of money that has driven the stock and bond market bubbles.

There are 2 other line items in this shell game. The Fed offers Term Deposits from time to time. These are typically 7 day duration deposits. When there’s what’s called a Term Deposit Facility offering, again money is simply shifted from reserve deposits, which are just like your checking account at the Fed, to these short term deposits which are like savings accounts or very short term CDs. Again, these term deposits are excluded from the definition of reserves. But the money never went away. It’s just stashed under a different line item that isn’t counted as reserves or as part of the monetary base.

Finally, there’s another line item on the liability side of the Fed’s balance sheet called Reverse Repos, or RRPs. RRPs are overnight money which banks and money market funds “lend” to the Fed, instead of holding them as deposits at the Fed as they normally would. This is a distinction without a difference. To the banks, there’s no practical difference between a deposit and an overnight RRP. But the Fed and economists exclude these RRPs from the definitions of reserves and monetary base. It’s semantics. The money is still essentially immediately available. And there are still multiples too much of it in the system, fueling asset bubbles.

The apparent decline in the monetary base over the past 2 years was driven by shifts from two line items on the Fed’s balance sheet, not by any real shrinkage of money. First there was a massive buildup of the Treasury’s cash at the Fed as it sold more debt than it needed to from 2014 until late 2016. When investors and dealers bought the debt, that cash came from their bank accounts, moving from reserve deposits to Treasury deposits on the Fed’s balance sheet. By definition, the monetary base shrank, but in reality, all the money was still there, ready to circulate at a moment’s notice.

Secondly, year end institutional window dressing at the end of 2016 saw a massive movement of cash from reserve deposits to RRP on the Fed’s balance sheet. Holding Fed RRPs supposedly makes the balance sheets of the banks and MMFs look better to investors. So at the end of each quarter, and particularly at year end, institutions move large quantities of cash from reserve deposits into RRPs. The money then comes out of the RRPs after the quarter ends as fast as it went in.

Over the past 5 weeks, cash was pulled back out of the RRP accounts and back into regular reserve deposit accounts. Money can move around on the Fed’s balance sheet, but it can never leave, at least until the Fed starts peeling off the Treasury notes, bonds, and MBS it acquired on the asset side of the balance sheet. As long as the Fed holds those assets, the Fed’s liabilities, such as deposits and RRPs, must essentially equal the amount of assets held. So there will never really be any change in the amount of money available in the system as a whole until the Fed starts reducing the size of its balance sheet.

Regular bank reserve deposits, called “Other deposits held by depository institutions” rose by $239 billion in the January 4-February 8 period. Whoa! Where’d all that cash come from? Nowhere. It was always on the Fed’s balance sheet as a short term liability just like reserve deposits, but stashed away, hidden in plain sight in RRPs and the US Treasury account. 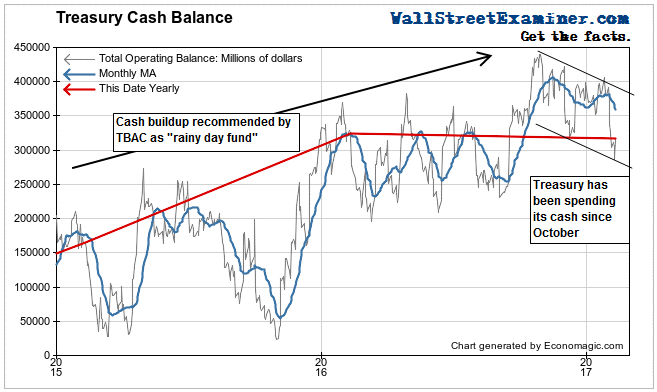 After spending down that cash pile for a couple of months, for the first time in a couple of years the Treasury now holds less cash in its deposit account at the Fed than it did on the same date the year before. The debt ceiling returns on March 16, when the level of debt will be frozen at the level on that day. Had the government held onto all its cash, it would have had approximately 8 months after the debt ceiling was reinstituted until it ran out of cash, assuming no change in the economy or budget policy. With 2 months of heavy spending over December and January, the grace period has been reduced to 6 months. If the Administration keeps spending the way it did in January, the day of reckoning will come sooner.

Meanwhile, on the Fed’s weekly consolidated aggregate commercial bank balance sheet data, rapid debt creation had been the hallmark of 2014 to mid 2016. Lately, weekly measures of bank debt show a dramatic slowing in the growth rate. At the same time, a measure of total real business investment has been stalled since 2014.

Measures of all different types of bank debt have slammed on the brakes since the third quarter of 2016. We don’t know why, but we do know that if it continues it means that the bubble economy, which has been weak in the first place, is probably grinding to a halt and heading for recession. We have seen similar indications in the real time federal tax collections data.

This report is derived from the Wall Street Examiner Pro Trader monthly banking report where I cover all the details of the key changes in the Fed’s balance sheet and the Fed’s weekly consolidated commercial bank balance sheet data.