For the first time in its country’s history, Portugal sold 6 month T-bills at a negative yield. The 300 million euros ($333 million) worth of bills due in November 2015 sold at an average yield of minus 0.002%. A negative yield means investors buying these securities will get back less money from the government than they paid when the debt matures.

To put this in perspective, the 10 year note in Portugal now yields just 2.38%, down from 18% a mere three years ago. Back in 2012, creditors grew wary of the countries referred to as PIIG’s (Portugal, Ireland, Italy and Greece) and their ability to pay back the massive amounts of outstanding debt. Consequently, creditors drove interest rates dramatically higher to reflect the added risk of potential defaults.

If a person had fallen into a deep slumber in the midst of the 2012 Eurozone debt crisis and awoke a week ago, they may make some reasonable assumptions as to why there was a collapse of Portuguese bond yields on the long end of the yield curve; and even displayed negative yields on the short end.

Perhaps Portugal had finally balanced their budget? Or even is now enjoying a budget surplus? To the contrary, that is not even close to the truth. Portugal has not balanced its budget…its budget deficit now sits at over 3% of GDP.

Or perhaps there was a massive restructuring of outstanding debt? Upon joining the Euro, Portuguese national debt was below the 60% limit set by the Maastricht Treaty criteria. By the start of the debt crisis in 2009, that level of public sector debt had edged up to 70% of GDP. However, the recession of 2009-12, saw a rapid increase in the level of debt. Despite recent efforts to reduce public spending and austerity measures pursued by the government, Portugal still has an immense and growing debt load, with a current National Debt to GDP ratio of over 130%. 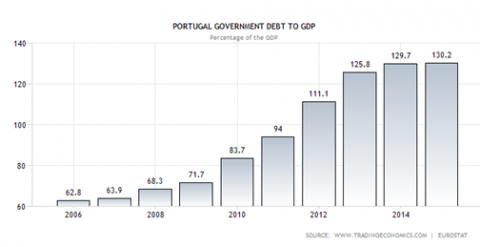 Well then maybe there must be a dramatic deflationary cycle pushing those paltry nominal yields much higher in real terms?

Wrong again! Portugal posted a positive CPI of 0.4% year over year in April of 2015.

The truth is, the ECB would prefer bond vigilantes continue in that deep slumber, while they use artificial intervention to “do whatever it takes” to eviscerate markets and make sure sovereign debt yields never rise.

But eventually investors will wake up to the huge bubble in the bond market that must pop either through inflation, or insolvency. And when yields normalize, it will lead both the stock market and the economy into a depression.

However, the Charlatans in government and financial markets want you to believe the inevitable rising of yields in Portugal (and in the rest of Europe, the United States and Japan for that matter) will be a good economic sign. These manipulators of currencies and destroyers of savings want investors to believe they are privy to some ethereal information that only they are able to decipher. But if that were true, why then have the economic forecasts from central bankers been so incredibly inaccurate throughout history.

Likewise, central bankers also want you to believe that a rise in yields will prompt a great rotation out of bonds and into stocks–catapulting the stock markets to new highs. But higher rates in 2006 did not forebode an economic paradise, and it did not propel a 2008 great rotation out of Mortgage Backed Securities and Collateralized Debt Obligations into stocks. After all, did investors in 2008 run from collapsing real estate and mortgage related bonds into stocks when they became toxic…were they forced to put that money to work into equities right away?

Everyone who lived through the 2008 financial crisis knows that when the air came out of the mortgage bubble there was a lot of collateral damage. And in 2012 when the Portuguese bond market collapsed, investors weren’t immediately scrambling out of bonds in favor of stocks–they were aggressively shunning both during that 2010-2012 timeframe. The Ten-year Note went from 5%-18%, while the stock market was busy losing half of its value. 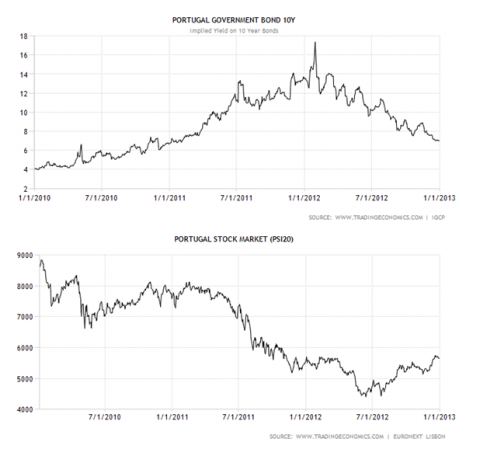 Central Banks around the globe have cranked up their bubble machines and are pointing them directly at the bond market. The Portuguese Central Bank has managed to engineer negative yields even though the nation has a positive rate of inflation and has become basically insolvent. In fact, the international bond bubble is vastly more pervasive and baneful than the NASDAQ and Real Estate bubbles combined. Therefore, when the bubble in bonds finally bursts, at least for a while, there will be very few places to hide outside of cash and owning hedges to plummeting equity and bond prices. And hopefully then we will all, with the perfect clarity of hindsight, acknowledge that allowing a small unelected cartel of market manipulators the power to distort markets to such a degree was a completely stupid idea.