With just one day left before the ECB officially begins buying corporate bonds, the financial world is awestruck by what Mario Draghi has achieved by unleashing an unprecedented demand for ECB-backstopped corporate credit (something we previewed back in March in “BofA Explains Why The ECB Will Be Forced To Buy Junk Bonds“).  As Bloomberg writes overnight, the average yield on investment-grade company notes in euros tumbled to 1.002% on Monday, according to Bank of America Merrill Lynch index data. That’s the lowest in more than a year and a smidgen away from dropping below 1%.

“The ECB is distorting the market,” said David Riley, head of credit strategy at BlueBay Asset Management LLP in London. “There’s a shock associated with yields falling below 1%.” They will likely fall much lower courtesy of Mario Draghi, whose central bank is actively seeking to crowd out investors and make it even tougher to find yield.

Draghi, the ECB president, has been shaking European debt markets since 2012, when he pledged to do “whatever it takes” to save the euro and presented a bond-buying program dubbed Outright Monetary Transactions. He shocked markets with an interest-rate cut in November 2013, and has lowered borrowing costs three more times since then, pushing the ECB’s main rate to zero for the first time ever in March.

Companies benefiting from the lower borrowing costs are issuing bonds at an increasing clip. More than 50 billion euros ($57 billion) were sold in the single currency in May, the second-busiest month on record. Air Liquide SA, the investment-grade French industrial gas maker, issued 3 billion euros of bonds on Monday, with just one of five parts of the deal priced with a coupon above 1 percent, according to data compiled by Bloomberg. 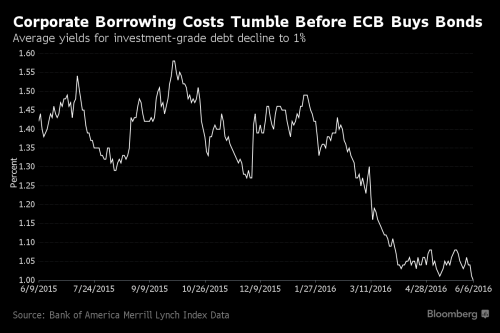 Not everyone is delighted by the ECB’s repricing of the corporate bond market: “we’re on strike when it comes to euro investment-grade paper,” said Gordon Shannon, a portfolio manager at TwentyFour Asset Management LLP, which oversees 6.3 billion pounds ($9.1 billion). “The program has ground spreads down so much that we can’t bring ourselves to buy. We’re buying instead sterling and dollar investment-grade paper, and high-yield bonds.”

Others agreed: “the prospect of average yields below 1 percent is very scary,” said Juan Esteban Valencia, a credit strategist at Societe Generale SA in Paris. “Investors are being pushed outside their comfort zone to sectors like high-yield debt, where they may not have expertise.”  Fear not, Juan, if there is a hiccup in the junk bond market as a result of investor herding, the ECB will simply backstop the high yield space, problem solved.

Bloomberg’s assessment of constant central bank intervention is accurate: “Bond markets around the world are being distorted as central banks step up cheap-money policies to bolster growth and prevent deflation. About $10.4 trillion of government bonds globally have negative yields, with Japan “by far the largest source,” according to a June 2 Fitch Ratings report.”

How this chapter in manipulated markets will end is still unclear, however with central banks backstopping virtually every asset class, it is difficult to see a happy ending especially if and when the much desired inflation materializes and central banks are forced to step back.

In response, some investors are pushing back and even the most conservative firms are turning to speculative-grade debt, traditionally among the riskiest of fixed-income assets. Others have no choice and investors looking for higher yields have been sent searching the world over for decent returns.

Places such as Japan, where overnight a Toyota Motor unit sold yen bonds with the lowest coupon ever for a Japanese company. Toyota Finance Corp issued 20 billion yen ($186 million) of notes at a yield of 0.001%, according to a filing with the nation’s Finance Ministry. That’s the lowest coupon ever for a regular bond by a domestic company that isn’t backed by the government, according to data compiled by Bloomberg. 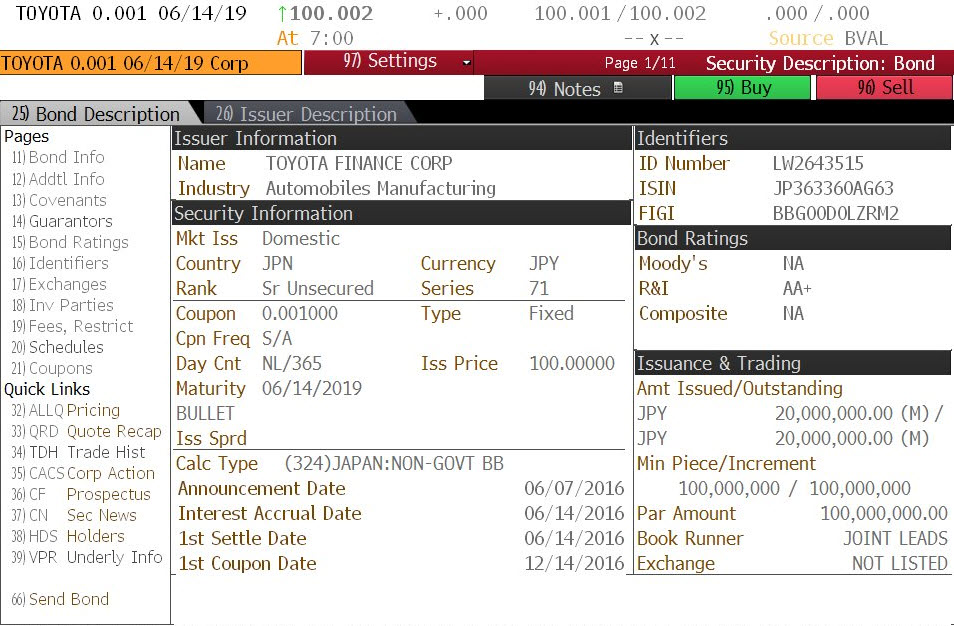 By way of context, Toyota, the world’s largest automaker, last month sold 60 billion yen of debt including 20-year bonds paying a yield of 0.343%. The bond is already trading at a premium to par.

Once again, the record low yield merely reflects the unprecedented monetary stimulus by central banks everywhere, something that is happening even as the narrative blasts daily stories of a “recovery.”

The Bank of Japan has sent yields on Japanese government bonds below zero for notes out to 10 years since adopting a negative-rate policy in January, increasing demand for corporate debt. Average yields on Japanese company bonds dropped to 0.17 percent on Monday from 0.33 percent a year earlier. At this rate of negative compounding, Japan’s debt will pay itself off in a few thousand years.