By Peter Spence at The Telegraph

Most of the actions of central bankers – immensely powerful individuals who steer whole economies – pass largely unnoticed in everyday life.

Late last year, however, the customers of one small Swiss bank were among the first to confront the problems these monetary policymakers are now facing.

Alternative Bank Schweiz (ABS) was the first lender in the world to pass on the costs of “negative interest rates” to its customers. As central banks run out of traditional tools to tackle tepid growth and low inflation, negative rates have been the latest weapon of central banks.

The Swiss National Bank (SNB), like others around the world, has slashed its interest rates below zero in an attempt to support economic growth and inflation. As a result, commercial lenders must now pay to deposit funds at the central bank.

ABS clients were told they would be charged money to keep cash in a current account as of this year. Customers with more than SFr100,000 (£70,000) would face an even steeper rate. 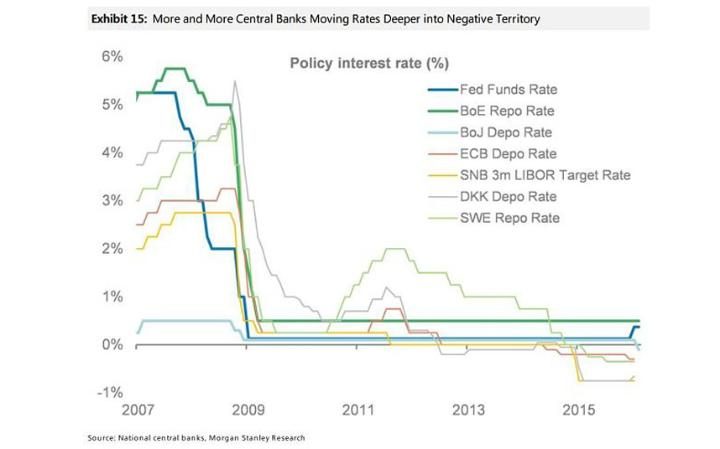 If you had told policymakers that this state of affairs would come to pass even a decade ago, many would have scoffed. Who would choose to keep their money in the bank if they had to pay for the privilege?

But for policymakers, this idea may be all they have left. As they have run out of room to cut interest rates above zero, and their quantitative easing schemes have become increasingly unpopular, central banks have had to turn to other means.

Forcing people to face sub-zero interest rates, in theory, should boost the economy. Rather than face fees to keep their money sitting in an account, companies and consumers should prefer to invest it in more rewarding ways, or to spend it.

Alarmingly, traders and analysts are now worried that even negative rates will not be enough to keep us going through the next economic crisis, whenever it arrives. In total, five central banks have now turned to negative rates – those of Denmark, the eurozone, Switzerland, Sweden and most recently Japan.

However, as fears that the world could be heading for another downturn have risen, so have concerns that negative interest rates will not work. As financial markets were battered by nerves over China’s growth outlook and sinking oil prices, investors were also fretting about the impact of negative rates on the viability of commercial banks.

These lenders earn money on the difference between the interest rates they pay on customers’ deposits and how much they make on their own investments. As central bank interest rates fall, so does that return. But private banks have been unwilling to pass on negative rates to their customers, eroding their own profits.

In effect, negative interest rates act as an additional tax on banks. ABS bossMartin Rohner said the SNB’s introduction of negative rates had cost the lender “pretty much the equivalent of our entire annual profit” for 2014.

Economists at JP Morgan have suggested some central banks might be able to push their rates as low as minus 4.5pc. Malcolm Barr, an economist at the investment bank, says G7 central banks historically have cut their rates by around one percentage point in response to an industrial stagnation of the kind we appear to be witnessing. 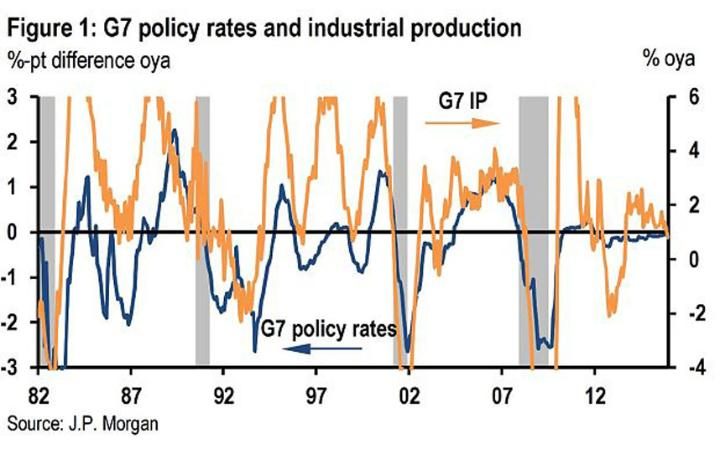 If things get worse, and developed countries slide into recession, “the normal policy response would be more than this size”, Barr says. He believes negative rates have worked “broadly as expected in Europe”, with little or no sign of banks or others beginning to hoard physical cash.

“Central banks are learning by doing as they explore these uncharted waters,” he says, playing with a policy tool that could become a “powerful” instrument for central bankers to wield in the future. “It appears to us there is a lot of room for central banks to probe how low rates can go,” Barr concludes.

Many are worried, however, that policymakers are already pushing the boundaries. Morgan Stanley has described them as a “dangerous experiment”. Rather than merely doing very little to help, negative rates might soon end up doing more harm than good.

Policymakers appear to be aware of the risks. Nothing else can explain how carefully they have tip-toed around the issue. While central banks have tended to increase their rates by quarter of a percentage point at a time, they have been far more cautious on the way down.

Officials have moved tentatively, nibbling away at their interest rates, cognisant that things could easily go wrong. Dario Perkins, an economist at Lombard Street Research, says that policymakers are “fairly nervous about the impact negative rates will have”.

“Go back a couple of years and they didn’t think they could go below zero at all,” he says. Negatives rates have “failed to curb currency strength, raise inflation expectations and boost equity markets”, according to calculations by Bank of America Merrill Lynch. 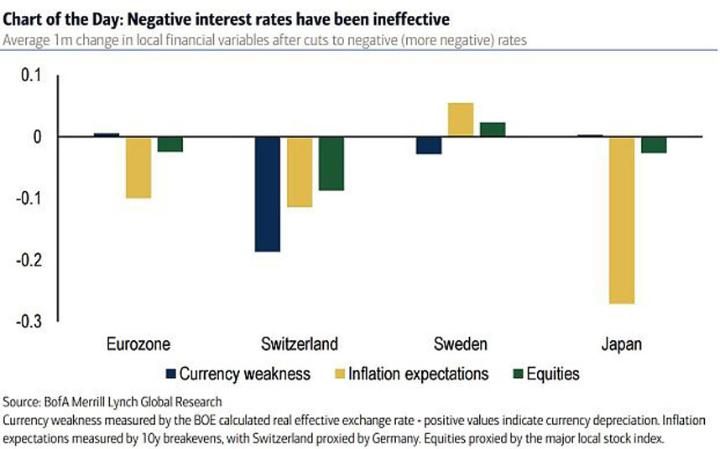 “Negative interest rate policy has been ineffective as the market currently interprets it as policy exhaustion,” says Christopher Xiao, a currency strategist at the US bank. Rather than stimulate growth and inflation, negative rates are a sign that central banks have nothing left to throw at the problem of weak demand.

Narayana Kocherlakota, former president of the Minneapolis Federal Reserve, has said that “going negative is daring but appropriate” in the US, given the weakness of inflation. However, “it is a sign of a terrible policy failure by fiscal policymakers”.

As politicians have cut back on borrowing, or fiscal policy, it has been up to monetary policy to step up and support economic demand.

The full set of possible monetary policy tools – only a portion of which have been wielded by central bankers – provides near unlimited capacity to raise demand and stoke inflation. However, central bankers have been instructed not to use some of the most powerful weaponry.

Tony Yates, professor of economics at the University of Birmingham and a former Bank of England economist, says “conventional policy is sort of exhausted”. Interest rates cannot be reduced aggressively from where we are now, even if there is a little wiggle room.

While policymakers no longer believe the lower bound for interest rates is zero, the basic components of the “zero lower bound” are still there, he says, just modified slightly by the costs of storing cash. Central bankers may be putting undue focus on negative rates, he suggests. “What’s the point of trying to squeeze blood out of this fairly unpromising stone?”

Meanwhile, “unconventional policy is maxed out for political reasons”, says Yates. Central bank asset purchases have totalled $12.3tn (£8.6tn) since Lehman Brothers collapsed in 2008. Much of that has consisted of the government bonds central banks have bought up as part of their quantitative easing schemes.

Perkins does not believe policymakers will reverse their course on negative rates if things get really dangerous, and instead decide to inject fresh QE in an attempt to stimulate inflation. However, the public perception of QE has turned uniformly negative, and doing more of it may achieve little.

Central bank purchases of sovereign debt have led to a tremendous rally in their prices and a corresponding fall in the returns these bonds offer. As a result, bonds have been less attractive to investors, as their yields have dropped. This has encouraged them to move into other riskier and more rewarding investments. However, now that yields are already at rock-bottom levels, driving them even lower is unlikely to have an impact.

But this need not be the end of the road. Having tapped out sovereign debt markets, moving into buying corporate debt is an obvious place to go, suggests Yates. “That’s the easiest thing to buy without too much trouble, and for which plans probably already exist,” he says. “If things got really awful, getting into equity markets would be something you’d want to consider too.”

If more QE is unpopular, then buying tradeable loans from the world’s largest companies, or even their shares, is likely to be even more so. However, politicians and policymakers may have already exhausted anything that has a chance of working and will not damage their reputations.

Economists and financial markets are crying out for politicians to reverse course on one thing that many are certain we will not get: fiscal stimulus. The world is “only going to get fiscal policy in a very deep recession”, says Perkins.

Interest rates on the government of debt of many economies have fallen to historically low levels in recent weeks. Across several developed economies, it is cheaper for governments to borrow than ever before.

Gabriel Sterne, head of global macro research at Oxford Economics, says “some governments are under intense domestic pressure to loosen the fiscal belt; and low global yields have made it cheaper to do so”.

However, the countries with governments that want to spend more and those with the space to do so rarely match up.

Oxford Economics identifies France, Italy and Japan as economies that have a political pressure to expand, but are already debt-laden. Meanwhile the US, UK and China might be able to increase government spending easily, yet each has a political climate that opposes further borrowing.

It would be best if politicians could agree on which option they’d prefer now – choosing to hand over greater powers to the central banks or electing to borrow more funds to pile into infrastructure projects. If they hold off, they may find themselves having to make decisions far too quickly during the next crisis, whenever it hits.