I observed a long time ago that the primary prerequisite for being a central banker was to be delusional, to believe in conomic myth, as opposed to observing and accepting reality. Naranya Kocherlakota of the Minneapolis Fed is a perfect example. He told the Fanatical Times this week that ” With inflation running below the 2 per cent target for a couple of years it is essential to take “ongoing action” to maintain the credibility of the Fed’s inflation goal.” What he meant was that the Fed should have kept printing money. This is the conventional conomic wisdom, all of the evidence to the contrary notwithstanding.

Prior to this week, the Fed hawks, essentially Fisher, Plosser, Lacker, and George, with one or another rotating in from time to time, had been presented as the outsiders in the debate over ending QE and ZIRP. I had felt since last year when Bernanke announced The Taper that the hawks had won the argument and had set the course of policy. In my years of Fed watching, I have observed that in the dynamic tension between the Fed’s words and its deeds, watch not what they say, watch what they do. That’s where the truth lies.Their words are for show. Their actions are for dough.

Yellen proved that the idea that tapering would be data dependant was a sham when she ignored the weak first quarter GDP. The hawks had won the argument and were in the ascendancy but acquiesced to allowing the appearance that the Doves were still in control. Fedheads spoke in platitudes designed to manipulate markets, but their actions were clear. They were shutting down QE, come hell or high water.

When this week’s FOMC action closed out the straight line process of ending the Fed’s outright purchases of Treasuries and MBS (but not MBS replacement purchases) the tables were turned and it became clear that the doves were in the backseat all along. Now a dove was the lone dissenter. The Fed gang trotted out Minneapolis Fed tribal chief Kocherlakota to make the case that, “They’ll be back.”

The sham is to now present the doves as the outsiders, but to get the message out that maybe the Fed will bring back QE if inflation doesn’t pick up or if the markets weaken. The idea again is to soothe the markets into continuing to somnambulate to the upside (unnecessary because the BoJ is providing the funds to ensure that they do).

Here’s the problem. Nowhere in history is there a shred of evidence that QE and ZIRP stimulate CPI inflation. Central bankers, led by madman Bernanke, have made up this destructive gambit out of a rewriting of history to say that the Fed caused the 1930s Great Depression by being too tight. But since running this mad high school economics term paper experiment it has become clear that, while promoting asset inflation, QE and ZIRP suppress CPI inflation, contrary to intention.

We have seen how QE/ZIRP benefit the privileged few while penalizing everybody else, because the greatest suppressive effects have been on the market value of honest labor, which means that not only is the policy counter effective, it is immoral, and erodes the ethical basis of a just society. It rewards wild speculation and even financial fraud, while penalizing hard work and thrift.

The evidence of the past dozen years of policy experimentation with ZIRP and QE is this. When the Fed cut rates from 1.75% to 1% over the course of 2003 and through mid 2004, CPI inflation fell from 3% to under 2%. Meanwhile, the financial stimulus caused housing and stock prices to radically inflate. In the current period, US median house prices have risen by 27% since 2011, and stocks have risen by 169% since 2009. 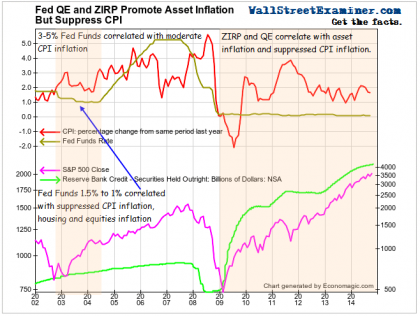 How have wages done? Real wages have risen less under ZIRP and QE than they fell as they followed the Fed’s rate cuts lower. As the Fed cut rates from 5.25% to 0.25% in 2007-08, real wages fell sharply. They continued to fall for another year after the Fed had instituted ZIRP. Overall as the Fed was cutting rates, real wages fell by 9.7%.

Only in 2010 after the economy began its bungee rebound did labor rates begin rising again. But since then they have only risen by a total of 6.7%. That’s less than the 9% rise in the 2003-2007 period when the Fed was raising the Fed funds rate from 1% to 5.25%.The market value of labor today is still less than it was in the fourth quarter of 2008. The evidence shows that ZIRP and QE do nothing to help the labor market, and probably contribute to suppressing it by rewarding financial engineering more than real investment in growing a business and expanding employment. 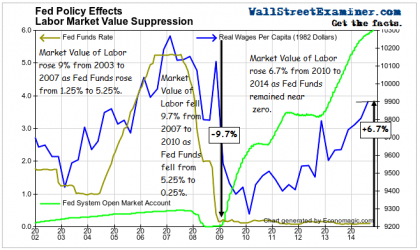 To conomists and central bankers, asset prices don’t count as inflation. These doctrinaire fanatics only recognize consumer price inflation as being “inflation.” The inflation of asset prices is called something else– “appreciation.”

Thanks to their stupid word games, in their religion, conomists believe we need more inflation. They also believe the Conomic religious dogma that ultimately printing enough money will eventually spur inflation of consumption goods. Japanese central bankers have been among the key proponents of that groundless idea. Where has it gotten them? To the point that most conomists eventually reach– if one of their religious theories isn’t working yet in the real world, it must be because we just haven’t done enough for long enough. Like most religious fanatics, they would rather kill everybody else before admitting that their beliefs are false. This is the delusional thinking and behavior that almost all central bankers and conomists share.

These people are insane. I rest my case.