Chaos Coming To A Market Near You This Summer

This month the Fed is adding $23.4 billion in cash to Primary Dealer Trading Accounts in the period April 12-20. This is slightly more than the March addition of $21.9 billion, the smallest add since January 2016. It was a sharp decline from February’s $41.6 billion.

You may have thought QE ended in late 2014, and it did, but the Fed has continued to add cash to the financial markets every month. It does so via the purchases of mortgage backed securities (MBS). It calls them “replacement purchases.” The Fed is the bank for the banks, i.e. the central bank. It has resolved since 2009 to force trillions in excess cash into the banking system and make sure that that money stays in the system. It has also resolved to make sure that the amount of the cash in the system does not shrink. It does that each month via its program of MBS replacement purchases.

When the Fed buys MBS to replace those paid down from its balance sheet, it does so via trades with Primary Dealers. It buys MBS via forward purchase contracts which are typically settled in the next month or the following month. The Fed is only keeping the amount of its assets level. But it pumps billions in cash into the accounts of Primary Dealers each month as part of that process.

The dealers are in the business making markets in a broad spectrum of securities, including MBS. Their biggest customer is the Fed. When the Fed cashes out the dealers by purchasing MBS from them, the dealers can both leverage and redeploy that cash to not only buy more MBS, but to purchase whatever other securities it wants to. Stocks are a favored vehicle. The Fed cashes out the dealers when it settles the MBS purchases around the third week of the month each month. Even though the amount of cash in the system is roughly static, the Fed is still pumping cash into Primary Dealer accounts each month. That has an impact on the stock market. It’s obviously not the only impact, but it’s still part of the central bank game of rigging the market. 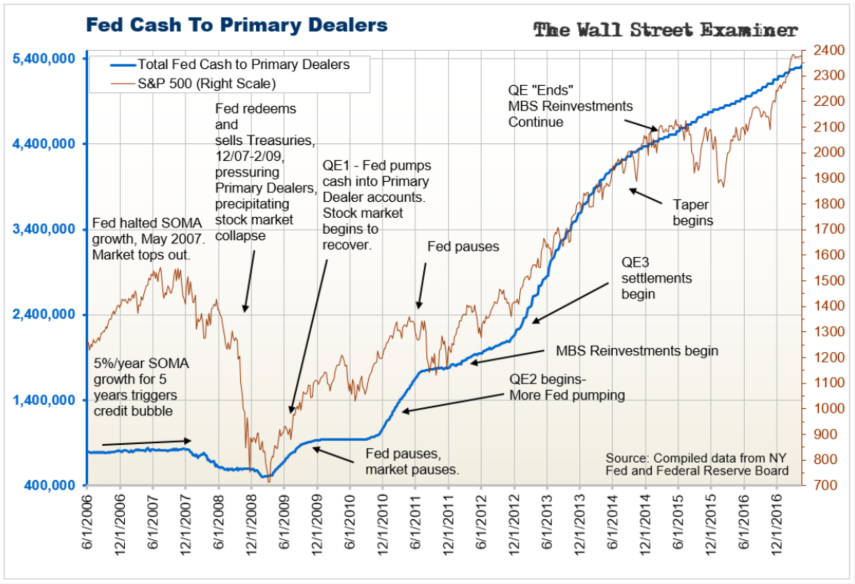 The Fed holds about $1.8 trillion of these MBS on the asset side of its balance sheet. That amount would decline every month as a result of the regular flow of mortgage payoffs. That flow fluctuates based on market conditions. When you sell your home, the buyer uses the cash proceeds of a new mortgage to pay you cash you use to pay off your mortgage. That mortgage may well be part of an MBS pool owned by the Fed. As homebuyers pay off thousands of old mortgages each month, the Fed’s holdings of MBS decline.

Likewise, if you refinance your mortgage, the funds from your new mortgage will pay off your old mortgage. Refinancing activity also results in the paydown of the Fed’s MBS holdings each month. When mortgage rates fall, refinancing activity increases. When rates consistently fall to new lows as they did from 2014 to mid 2016, refi activity booms and the Fed’s MBS holdings fall faster. The Fed then had to increase its MBS replacement purchases. Refi activity reached its peak in the July-September period last year when mortgage rates hit their lows around 3.4%. Then rates rose and refi activity shrank. The Fed’s replacement MBS purchases followed a few months later. 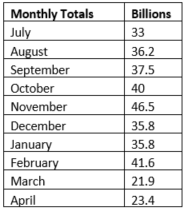 Each month the Fed replaces the MBS paid down from its balance sheet with purchases of new MBS in the amount that was paid down the prior month. In so doing, it keeps the level of its assets roughly level. The other side of that coin is that it keeps the level of cash in the banking system level. That banks hold that cash as reserves in their accounts at the Fed.

There is a lag of 5-6 months between the drop in mortgage rates and the increase in the settlement of the Fed’s replacement purchases. With mortgage rates coming off their recent highs this month, there will be a slight increase in refi activity. That causes an increase in MBS paydowns, which the Fed will replace in the next month by buying MBS from the Primary Dealers. Then it takes another month or two for those purchases to settle.

By then the Fed may have begun to implement its proposed policy of “normalizing” the balance sheet. That’s a nice way of saying “shrinking” the balance sheet. To do that the Fed is proposing to allow its Treasury holdings to mature and not be rolled over. It’s also proposing not replacing its MBS holdings as they are paid down. So instead of a small addition to the Fed’s MBS purchases from the Primary Dealers a few months down the road, the Fed will indirectly withdraw money from the banking system and the markets by allowing its MBS holdings to be paid down rather than replaced. Its assets will shrink and the reserve deposit liabilities backed by those assets will disappear. There will be less cash in the banking system.

By doing it slowly over several years, the Fed may be able to avoid crashing the market. I use the word “may” with reason. Any shrinkage of the Fed’s assets will increase the odds of an accident. Slow and steady tightening will act like the drip, drip, of a Chinese water torture. It will promulgate a bear market in stocks. Accidents do tend to happen in bear markets. The drip, drip, drip eventually drives the market into a panic.

I have written over the past few years since the Fed started talking about raising the Fed Funds rate that we’ll know the Fed is really serious about tightening monetary conditions when it starts shrinking the balance sheet. Raising interest rates won’t stop a bubble, but removing money from the system will. Right now the Fed is in the signaling stage. They’re talking about it. When the Fed talks about an idea, it eventually gets around to doing it. The Street is already telling you it will be no big deal. Don’t believe it. I would be selling the rallies.