Comparing the growth in the number of full time jobs versus the growth in new home sales starkly illustrates both the horrible quality of the new jobs, and how badly ZIRP has served the US economy.

Growth in new home sales has always been dependant on growth in full time jobs. For 38 years until the housing bubble peaked in 2006, home sales and full time jobs always trended together, subject to normal cyclical swings. With the exception of 1981-83 when Paul Volcker pushed rates into the stratosphere, new home sales always fluctuated between 550 and 1,100 sales per million full time workers in the month of March. 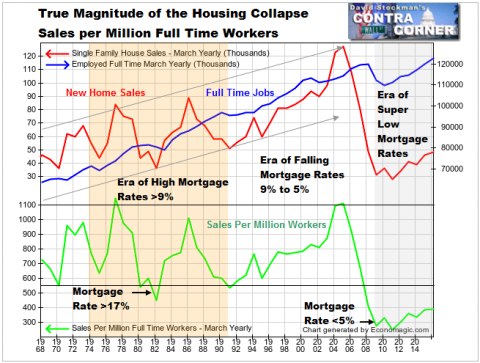 ZIRP has actually made the problem worse. It has caused raging housing inflation which has caused median monthly mortgage payments for new homes to rise by 20% since 2009. ZIRP has enabled corporate CEOs to game the stock market to massively increase their own pay while encouraging them to cut worker salaries and shift higher paying jobs overseas. That leaves the US economy to create only low skill, low pay jobs that do not pay enough for workers to be able to purchase new homes.

The perverse incentives of ZIRP are why the housing industry languishes at depression levels.