Chart Of The Day: Wage Growth Rate Was Cut 50% After ZIRP/QE

We’ve been hearing noises that wage gains for US workers are picking up. It seems to be coming from analysts who are cherry picking data points to suit their point of view. So, I figured, “Gee, let’s make a chart of that to see if it really is true.” Here’s that chart. 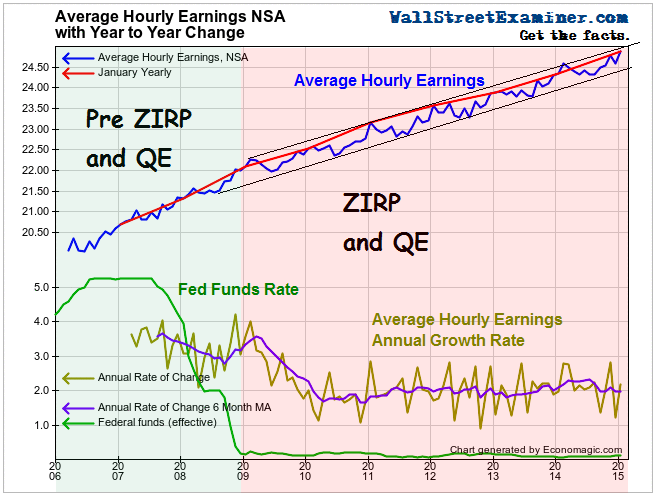 It turns out that wage growth was cut in half when ZIRP and QE were instituted, and nothing has changed ever since. Absolutely nothing.

There’s a reason for that, which I have written about for several years. It’s a reason that you will never hear uttered by Fed cheerleading, corporate lackey, fake journalists and conomists in the mainstream media. The reason is that ZIRP and QE actually suppress wage growth. They do so because ZIRP and QE allow, promote, and encourage corporate executives to come up with financial engineering schemes that enhance their own compensation. They divert funding resources to these schemes and away from investing in their businesses and their workers. The most blatant of these schemes is the sordid cycle of granting stock options to themselves and then ordering stock buybacks to ensure they get the highest possible price for their scheme. Ben Bernanke, the Meyer Lansky of central bankers, promoted this ripoff cycle when he instituted ZIRP and QE, then extended it time and again.

What will happen if you take away the ability of CEOs to use endless free money to concoct cheap financial stunts to increase their already obscene wealth while suppressing the wages of their employees? They might, just might, see some benefit in investing in their businesses and workers instead of cheap tricks, to grow their profits. It’s not guaranteed, but seeing what has happened under ZIRP and QE, we have to ask to what end the Fed greased the skids for this massive corporate heist in broad daylight in the first place. Was it corruption, or was it just delusional short sightedness? And in the end, was it really worth it?

While moving slowly, at least Janet Yellin, to her credit, is moving to end this long running obscenity.